Indulgence and Nutrition — What to Eat in Belgium

Disclaimer: the author is not responsible for one’s accidental feeling of hunger and impulse to buy tickets to Belgium. 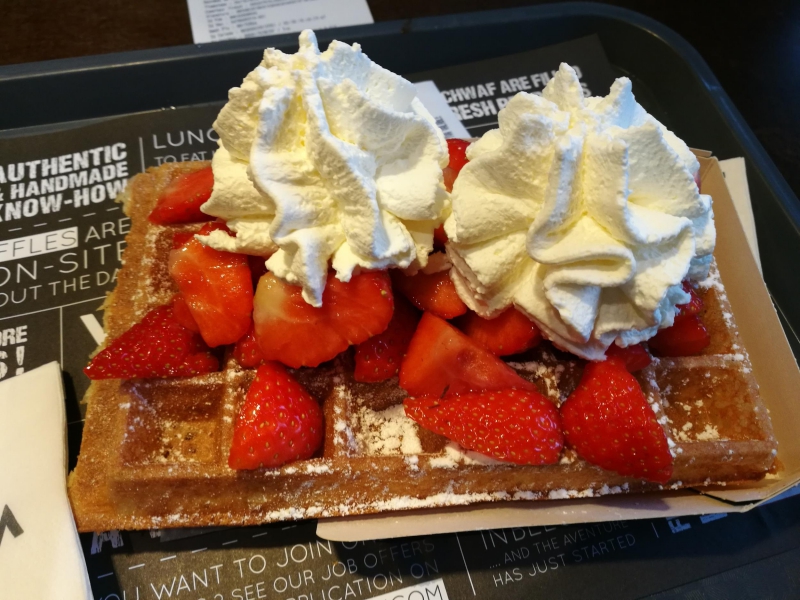 Whenever we hear "Belgium", what’s the first thing that comes to mind? Beer, waffles and fries, right? This post is not about the beer as it’s a whole different topic on its own, when the two latter will be discussed below. And not only ;)

Upon arrival in Brussels, the first things to try are the most stereotypical ones — fries and waffles. Well, that’s a start. There’re only two types of traditional waffles — Brussels and Liege ones. They differ in texture, shape and size. Brussels waffle has a rectangular shape, is quite big and is airy inside. Liege one is dense, has an oval shape and is relatively smaller compared to their counterparts from Brussels. My personal preference goes to Liege waffles completely :)

Both types of waffles are sweet and are served with whatever topping one prefers. The most common ones are: sugar powder, whipped cream, Liege syrup (my favourite), chocolate syrup, Nutella, Speculoos, fruits and berries. There’re, however, variations to everything — you can find Liege waffles with bergamot or caramel, waffines (sort of waffle cookies with filling) and lunch waffles. As you see, having a full meal with only waffles won’t be an impossible bullet point on your bucket list. However, those fancy waffles with tons of toppings are mostly for tourists, Belgians themselves prefer the simplest versions of them.

So, where to try waffles? I’d say Liege for authentic Liege waffles. In Brussels, almost any place, I prefer Waffle Factory.

Another stereotypical Belgian food is fries. And yes, fries here are claimed to be called "Belgian" and not "French", which is important to remember! There are hundreds and hundreds of places serving fries in Belgium — that is kind of a snack you won’t be left without. Actually, fries here can serve as a whole meal as they are different from what we are used to in Russia (as we mostly eat it in fast food chains). Here, the fries are thicker and bigger, oil and/or fat is of a high quality and they are not salty (almost at all). The perfect combo for fries would be a sauce, a drink and a breaded piece of cheese or meat.

Fries from the cafeteria at Vrije Universiteit Brussel

Where to try? The best ones so far have been in Ghent and Bruges. In Brussels, I prefer Fritland and VUB cafeteria.

When you’re done trying waffles and fries, you might recall that Belgium is also famous for its chocolate. And when you arrive here you won’t be able to forget it — chocolate is everywhere. From the classic milk and dark chocolate to the craziest tastes and shapes, chocolate can be found in shops. There are so many of them because of tourists and here’s a life hack — almost every shop offers free samples to try. When you’re on a street of such shops, you can easily stuff yourself with sweets so much that even your additional stomach for desserts will be full. I’m not a big fan of chocolate, so haven’t tried a lot of tastes.

A chocolate shop in Bruges

Where to try? Basically, everywhere, but mind the price. The highest density of shops is spotted in Brussels and Bruges.

What is also promoted to tourists a lot and is a traditional Belgian meal is mussels. I haven’t tried them as I’m not a big fan of seafood. Looking at the prices, mussels are from 15 euros the cheapest (mostly around 20) if eating out. If cooking yourself, a store-bought package of mussels will cost 10 euros.

Packaged mussels from a Carrefour store

So far, it’s all been about "tourist" food. What about daily meals? On a daily basis I eat in VUB cafeteria when at uni and cook for myself. Here in Belgium, it’s overly expensive to eat out, when yourself you can cook something delicious and nutritious under 5 euros for sure.

Speaking about the VUB cafeteria — it’s an amazing place. ITMO has a lot to learn from it. What positively surprised me here is the mixture of a high quality of meals and respect to so many diets and preferences. Every day there’re options to have pasta, wok, veggie, fish, menu 1 or menu 2 meals and a soup (included in the price of any meal) in a free-flow section; different sandwiches and desserts are available upstairs. And it also helps you to discover traditional Belgians meals ;)

A menu meal at the VUB cafeteria (meatballs in tomato sauce, green beans, mashed potatoes and salad). There could also be a soup but it was a way too much for me.

One example above — meatballs. This meal might seem Swedish but it’s traditionally Belgian as well. It’s even served with berry sauce as an option. Another example — chicory rolls with ham in cheese sauce. At first I was like — what, chicory? I only knew chicory root in the form of an instant drink (my father drinks it)… As for the taste, it’s more of ham and cheese, and the chicory itself is quite tasteless.

Another famous Belgian thing is Brussels sprouts. Those tiny cute cabbages, yes. They are tasty both fresh and cooked!

There’s a lot more to Belgian national cuisine than that. Thanks for reading this long post! Now go get yourself a treat, you must be craving for something tasty right now! ;)