Starting today, prospective students of ITMO University can submit their application by visiting the coworking and library spaces at the university’s Lomonosova St. 9 campus. Moreover, you can apply online by signing up on the official ITMO admissions website. 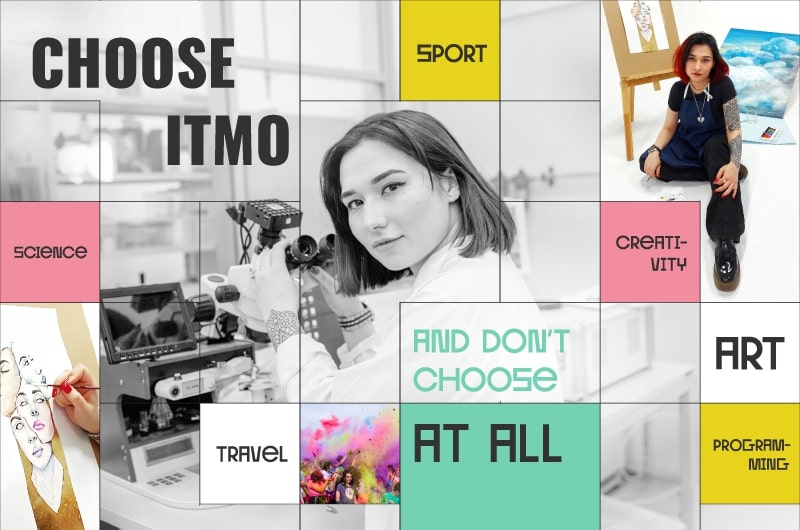 This year’s motto is “choose ITMO and don’t choose at all.” The philosophy behind the slogan is that at ITMO University, you can be both into STEM and humanities, perform well academically and achieve great results at sports, do research in the daytime, and perform at the Quantum Potential, ITMO’s science stand-up show, in the evening.

ITMO University is all about unconventional education, interdisciplinarity, and individual learning tracks. Choosing a faculty and a program isn’t a life-defining decision anymore – it’s just a step towards your true self.

“We’re always interested in unconventional approaches and extraordinary people who are ready to change the world. The whole idea of “choosing your life path” isn’t relevant anymore: the new generation transforms constantly and aspires to develop all of their talents at the same time. Modern higher education isn’t about choosing a direction to follow until the end. It’s about immersing yourself into the vast ocean of opportunities where everyone can find their unique goal and a path that leads to it. Our task is to provide students with as many tools as possible to help them conquer their own Everest,” says Daria Kozlova, ITMO’s First Vice Rector.

Chatbot as a friend and helper

We have also launched ITMO – Check! (in Russian), a chatbot that helps applicants learn the key info about the admission process and the university’s structure, as well as find out everything about the opportunities available at ITMO. It’s not just an FAQ but an immersion into the life of a real ITMO student.

Using this chatbot, you can meet one out of four people: Klim Gavrilov, a student at the Faculty of Software Engineering and Computer Systems, who studies industrial design and is an FIA trophy-winning race car driver; Landysh Fatkhutdinova is a PhD student at the Faculty of Physics who works on the synthesis of calcium carbonate for targeted drug delivery and is building a career in academia; Maria Vandzhurak, a student at the Faculty of Biotechnologies and the head of ITMO.Punchline club, organizes university events, makes TikTok videos, and performs on stage; Alexander Shorokhov is in his final years of studying at the Faculty of Technological Management and Innovations and is an intern at Coca-Cola HBC, as well as a musician at the ITMO Rock Club.

According to Alexey Itin, executive secretary of the Admission Office, it’s important to not only share information about ITMO as one of the universities to apply to, but also to support applicants in this stressful period and distract them from their worries.

“In our Telegram bot, real students answer questions about studying at ITMO, the extracurricular activities available here, our labs, coworking spaces, cafeteria, etc. We wanted it to be something not artificial, but similar to talking with a real person. That’s why we asked active students to share their thoughts and experiences. Of course, we looked for prominent students – not every university has a student like Klim Gavrilov. Plus, diversity was important to us: some of them are into science, others, like Klim, do sports, yet others are into art.”

This year, you can apply in four ways: by visiting ITMO in person, via mail, by signing up on the admission website, and via Gosuslugi. Moreover, you don’t need to provide original versions of the documents anymore – you can bring them in after you’ve enrolled. The last enrollment list for Bachelor’s students will be published later than usual, on August 17.

This year, Bachelor’s students won’t have to wait for the second stage of admissions because the enrollment will take place only in the priority admission stage (for contest winners and applicants falling under special quotas and target admission) and the primary stage.

The number of available places has increased both for Bachelor’s (1,108 places in 2020, 1,277 in 2021) and Master’s studies (2,677 places in 2020, 2,793 in 2021). There are also several new programs, such as Bachelor’s programs Infochemistry and Energy Efficiency and Renewable Energy, as well as Master’s programs Infocommunications and Digital Media and Public Health and Clinical Epidemiology.

When it comes to Master’s studies, the number of contests through which you can be enrolled without passing entrance exams has also increased. In addition to the I am a Professional contest, the Portfolio Contest, and the competition of the National Technology Initiative, we have launched HACK FOR YOUR SUCCESS for programs of the Faculty of Software Engineering and Computer Systems, as well as a contest among the winners of It’s Your Call! forum and the contest A Step to Success organized by ITMO’s Research Center for Bioengineering jointly with Gazprom Neft, and several others.

Choose ITMO and don’t choose at all!