Study in the Country of Icecream Palaces and Borsch

It’s not every day you see a Frenchman walking the halls of ITMO, casually speaking Russian with his classmates. Nicolas Charlon isn’t just any Frenchman though, he speaks four languages fluently, French, Polish, Russian and English. When he views Russia he perceives opportunity, a potential future and a chance to grow. He appreciates the wonderful people and the fact that Russia isn’t quite Europe. After an exchange trip during high school to a small town south of Moscow, he knew he wanted to come back for something more. 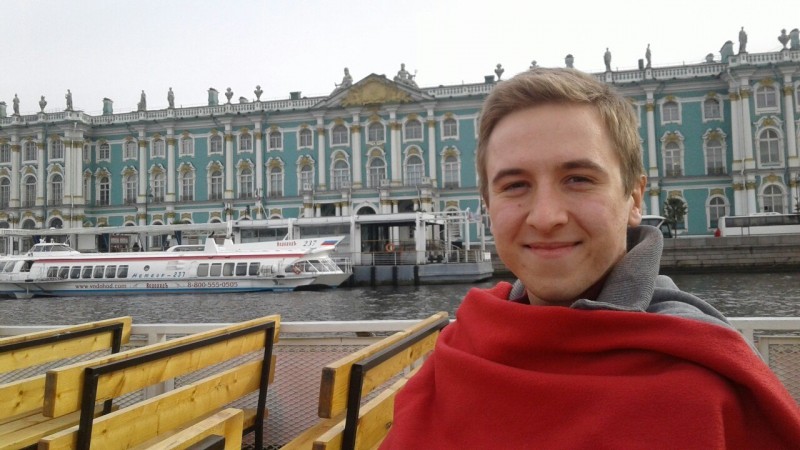 Student exchange is an excellent opportunity to capture the essence of a new culture and academic experience. His choices were limited to U.S. and Europe, and since "the U.S. is like living in Europe but with guns", Nicolas yearned for something different. So he asked if he could go to the country of ice-cream palaces and gingerbread cottages. Lucky for him, his university had connections with ITMO, and they were easily able to organize for him to come and study biotechnology here. Though Bachelor’s students in France study for one year less, everything was organized in such a way that now he’s both a third and fourth year student.

Being in two groups at the same time bodes well for our Frenchman, speaking four languages is a great plus and he gets along well with both international students and his fellow Russian peers. He says "there's a stereotype that Russians are cold, which to some extent is true, but once you know each other they’re really open and that’s cool." Having a wide diversity of friends isn’t the only thing that Nicolas enjoys in Russia, he also loves the architecture in St. Petersburg. "I like all the details on the buildings, I like that St. Petersburg is a city near the sea, so all the buildings are linked to the sea, the boat ride is fantastic and you can see all the bridges." Nicolas was brave enough to go for the full Russian Academic experience, rather than enrolling in an English course, which is typical of most European students, he went for a semester of biotechnology in Russian, which he says isn’t that difficult. "In France I was really good at Russian," he says, "but now I have to learn the specific vocabulary of biotechnology… the main struggle is learning the vocabulary".

While the new vocabulary requires a bit of extra effort, Nicolas comments that the grading system is different and maybe better, although it requires the student to plan for the semester a little differently. "In France, your grade is usually out of 20 and most people don’t get higher than 15. It’s much harder to get a high grade. You usually only have two tests in a semester and the final test is very important. In Russia, there are many mini-tests, and the grade is out of 5. Getting a 5 is not uncommon, and because of all the mini assessments, you have a lot of ways to get a good grade."

What’s both great and unusual about living in Russia though, explained Nicolas, is that on each street corner, you’ll find old women selling their goods. "It's really interesting", he says, "you don’t know where it comes from but here it is, sometimes I buy things from them, I bought onions recently." It’s not just the onions sold in cash, buy the lady on the street that he finds surprising; he’s also made some discoveries in local cuisine. "I've tried everything, I’ve even tried things that Russian’s haven’t tried, pumpkin juice for example, it was really disgusting!" He says there are lots of things he enjoys eating, and assures the readers that there are more delicious soups in Russia than just Borsch. When it comes to young people, Nicolas says that they share the same mentality everywhere, but in general, Russians and French have a different mentality. In France people are more international, you could even say more open-minded, so you can't find a "real French person", "but in Russia you can find the pure Russian soul, a lot of people share the same ideas in this country and they really love Russia, people are very patriotic." But when it comes to everyday life, people are much the same. In France you see people running around, never having time to do anything, they’re really dedicated to work, it’s much the same here.