When we met Dheya Al-Saeedi, we were struck by his positivity, ambition and hope for the future, especially as he began to reveal his history. Still young, he has experienced what many hope not to experience. For those of you who don’t know where Yemen is, it’s on the southwestern tip of the Arabian Peninsula, wedged between Saudi Arabia and Oman. It also has its fair share of issues. The south wants to separate from the north and the country is in a constant state of war. It’s also the poorest country in the Arabian Peninsula. 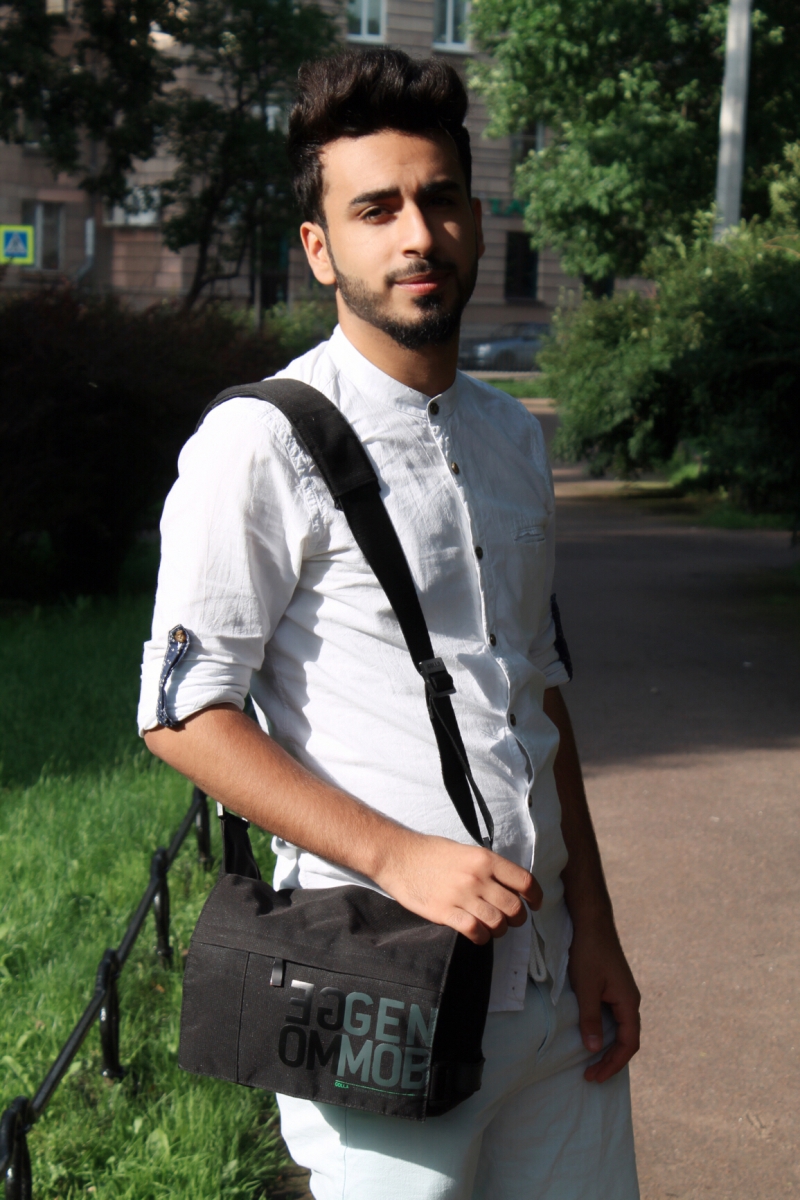 Having lived in a number of countries before finishing high school, including finally Malaysia, where Dheya was stranded during the war in Yemen, he came to know about a special scholarship provided by the Yemeni government to go and study in Russia. While hopeful, it wasn’t as easy as it might sound. As it was the beginning of the war, all flights to Yemen had been cut off, but there were Yemeni’s stranded in different countries around the world, so a few emergency planes were arranged that flew in. Dheya was on one of these from Malaysia, and landed in the South and drove the dangerous route to the North of the country. At a time of upheaval between the north and the south, this isn’t something people usually do. His memories of the time, sleeping and not knowing if you will wake up, the house shaking, windows breaking, sleeping in the hall in the middle of the house, sometimes in the basement, no electricity, it takes its toll on you. Within this raging war and struggle, the Russian ambassador for Yemen met with a group of about 77 bright and talented potential students. Many of them were from villages and rural areas, and Dheya volunteered to be the group leader and to supervise them, ultimately the link between the Russian embassy and the students. They were offered scholarships to study in Russia, but to make their way here also involved a fresh wave of struggles. The students boarded two buses which took them on a 28 hour ride to the border of Oman.

"The whole road we took, was full of danger and conflict… it was so scary because we saw and heard the rockets and bombs around us. I was responsible for the safety of the students, so I was afraid for them… Those 28 hours I didn’t sleep at all, I was so worried about the students."

Once they got to the Omani border, they were remarkably treated so well by the border officials. So finally Dheya could sleep on the remaining 20 hour journey to the capital Muscat. In the Russian Embassy in Muscat, the altogether 77 students received their visas, and headed to Moscow over two consecutive days. These students were to be distributed across various cities in Russia. On their arrival to Moscow, representatives from the Yemeni embassy greeted them and they all purchased tickets to their next travel destination. For some, who had come from the villages of Yemen, this was the first they would know about where they were going to live for the next five years of study. Surely those who were sent to the middle of Siberia got a surprise of their life.

Five of them came to St. Petersburg and spent their first year studying Russian at the National Mineral Resources University. About his first impressions of St. Petersburg, Dheya says

"I never dreamed of living in such a city, such beauty, it’s like an open museum, every time I go on the streets I’m amazed as I’m looking around me. I don’t like taking transport, I like to walk from here to my home on Petrogradsky Island, walking takes me an hour but it’s so nice." It’s not just the city he likes, Dheya was always interested in Russian culture and Russian literature even before he came.

"I'd read Dostoyevsky, Tolstoy, Chekhov, I read many novels and I was really astonished, and I really liked them, I hope that I can read their novels in Russian."

Now, Dheya is studying at ITMO University, at the Department of Computer System Design and Security. The students that came from Yemen are among the brightest in the country, but it’s not easy for them, with the language barriers, in their first few months of studying their courses strictly in Russian, they are just coping to understand the lectures, and getting their head around the education system.

Dheya comments that "mankind can adapt to anything under any circumstances", when he’s talking about what it’s like to live in the war, 70% of the capital are using solar energy, and you can find cold and frozen water in shops, you can always find a place to charge your phone, even though there’s no electricity. People find ways to deal with life under difficult circumstances. So he’s confronting the language barriers and the new culture with the same conviction. When in class he doesn’t catch the words the lecturer says, he uses his creativity to just write the words that he hears or take a picture of what his classmate writes. Eventually, he just takes the theme of the lesson and researches it online and reads about it in English or Arabic. He’s grateful for his Russian classmates, who have been helpful and friendly and try to help as much as they can. He says it’s not easy but you must persevere. One teacher didn’t accept his homework 7 times, and kept asking him to bring it back. When he eventually produced an excellent work, she didn’t believe that he did it himself, and asked him to show her again how he did it to prove it. But in all these struggles Dheya is always positive,

"I'm grateful to her, she made me understand a subject that I never thought I’d understand."

All in all, the cultural differences between Yemen and Russia are not slight. In Arab cultures, food is a part of the culture, sharing food, eating food together is a joyful experience. In Russia he says, "People here just eat to stay alive, we don’t do the same in our countries, we eat for eating itself, we are cooking nice food so we can enjoy it. Here they eat boiled macaroni, boiled rice cooked in packets, it’s torture." While he says he has nice Russian flatmates who enjoy eating the food he prepares, he doesn’t always feel the same way about all the food that they prepare for him, "most of it ends up in the garbage," he says. "Although "blini', I really like." For those who don’t know what Russian blini is, it’s something like French crepes, and can be filled with all kinds of delicious fillings. Dheya still has a few more years to go to complete his degree, and there’s no doubt his Russian will improve and his experience will get easier. He wants to pursue a Masters or PhD in nanotechnology somewhere in Europe or Canada. When all is said and done, he wants to go back to Yemen and says "I am going to serve my people who have given him an opportunity to learn from the experiences of the modern world". While studying, he is trying to make efforts to give back to the community. He has formed a small team in St. Petersburg focused on sustainable development, with the World Merit Organization. "It's nice to give, because life is giving us a lot of things, so we have to give," he says. After his studies are over, Dheya plans a world trip where he can tackle sustainable development in all parts of the world.

"Sometimes I feel like I’m achieving things, and I’m doing nothing to achieve them," says Dheya, "and I have to do something to repay, so this is the way I try to repay, to help."

With so much hope and ambition for the future, we’re sure we will hear great things from Dheya.