Education, communication, traditions, living conditions, food and weather - all of those change dramatically for international students who come to study in Russia. To adapt to the new environment, they can rely on specialists from the International Students Learning and Support Center; yet, having the right attitude is important as well, believe the exchange students from Europe and Brazil who came to ITMO for the IT and Business Innovations in Russia course. In an interview with our newsportal, they shared their experience of studying at ITMO University. 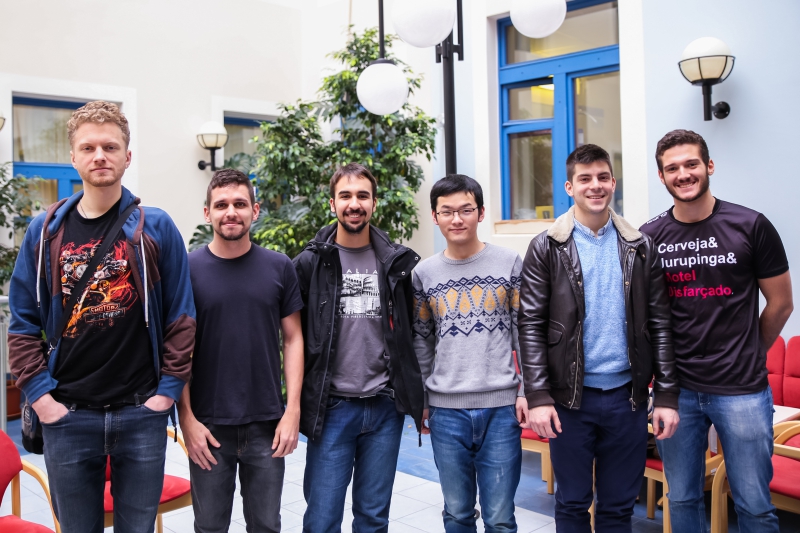 Tell us about the course you came to ITMO for.

Guilherme Baldo Carlos, Federal University of Espírito Santo, Brazil: The program is divided into two parts: one on business and one on IT. Generally, we have the business module in the morning and the IT module after lunch. For the business part, we get skills in the field of managing technological inventions, digital marketing, and entrepreneurship. These skills are very useful for managing a technological startup and bringing it out to the market, which is especially important for me, as at my home university I got only technical sciences and couldn't learn much on how to manage a business. As for IT, we have courses on Big Data, virtual reality, machine learning and the like.

What strengths and weaknesses can you mark out in what has to do with the educational process?

Charles-Henri Poirot, TélécomParisTech, France: At first, I found lectures in Russia unusual, as the lecturers do not explain new material in detail. They share about the topic's general aspects, and then ask you to do some project so that you have to find additional materials yourself. Yet, I like that, as you learn to work with information independently, search for the data you need. In France, at my home university, the flow of the educational process much depends on the subject and the lecturer. We have more lectures where everything is explained in detail. The question is - what is the lecturer's role in one case or the other? Is he above all a researcher or an advisor to students?

Guilherme: Our course's students all have different levels of training. So, it must be hard for the lecturers to tend to everybody's needs, as some don't need particular explanations, while for others they are crucial.

Why did you choose ITMO and not some other university?

Manuel Gasteiger, University of Innsbruck, Austria: I wanted to try something new; going to Germany or Italy wouldn't be that. So, I asked my professors, which universities in Russia we collaborate with, and where can I go for an exchange semester. I had a choice between three universities in Moscow and St. Petersburg. I chose ITMO, as it had the most informative and comprehensible website.

Charles-Henri: I had several options, programs that offer the same courses as ITMO in different universities, including ones in Europe. Yet, I really wanted to go to Russia, particularly St. Petersburg, and try a not-so-famous university in the field of Computer Science. Though ITMO is quite famous, the exchange program with our university was a new one. Surely, that was a risk on my part, but that was also a personal challenge as well.

Guilherme: I first heard of ITMO when guest lecturers from it came to my home university. And a year ago, my friend went there on an exchange program; at that time, I started thinking of doing the same. I read about it on the Internet and understood that it's quite advanced in the field I need, and renowned professors work there - so I made up my mind.

Was it hard to prepare for coming here?

Charles-Henri: I had to do my best. For example, when I was getting ready to leave, I sent a request to my network operator to get mobile Internet in Russia. Yet, when I arrived to Pulkovo, the service didn't work, and I didn't know how to get to the dorms. I tried asking the bus driver, but nobody spoke English. In the end, I got where I needed, but with great difficulty. I should have checked the bus route while still at the airport. Also, there were issues with documents, as Russia is not part of the European Union. But that is ok. I would have had to go through the same procedures had I decided to go to the USA.

Guilherme: For me, everything went smoothly. I had to prepare documents, but that would be the same for going to any country. What's more, ITMO's staff that's responsible for helping international students swiftly answered all my questions and helped me with advice.

What was most difficult about student life in Russia, and what came as a pleasant surprise?

Charles-Henri: At first, I was astonished by the dorms, yet I'm used to them now. The living conditions are minimalistic, but that depends on what one needs. Also, I really miss cheese. Yet, I learned that St. Petersburg is an incredibly beautiful city, much like Paris. And there are lots of museums. I can't even imagine how one can visit them all.

Manuel: Yes, if you're accustomed to living in comfort, I advise renting a flat. Yet, I was pleasantly surprised that even for foreign students, the entrance to most museums is free.

Guilherme: I didn't mind the dorms. For me, they were quite comfortable. What was difficult is that few people speak English. And at the same time, sometimes people who you don't expect to speak English do - for instance, some passer-by on the street. I knew the basics of Russian, but that was not enough. I train my skills at the Russian course we all have to attend here, and that's great, having such an opportunity. I learned that Russian language is very beautiful, but really difficult. The grammar is really difficult. Also, I try to learn Russian culture in the museums, Russian traditions. When I only arrived, I thought: there's so little sun; yet, I really liked the winter here. As for studying at ITMO University, it’s great that you can always learn the schedule, your lecturer's contacts and other useful information on the website. Our advisor, Anna, really helped us out, without her we would've been at a total loss.

Did you manage to make any Russian friends?

Charles-Henri: Making friends in Russia is not easy. Yet, this is not about anything being wrong with the locals, or us. It's just how the situation unfolds. No one speaks my language here, and few Russians know English like they do in Europe. We know several Russians, but I can't say we're friends. All in all, I think that those who do not like change won't get anything from coming here. Yet, if one wants to try something new, coming here is a good idea, as it's a completely different city, with different people.