Why and how to calculate heat losses in apartment complexes, how thermal shield materials are created, and how to optimize energy consumption: these are the hot topics the seven students of Al-Farabi Kazakh National University worked on during their exchange at ITMO. ITMO.NEWS met the young researchers to talk about what surprised them in the Russian education system, what projects they managed to accomplish here and why heat power engineering is a promising field to explore for Russia and their home country of Kazakhstan. 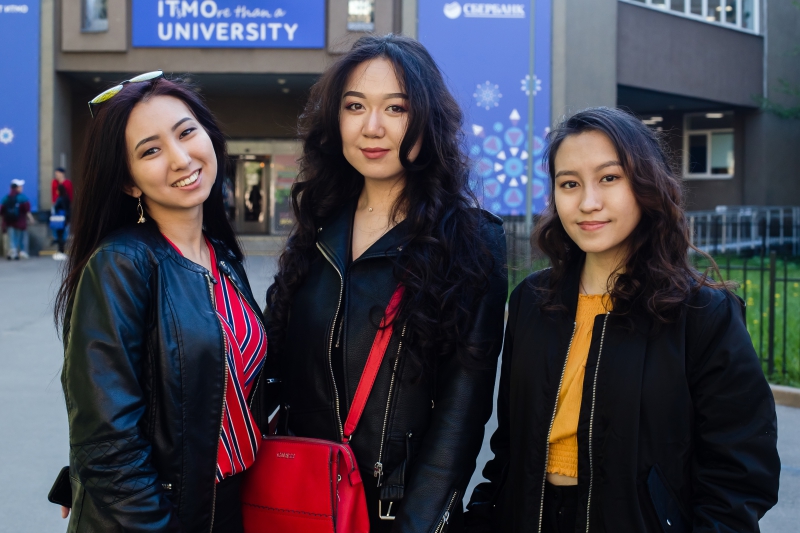 One of KazNU’s international partners, ITMO University welcomed seven of its students who came to pursue an academic exchange during this spring semester: Ayazhan Azhgalieva, Zarina Ilyasova, Ulmeken Kenesbaeva, Adil Tokumtaev, Arman Utegenov, Albina Mukhambetova and Laura Iskakova, all majoring in technical physics. According to Zarina Ilyasova, their decision was influenced by the positive feedback from other KazNU students that did an exchange at ITMO.

“Lots of KazNU students had done an exchange at ITMO University before us, and, of course, they talked about their experiences, about how much new knowledge they received and how many new people they met. They all spoke about how this broadened their horizons, and they strongly advised us to go. On the other hand, we also have a lot of ITMO students coming to KazNU on a regular basis, and for them, this is also a great opportunity to see how things are at our university,” shares Zarina.

As of now, Ayazhan, Zarina and Ulmeken are third-year students at the Faculty of Physics and Technology of Al-Farabi Kazakh National University, pursuing a program in technical and thermal physics. Being at the stage that they are, the students have the opportunity of choosing their own educational trajectory; all of them are interested in heat power engineering. The subjects that they study at ITMO include Process Automation Systems, Experimental Research Methods, Diagnostics of Energy-Physical Processes, and Cooling Systems of Devices. They are also enrolled in a range of distance learning courses.

“These subjects are the closest to what we would be studying at KazNU as third-year students of the educational trajectory that we opted for. But because of a slight difference between ITMO’s and KazNU’s curricula, here we study alongside people who are in their fourth year. This was difficult at first, because we didn’t examine some notions we deal with now as in-depth as our work here requires. But ITMO students and lecturers were more than happy to help, offering extra classes and explaining the things we didn’t understand,” says Zarina.

Back home, the students also do their studies in English, so another learning curve that they had to grapple with upon coming to St. Petersburg was getting accustomed to a different language, says Ayazhan. But she adds that ITMO provided them with both theoretical and applied training. For one, they accomplished a wide range of research tasks at the university’s chemistry labs and honed their skills using different IT tools.

“Although we enjoyed all of our studies, what we found the most useful was the subject “Process Automation Systems”. Using specialized software, we learned to create different components for relevant equipment. We also did a lot of lab work, including that in the field of chemistry, and this gave us a lot of valuable experience,” share the students.

As part of their studies, the young researchers worked on developing their own projects under the guidance of their ITMO University mentors. Zarina Ilyasova’s assignment had to do with calculating heat losses in apartments situated in large residential buildings. In her work, she researched existing heating tariffs to identify how much extra money users are charged because of heat losses, and explored the ways of making the whole system more effective. She plans to continue this study after she returns from her exchange at ITMO.

“The results the project helped us understand that this isn’t a very well-researched topic and there still are a lot of aspects we need to explore. My scientific advisor provided me with a ton of suggestions for further reading and recommended me to carry on with this research. When I go back home to Kazakhstan, I plan to develop this topic together with my scientific advisors at the faculty,” says Ulmeken.

In her turn, Ayazhan Azhgalieva worked on the topic of thermal shield materials. These materials are also used in a wide range of fields. In aircraft engineering, for example, their application is as passive protection of aircraft surfaces and other elements from aerodynamic heating or harmful impact of hot gas streams. These materials are also seen as very promising in the construction industry and even in clothes manufacturing.

The students admit that there were a couple of things in the Russian education process that they found surprising. For one, they never encountered the practice of diving weeks into even and odd-numbered. They also had to get used to classes that last for an hour and a half, compared to the 50-minute lectures they have at home. Russian exams, too, proved to be different from those in Kazakhstan, where all examinations are held in the written form. ITMO University also surprised them with having lots of international students, notes Ayazhan.

In the future, the students want to become engineers engaged in solving applied tasks. They believe that heat power engineering is a promising field that is actively developing both in Russia and in Kazakhstan.

“Heat power engineers work to find new, alternative methods of using energy, optimize thermal processes, develop new models aimed at introducing new technologies in national energy systems. With the number of resources decreasing year in year out, we have to come up with new ways of consuming and generating energy, notably those utilizing alternative energy sources. This is eco-friendly, convenient, and cost-effective. And right now, Kazakhstan has a huge potential to develop in this field,” note Zarina and Ulmeken.

Ayazhan adds that a good technical background allows one to go beyond one field of knowledge and one career path. Even within the bounds of heat power engineering, you can explore a wide spectrum of tasks from modeling the equipment to administrative work.