From Mexico to Vladimir and later to St. Petersburg, Rigel tells his history to ITMO.NEWS. He’s in his first year of studies at the High Molecular Weight Compound PhD program and is also a participant of the ITMO.Mentors initiative. 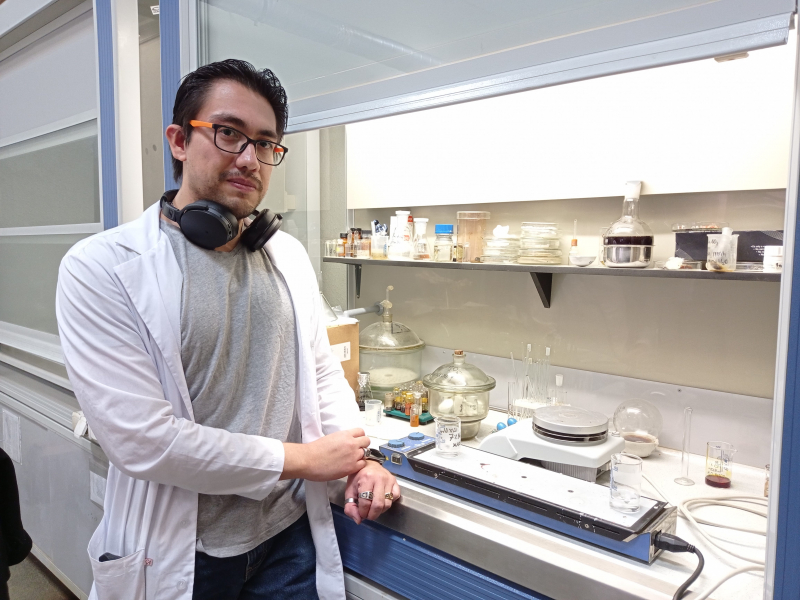 I got my Bachelor’s in Mechatronics Systems at the Polytechnic University of Puebla in Mexico. Right after I finished, I knew that I wanted to continue my studies, so I decided to do my Master’s degree in Russia, mainly because it’s a country full of beauty in any season of the year. At the age of 23, I traveled to Vladimir, where I first took a year of Russian language and then my Master’s program at the Vladimir State University, where I got my Master’s in Mechatronics and Robotics Systems. I lived in Vladimir for three years. After I finished my studies I went back to Mexico for almost a year with a new goal in mind; meanwhile, I was looking forward to my PhD. In the beginning, I wanted to do it in Japan, but I found the possibility to apply for a scholarship in Russia at ITMO University and I took it. In December 2019, I arrived here to start my PhD program.

Why did you decide to do your PhD at ITMO University?

After living a couple of years in Russia, you start to get familiar with some names such as MGU and ITMO. It is well known that ITMO is one of the best universities in Russia. I decided that I wanted to study at this university because they offered the program and the facilities needed for the development of my project, which nowadays is not very popular and not many universities support this kind of project. When I applied for the scholarship and saw that ITMO university was on the list of universities to apply to, I selected it as my first option without hesitation.

Can you describe your current research topic?

My research is the development of novel material that can be implemented in bionics. I’m focusing on the development of a material that can mimic the motion of a biological muscle; in other words, an artificial muscle, or soft actuator, based on biopolymers. These soft actuators aim to solve all the disadvantages of conventional actuators like motors and pistons, which have a high weight, high cost, huge volume, and low robustness.

How did you get to the idea of creating artificial muscles?

Back in the last semester of my Master’s, I decided to build a prosthetic arm with the goals of improving the mechanical design, control algorithms and most importantly, reducing cost. While I was working on my project I realized that in small robotics systems there’s a major problem with actuators that are often used as servo motors, step motors, pistons and others. The problem with these actuators is that they are bulky, heavy, not very robust, expensive, and not very aesthetic. Because of these characteristics, you end up sacrificing a lot of your design in order to use them. At that moment I thought that in the 21st century, there must be some other kinds of actuators other than motors and pistons, but there aren't. Then I realized that our actuator technology is still very primitive. Once we implement this material in a robotic system we will be able to build more anatomically correct designs by biomimicking the muscular system of living beings, and a new era in robotics will start, putting us one step closer to the day that cyborgs will walk around us.

What activities are you involved in at the university?

I am enrolled as a mentor in the ITMO.Mentors project. My duties as a mentor are mainly to assist with activities such as practical classes, lab assignments, and lectures and help new international students who don’t speak Russian adapt to life at the university.

How do you like Russia? What were your first impressions?

My first time in Russia was five years ago, not that long ago, when I lived in Vladimir. One of my biggest impressions was the Russian beauty, and also how fast Russians speak. Recalling my first day in Russia, I had to take a train from Moscow to Vladimir and that was a wonderful experience. I was amazed by how efficient trains are. Russia is a country full of beautiful places to admire, and when talking about St. Petersburg, it is well known that it is one of the most popular cities around the world. Having the opportunity to live in such a historic and gorgeous city is a once-in-a-lifetime experience. It is true that nothing in this world is perfect. One of the challenges that I faced was culture shock. Some Russians have a rough temperament and very little patience, which doesn't help very much when it's your first time here. But everything is better once you get used to it and learn the language. Some days, it is difficult for me to realize that I have the opportunity to study in one of the most beautiful cities around the world and in one of the most highly-qualified universities in Russia.

What can you tell us about university life as an international student?

From my point of view, life as an international student is not easy, but it is a great experience. It may be difficult to adapt to a new culture, and on some days you might feel like you don’t belong here. But the experience of being an international student is amazing, more so if you live in the university dorms because you get to know a lot of people from different cultures. It helps to open your mind to ideas and concepts about what life is like around the globe.

What do you think makes a good scientist? How are you considering implementing your research?

I believe a good scientist is one who hasn't forgotten how to be a kid. Kids are always asking how the world works and they’re always amazed even by the smallest things. It makes them the best scientists in the world because what they aim for is to discover the truth of the world without caring if what they asked is silly or not. At the end of the day, the purpose of science is to discover and to understand how this crazy universe works by asking silly questions and letting our minds get amazed at the smallest and silliest things. “There are no dumb questions, just dumb people who never ask”.

Once the artificial muscles are ready, the next step will be to implement them in robotics. The first attempt will be the development of a prosthetic arm which will be actuated by the motion of artificial muscles or soft actuators; the goal here is to create an arm that can mimic at least 80% of the anatomical structure of the human hand and forearm by improving the design, the motion, the weight, and the price.

What are your expectations and plans for the future?

My plans after finishing my PhD are to go back to Mexico and enroll in the navy, with the intention to work as a researcher with the Mexican Navy. Also one of my biggest dreams is to become a professor, so at the same time, I will look for a job as a lecturer.

Any advice for other international students who want to come to Russia and do a PhD here?

My advice is to get prepared to learn a difficult language and work with amazing people. Russia is not perfect, but neither are other countries. Keep in mind that you are going to be involved in a new culture, everything will be different, so just keep calm and drink vo… tea! and pursue your dreams! That is why you are here!