ITMO University, along with the Bushe bakery chain, released a collaborative pop-sci project called Schrödinger's Croissant. This is a limited-edition pastry with a secret filling and a QR code to a set of short clips by the university’s scientists that explain the concepts behind multiverse, teleportation, and other mysteries of the quantum world. ITMO.NEWS caught up with the project’s experts for some rapid fire questions about how they pulled it off and challenged them to explain some complex ideas in plain language. 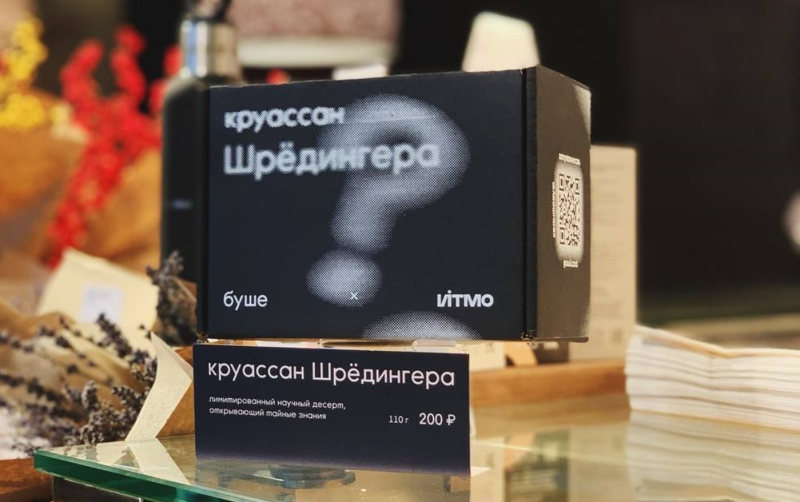 When we explain science with pastries, we don’t gain weight, so there’s no harm, only benefit –  after all, unconventional comparisons do wonders in pushing the boundaries of our imagination.

I was told about a fun project that could make science more accessible and I thought to myself: “Why not?” That’s the way it was but I tell everyone that it’s for the sake of science –  and croissants!

Making science simple or  having an imaginary conversation with a venzel (a signature pastry from Bushe – Ed.) – what seemed more complicated to you?

Clearly the latter. Here’s a behind-the-scenes secret: Venzel’s lines were read by an assistant director who was sitting just across from me. It was beyond amusing because I had to explain something to a person who’s supposed to be the yummiest pastry on the set. As you can imagine, I couldn’t do it from the first take.

I’m an expert in quantum dots. They are just like these tiny pasties that have different flavors depending on their size. The same is true for semiconductor dots: when we shrink a semiconductor down to the scale of nanometers, its physical properties alter and become dependent on its size.

an engineer at the Faculty of Physics

This is a fantastic idea! But we’ve got to watch ourselves, otherwise we’ll once end up explaining quantum physics through electrons.

Well, I had two options: keep working or become a star. And as you can see (with a pair of sunglasses on), I’m glowing.

It may be a bit hard to talk about science in simple terms but it’s even harder to look at a pastry you can’t eat.

Let’s take Newton and Einstein gravity. Say, your mom picks you up from the kindergarten and instead of heading right home to watch cartoons, she takes you to Bushe to buy some pastries. This is Newton gravity. From the bakery’s perspective, your mom forced you to go there – that’s why you’ve come. Now you’re a grown-up who understands the love for pastries, and all your routes home pass by the chain’s bakeries. This route may not be the most direct but it will definitely be the optimal one for you. It turns out that your route nevertheless changed because of the bakeries, though there was no mom in this scenario. That’s how Einstein gravity works.

Quantum physics is beautiful, pastries are beautiful, and both combined is always a thrill, if taken in good measure.

I love the idea of science popularization. Trying to get complex things explained is a challenge that benefits both the public and yourself.

It was way harder to imagine a pastry, and when I did, I got distracted and wanted to get to a coffee shop as soon as possible. Jokes aside, though, the explaining bit wasn’t easy.

the head of the Laboratory of Quantum Processes and Measurements

This is, no doubt, an excellent project, like any other pop-sci initiative, and it’s even better that we have a chance to explain quantum effects, which may feel counterintuitive, with vivid examples from everyday life. With this project, we can help more people learn about such phenomena and even encourage them to dive deeper into the topic.

This isn’t my first project at ITMO. I now know first-hand that collaborations bring amazing results, so I had no doubt that this one will be a success. As I already mentioned, science popularization activities are essential and valuable, especially today when science has advanced so much that it once again gives a sense of magic to ordinary people, which is not what should be happening.

Definitely the first. You can’t be a scientist if you don’t have a vivid imagination, so it was no trouble for me to imagine the situation. Whereas finding quality analogies for quantum effects isn’t a piece of cake. The thing is, most of them have no analogies in our world, so I had to be creative.

Quantum entanglement is when you have two identical black boxes with two croissants. You know for sure that they are different but you can’t say which box has which until you open one of them, and when you finally do it, you will learn both answers right away.

Embark on the trip to the world of quantum physics and pastries, together with ITMO experts and Venzel (voiced by Kuraj-Bambey) by purchasing a Schrödinger's Croissant at one of Bushe’s cafes (see the full list here) and scanning a QR code on the box.