If you practice music for 10,000 hours, you’ll become a professional musician, and your brain will change, bringing you lots of perks for dealing with challenges in other areas of life, say psychologists and neurobiologists. No, answer genetics, if a child doesn’t have an innate talent for music, there is no way you can make them practice for 10,000 hours. And if they have a talent, it doesn’t matter whether they want to do music or not; they will be able to solve problems with an ease similar to that of a musician, and it isn’t because they’ve practiced, but because they fundamentally have good genes. This was the topic of the recent Okhta Lab lecture by a science journalist Asya Kazantseva. 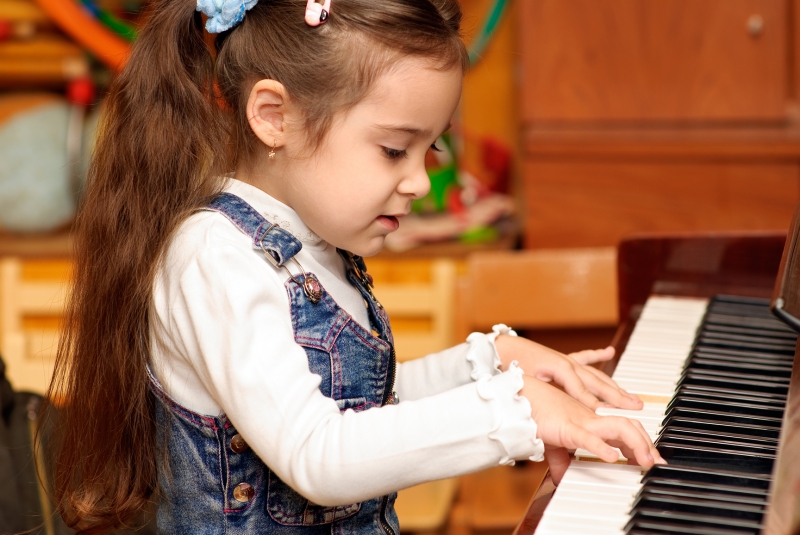 Psychology, neurobiology and genetics already know a lot about the brain’s less complex operations such as how the vision works. But it is the higher-level brain functions like listening to music, enjoying music, performing music, that prove a tougher nut to crack, as these activate many different parts and cortices of the brain with an odd distribution of functions, and this makes them very difficult to research. You can also only study the love for music through people, which creates limitations in terms of what a scientist, especially a geneticist or a molecular biologist, can do. Another problem is that music seems to be a simple topic, and one that always resonates with the public at large, so related research, whether it is not entirely scientific, can go viral and give rise to lots of myths which impacts how the field develops going forward.

Mozart effect is a theory which suggests that listening to classical music can make children smarter. It stems from a small research project with 36 student participants. They would come into a laboratory where, depending on a day, they were offered to listen to Mozart, a guided meditation, or just sit in silence for ten minutes. They were then asked to take a test that assessed their spatial intelligence. Published in a leading scientific journal, the results confirmed that listening to classical music helped students boost their test performance in the first ten minutes after the session. But the article omitted that the research only included 36 students, that they had only been tested on their spatial intelligence, and that the positive effect named only lasted for ten minutes. The mass media busted with a fit of endless instructions on how parents need to force their kids into listening to Mozart on a daily basis.

From this point on, the research recommending classical music as an intelligence-boosting tool has become to multiply. Meta-analyses (articles encompassing a host of different research findings) abound with comparisons between listening to Mozart and not listening to any music at all, which implies a range of various activities such as listening to audiobooks, reading, watching television, drawing, sitting in silence and others. But the reality is that music has but a little advantage before these activities, and some research couldn’t pinpoint this at all.

For instance, there’s a 1999 article that’s interesting because it studies how people react when placed under different conditions. One group of volunteers just relaxed in silence, another listened to Mozart. As with the original Mozart effect article, the study showed that the people who listened to Mozart showed better spatial testing results. But it also uncovered that reading a Stephen King short story had the same positive effect. The key to this finding could be that when people sit in silence or listen to something boring, the fatigue they feel causes them to underperform during the test. If offered to do something fun, however, they are ready to cooperate and take pleasure in answering test questions.

We’ve established that it doesn’t matter that much if you listen to music or not. But what will happen if you start practicing it regularly? On the one hand, there are heaps of research which suggests that people who practice music do better at school. Though the correlation does exist, it needs to be taken with a pinch of salt, which comes in the form of cargo cult.

First discovered in Melanesia, cargo cult is a belief system found in tribes coming into contact with more advanced cultures. When Western military bases started to appear in Melanesia after the WWII, Melanesian islanders began to interact with the staff, doing simple tasks and getting various goods in return. These were shipped by airplanes, and making tribe members believe that food and clothes were sent by gods from the sky. They also noticed that it was their neighbors that got all the presents, which stopped after the soldiers left the island. The islanders took it as a sign that the gods got angry with them for some reason, and decided that they needed to repeat what the Westerners did to mollify them. So they started making airplanes, control towers, headphones, and other items, built and weaved from the means they had at hand.

This is a perfect illustration of how the human brain works: our nervous system tends to notice coincidences between events, operating on the principle that if an event is followed by another, there is a link between them, and a causal one at that. This is the way that humans explore the world around them. The obvious issue here is that this link may not be causal; if two events happen simultaneously, it doesn’t necessarily mean that one led to another.

That applies to music. Research does suggest that children who practice music perform better at school. There is a ‘but’, however. The first problem is that this correlation is always weak. It shows that there is a link, but it doesn’t work in each separate case. Another issue with studies surrounded with a huge buzz, the ones suggesting that music is good for your brain included, is that they are prone to survivorship bias: it’s typical that the articles which say things we like and want to hear are the ones to get published, and people tend to overlook the more important information of those that didn’t make the cut.

Such correlation also doesn’t imply any causality. Maybe it is because they started to do music that a student suddenly experienced a boost in their school performance. Maybe a well-performing student was dealing with their homework too quickly and their parents decided to sign them up for music classes to fill in their free time. Maybe a kid just naturally has a good brain and good genes. Another possibility is that students who have a knack for music and good grades developed in families with a high socioeconomic status. Such status doesn’t only mean that the parents have time and means to invest in their children, but also that the children enjoy good health as their mother ate well during pregnancy and was getting high-quality medical service, among other factors.

According to some research, there is no correlation between music training and intelligence. That is to say that this interaction is based on other factors, which affect how much you enjoy your music lessons and your own performance. When talking about our abilities, we have to take into account both socioeconomic aspects and biological ones, that is, our genes, which influence the development of the auditory cortex, cerebellum, motor cortex, and so on. There are many things we still don’t know, but there is evidence indicating that if you start doing music it will somehow modify the structure of your brain (just like pretty much everything that you do).

People who do music professionally have something in their brain that distinguishes them from other people. These characteristics are statistically significant and have to do, first and foremost, with brain cortex thickness of various regions of the brain, such as the auditory cortex, motor cortex, frontal cortex, and corpus callosum, which connects the left and right cerebral hemispheres, enabling communication between them. However, scientists still haven’t figured out what is cause and what is effect here. Maybe some people can obtain thick auditory cortex simply by birth, not by musical exercise.

In this case, experimental research can be really helpful. For example, you can select some people who have never did music in their life, make an MRI of their brain, and then divide them into groups in accordance with whether they will do music in the future or not. Then you can scan them again and see if something’s changed. There are very few studies like this, but the one conducted in 2009 indicates that the brain doesn’t change if you don’t do music at all or do it very seldom. However, if you practice more often, your corpus callosum alters.

The fact that our brain changes after certain activities isn’t per se very surprising. Any kind of learning affects your brain on a physical level, by creating new neural pathways. These are special connections that enable a signal to be sent from one region of the nervous system to another. This phenomenon was discovered by Austrian-American neuroscientist Eric Kandel, for which he was awarded the Nobel Prize.

There is a molecule in our brain, a coincidence detector, which is responsible for forming neural pathways between the most often used neurons. So it’s pretty much predictable that if you practice some activities more often than others, the cortex in the regions responsible for them thickens.

However, even in this case, this correlation doesn’t equal causation. There is evidence that people who practice music have certain differences in their brain (the so-called “musician’s brain”). When examining such people’s brain, we can say that they owe these differences to music training. But what if it’s vice versa, and people with some inherent characteristics tend to do music more often and succeed in it?

The twin method allows researchers to investigate the genetic and environmental influences on individual differences in observed traits. There are two types of twins, identical (monozygotic) and fraternal (dizygotic). To form identical twins, one fertilized egg splits and develops two babies with exactly the same genetic information. This differs from fraternal twins, where two eggs are fertilized by two sperm cells and produce two children, who are genetically no more alike than individual siblings born at different times.

In regard to music, if you take two big groups of identical and fraternal twins and examine their musical abilities, you’ll see that identical twins show much more similar results: if one of the two has an ear for music, it’s very probable that the other one does too.

What is most extraordinary is that this effect is present even if one of the twins does music professionally, while the other one doesn’t. According to the tests, there is no difference between their inherent musical abilities, which means that this trait can be hereditary.

In a nutshell, doing music is great as it can improve your performance in other areas of life. But if you have a natural ability for music, it doesn’t matter whether you decide to pursue it or not. You already have good genes that make your brain work better.