Throughout last week, ITMO hosted the events of the “I am a Professional” competition’s Winter School. 180 students from 43 Russian regions came to this educational program that was organized by ITMO in collaboration with Sberbank. On its first day, Grigory Bakunov, director of technology distribution at Yandex, gave a lecture on trends that will affect business and technologies in the near future. 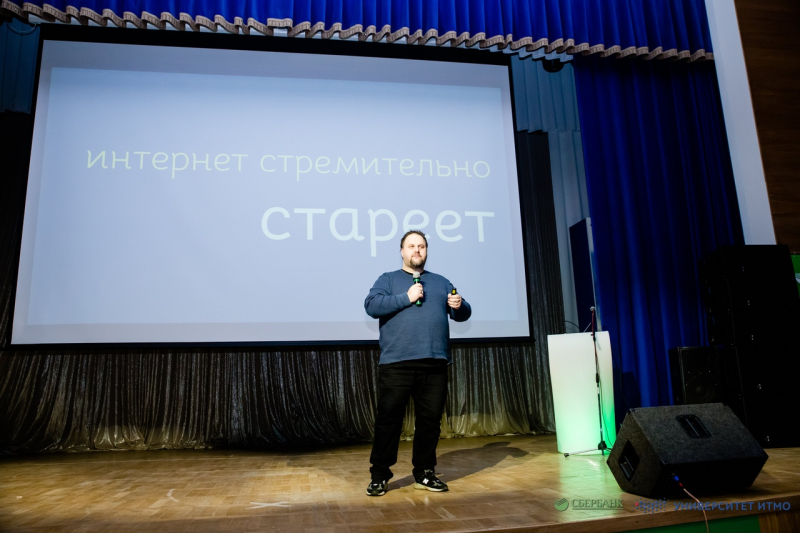 I do my best

Grigory Bakunov says that his work primarily has to do with the testing and introduction of advanced technologies in business.

““Director of technology distribution” may sound strange, but here’s what I actually do: once in a few years I take fresh projects, topics, research and turn them into self-contained  technologies and businesses. Then I spend a couple of years supporting this product, develop it with the team, and then let it continue on its own and take on a new technology,” explains Grigory Bakunov.

Among his latest projects are the voice assistant Alisa and Yandex.Health.

According to Grigory, his job has to do with both the introduction of technologies and entrepreneurship, and can be described with a simple expression: “I do my best”. During the lecture for the Winter School’s participants, he shared his observations of the dynamics in the world of IT products and modern technologies that will affect the future of business and our lives as a whole.

Aging of the Internet

The first and main idea that was brought up by Grigory Bakunov was “the Internet is aging fast”. Statistics show that by 2023, the average age of an Internet user will be 31. The main reason behind this is that more and more people of the older generation embrace gadgets and Internet technologies.

“Some ten years back, this all seemed impossible. I couldn’t even imagine that my mother would be actively using the Internet. Let’s face it, you also thought this way when you saw how your grannies and grandads timidly approached a PC and tried to install something while asking you to explain them every step. Nowadays, everything is changing. I’ve recently visited my mother and saw that she was in a Skype conference call with three other people. And this means that she’s learned about such a feature (which is paid, by the way), and learned how to pay for it, invite other people and make a call. So you see, the involvement of the older generation with the Internet will continue to grow, and business will definitely react to this dynamic; in fact, it already has.” comments Grigory.

What conclusion are we to make from this trend? We’ll need to re-work websites. The lecturer called back to the webpages of 2005-2007 with their small beautiful fonts and compared them with the modern ones with bigger fonts, sharper contrast between the text and the background, and less text in general. According to Grigory, this happens because the older a user is, the worse their eyesight and health in general. If 20 years back, the average age of an active Internet user was between 22 and 25, now they are over 30, and this means they see worse, get tired quicker and have sleep and nutrition issues.

Voice assistants are part of another trend that has a lot to do with the “aging” of the Internet. According to statistics, it is the children younger than 12 and adults older than 40 who actively use voice messages; users between 27-29 use them a bit less and users between 20-24 almost never use this function.

Still, despite the fact that this technology has already made it into our lives, it is becoming an important element of business.

“Voice purchases are a trend that’s currently growing. Let’s take Amazon’s Alexa as an example. It is very easy to ask it to make the purchase you need: “Alexa, buy batteries”. By the way, research shows that this is the way most users make their query, without stating the brand or the amount. So Amazon has all the opportunities it needs to send you the batteries that it can profit from. If these will be Chinese batteries, the company will get a margin of 100%, and if they’ll be its own product, then all 400%,” explains Grigory Bakunov.

Here’s a great example illustrating the effect of this trend on business: in 2017, IKEA was the top seller of batteries; in 2018, it shared this position with Amazon, and in 2019 Amazon became the top seller of batteries in the USA. And we’ll be observing such changes more and more often, as the older the user, the less time they have for purchases, and the more comfortable they are with using voice assistants.

Yet another trend that stems from the aging of Internet users has to do with healthcare. Still, it’s worth mentioning that as opposed to the last five years, when people counted calories and steps, in the nearest future, digital healthcare will have to do healthy nutrition and sleep timing.

“Why does one trend disappear and these two come to replace it? Because the user has aged and understood that sport is no longer a solution, so the only chance they have is healthy nutrition. The probability of success here is low, but still better than with exercise. As for sleep, I regularly ask at lectures: “Who got enough sleep today?”, and the older the group is, the less hands I see. People work a lot and have nutrition problems, so they have sleep issues, and try to solve them, as this seems to them a panacea from health problems and weariness,” says Grigory.

He added that he has as many as three devices that track the user’s quality of sleep and give recommendations based on this data. Because of weariness, working overtime and perpetual contact with displays the sleep patterns get interrupted and can no longer be restored the natural way, so the trend of using technology to control this aspect of our lives will definitely be around for several years on.

Some facts about the future

At the end of the lecture, Georgy Bakunov shared a short list of things that will also become trends, but it’s still not clear what will come of that.

Merging of business models is the future. All major inventions of the future will be made at the interface of two technologies. It’s already obvious that if you have two projects that pay off, you should look to create a third business at their interface. This should bring you even more profit in the long run. For example, Yandex.Taxi and the company’s drones may soon become an example of such an effective collaboration when one business takes another’s functions and vice versa.

Advanced technologies have become more accessible. Instances when modern services and technologies make their way into the lives of common people happen once every 15 years. In the early 2000s, this happened with Big Data, and now the same is happening with AI. So any business can now apply a technology that at first seems extremely complex.

More than a half of today’s professions will die out within 30 years. According to a discouraging prognosis, humanity will continue to forego the idea of “one life, one profession”. And if before, this could mean switching to some adjacent field, in the future, this can mean changing one’s field completely. What does this trend speak of? That the soft skill that’s becoming the most important is the ability to learn and acquire new knowledge fast.

““Half of the time that you think you’re thinking you’re really listening” – this quote means that half of the thoughts that you deem yours are actually something you’ve heard. What I’d like to wish you in this rapidly changing life is to first listen to yourselves. As a specialist in technology, I’d add: from those who teach you, get knowledge and not guidelines to follow. Monitor relevant trends and make conclusions of your own,” summarizes the expert.