My list of expectations for Kazan, the capital of the Republic of Tatarstan, was long. But, as usual, the real deal was much more complex and captivating. Here're my impressions from a trip in early June to help you plan your adventure or just learn more about Russia. 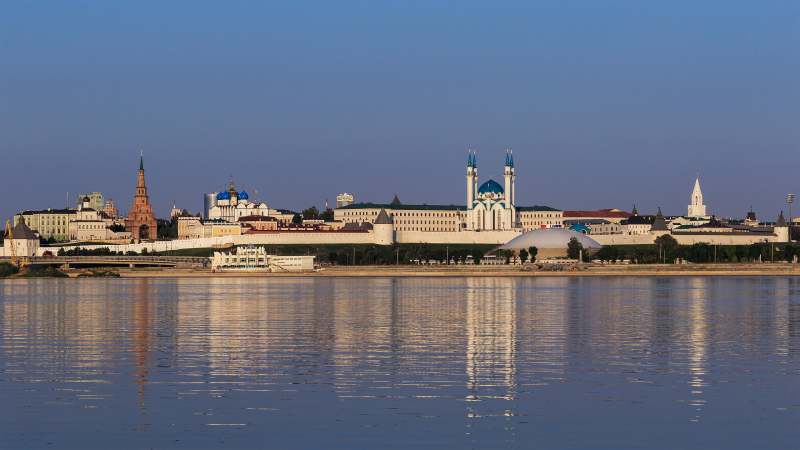 The Kazan Kremlin. From left to right spot Söyembikä Tower, the Cathedral of the Annunciation, and the Kul Sharif Mosque. Credit: A.Savin (Wikimedia Commons; WikiPhotoSpace) commons.wikimedia.org

If you are like me and you are travelling by plane, you’re probably comfortably getting to Pulkovo airport on the trusty 39 bus that catches you almost as soon as you step out of Moskovskaya metro station. Don’t expect to be greeted with the same courtesy in Kazan. Well, there is courtesy alright, but just not the exact same kind: don't waste your time waiting for the bus – the PAZ that comes is truly not worth it. Rather, go straight to the adjacent railway station and catch a smooth, quick ride to the main railway station of the city. Some 30 mins on foot from there – and you are in the city center (and at the price of your usual suburban train ride, with a 50% student discount! Nothing like the aeroexpress luxuries we're used to – thanks, Stockholm).

As for the buses within the city, I can't rate them as anything but pleasant. Swift, abundant, with a discount if you pay by card – they are simply perfect. The metro, on the other hand, seemed a little abandoned and weirdly empty, but still offering all the usual services – again, card payments are accepted.

Discovering the city on foot

The first thing that hits me every time I go to almost any Russian city that’s not St. Pete is how curvy the landscape is! You tend to forget you might need to climb a hill to get somewhere – seeing as it's virtually impossible in the flatlands of our Northern capital.

Jokes aside, though, the first thing to see in the city is, naturally, its white-stoned Kremlin, built in the 16th century by Pskovian architects and thus representative of the distinct crisp style characteristic of that region. Guarded by the city’s very own dragon-like symbol, Zilant, the snow-white Kremlin with its multicolored insides does look like something from a fairytale or at least a legend – a more suitable term once you learn a little of its history (which we’ll come to shortly). You can approach it from the south of the city by following Bauman St. (for reference, I would compare it to Nevsky Prospect) or admire it from the other shore of Kazanka River, which it overlooks. By the way, this across-the-river trip is definitely worth it, for right opposite the Kremlin there is a peculiarly-shaped marriage registry building surrounded by four mythical creatures.

Inside the Kremlin, the Kul Sharif Mosque stands alongside the Cathedral of the Annunciation – perhaps, not something typically seen in the Kremlins of other Russian cities. Though the new Kul Sharif was restored in 2005, its original predecessor dates back to the times before the city became part of the then-expanding Russian Empire (technically, not even an empire yet). The original building is believed to have been a representative of the Volga-Bulgar style and was named after a prominent scholar who died defending the city in 1552.

Behind the mosque and a little closer to the river bank stands the Söyembikä Tower, which also dates back to 1552, when Ivan the Terrible captured the city. The tower is named after a beloved Kazan queen and one of the popular legends has it that when the city was captured, Söyembikä was taken prisoner by Ivan the Terrible and was supposed to marry him. She agreed, but on one condition – he had to build her a tower in seven days. Her wish was fulfilled and within a week a seven-tiered tower was complete. The queen then threw herself from the last tier, not wishing to die a prisoner. Though historians still argue on the exact construction date of the tower, the figure of Söyembikä is still prominent even in today’s Kazan, with her name being a title of a popular magazine for women.

Passing the tower, you’ll eventually get to the Kremlin Embankment, which somehow resembles every southern Russian city I’ve visited in the vacation spirit it manages to create. Though it is pleasant to walk through and does offer a view on the other, more industrial and modern, bank of the river, my heart was won over by another embankment – this time that of Lake Nizhny Kaban. There are actually three major lakes in the city, connected in a single system and now undergoing beautification in that their embankments are turned into modern public places, while also, according to the info plates all around, doing something good for the environment by preserving rare plant species. The new space is completed on just one of the lakes now and it is definitely worth a visit. It’s exceptionally pleasant to sit by the water with a view of the original-looking musical theater and a floating stage for local performers.

Finally, another open-air space I would like to mention is the Chyornoe Ozero (or Black Lake) park, not that far from the Kremlin. It is rather small but pleasantly welcoming and cosy, with a special surprise for all lovers of acoustic wonders. The Lovers’ Arc at the entrance of the park is built in such a way that two people standing at each of its walls can hear each other’s whispers – for that I cannot vouch, as I didn’t hear my companion speaking, but the sounds created were still incredible!

Out of the three museums I visited, each one felt equally unique. First came the Natural History Museum of Tatarstan, located inside the Kremlin, which tells its visitors all about the local terrain changes, natural resources, and paleontological discoveries by first painting a picture of our universe (you could even calculate your weight on stars and other planets). Then was the National Museum of the Republic of Tatarstan, where I had a glimpse at the other side of Russian history. And it might just be my postcolonialist eyes skewing the perspective, but I had a distinct feeling we studied Kazan’s history from a slightly different viewpoint when I was at school. It was fascinating to learn more about the city and its culture pre-Ivan the Terrible. Finally, the Contemporary Art Gallery of the State Museum of Fine Arts of the Republic of Tatarstan boasts a Malevich and a Rodchenko as well as a number of paintings by other prominent members of the Russian avant-garde and a major exhibition of one of the local painters.

If you also treat St. Pete’s Podpisnye Izdaniya as your personal little shrine (or even Hogwarts), then Smena is definitely a space you’ll love. It’s a contemporary public space with a book and a record store, as well as a coffee shop on the first floor – but also stores with Russian designer clothes as well as an exhibition space. It’s a great spot to visit if you want to feel like a local or meet fellow book lovers to start your own cross-regional book club.

Let’s be honest, no cultural experience is complete without the food – and any foodie would love it in Kazan! I was blown away by the delicious vegan qistibi (roasted flatbread) with a hummus-like sauce of sunflower seeds and steamed veggies at the local Tybatay street food chain (meaty options were also available). Upon a local friend’s recommendation, I also purchased my chak-chak (a local dessert of deep-fried dough soaked in honey) exclusively at Bahetle (which is a Tatar word for happy) – and it was never ever a disappointment. Also, tea with an abundance of herbs seemed to be kind of a specialty, and I was surprised to learn that the plants I admired only visually could taste so good!

If you are a coffee addict or just like to pretend that you can taste the difference between blends even in a cappuccino (like me), you will also find something to please you. The tastiest cup, in my opinion, was at Botanika (which actually doesn’t go very far style- or price-wise from the coffeeshops found in St. Petersburg), but the best atmosphere was definitely at the local CoffeeBean (as you might remember, the coffee shop chain that gave birth to raf coffee, a Russian specialty).

Conclusion: being a tourist?

Visiting various Russian cities as a Russian, you do feel like a stranger, of course, but usually only route-wise, a feeling that is gone once you’ve opened your Google Maps or spent a couple of days in the city. In Kazan, however, I couldn’t help but feel just a tiny bit out of place, as if it was obvious I was a tourist (which is not a bad thing necessarily, but not something you’d typically love to admit). Though the cultural differences weren’t noticeable and could’ve easily been a feature of my imagination preconditioned by “exotic” stereotypes, some part of my mind kept trying to place its finger on what doesn’t feel like “home.” I find it a curious feeling to experience without leaving the country – and might deduce from it that you should definitely visit Kazan if you want to understand more aspects of Russia than can be found in Moscow or St. Petersburg.

I would say that if you let it, Kazan, and possibly the Republic of Tatarstan as a whole, will offer you another perspective on Russia and add their own unique pieces to your picture of the country’s culture and history. I personally left the city inspired by everything I’ve learned about the region and its heroes previously unknown – and determined to come back to learn even more.

If you’d love to read up on Russia’s other capitals, head over here; and don’t forget to check out our Like a Russian series to learn more fun facts about Russian culture.