Rostov-on-Don: Sunshine, Spacious Streets, and History at Every Corner

A city of seemingly permanent summer, contrasts, friendly cats, bustling energy, and abundant history, Rostov-on-Don is bound to have a special place in your heart. 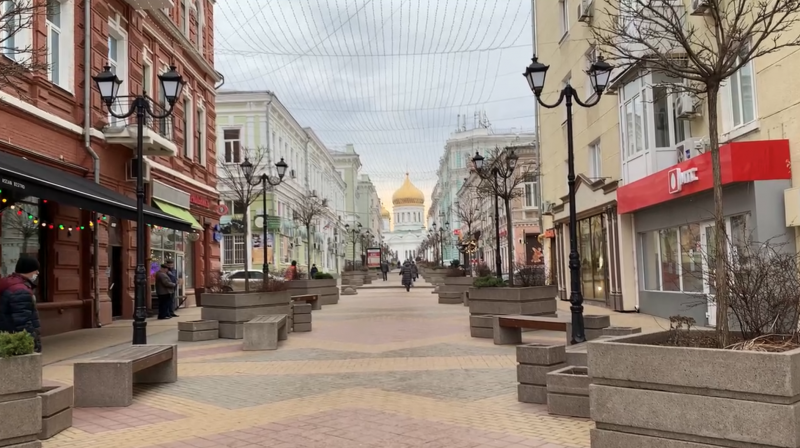 Before venturing out so far south from the windswept northern lands of St. Petersburg, I am ashamed to admit, I didn’t really know that much about Rostov-on-Don apart from, well, its obvious “on-Don”-ness (meaning that it’s located on the river Don) and the cossacks who used to populate the surrounding steppe and were a political force in the region in the 18th-19th centuries.

Turns out, the city was founded not long after St. Petersburg, in the mid-18th century. Over the centuries of its development, Rostov transformed from a customs house that it started with into a major trade and industrial center. Situated on a river and a sea and serving as a home to people of many different cultures, Rostov-on-Don unsurprisingly evolved into what is now often referred to as the southern capital of Russia (you will notice we tend to have many capitals). Even though the cityscape has seen many additions in recent decades, its rich history can still be traced as you walk down the long sunlit streets.

The feel of the city

In my story about Kazan, I already expressed my astonishment with the hill-abundant landscapes of most Russian cities in contrast to St. Pete, and in Rostov this feature, too, was most striking during my first visit. However, it couldn’t be outshone by the temperature shift: both times I came here, the weather was 10-15 degrees warmer than in St. Petersburg. It was incredible to step into full-blown spring with blooming lilacs from the cold and barren April in St. Pete.

Another thing you can’t help but notice is the rectangular plan of the city, with all streets crossing each other only at right angles and located in strict parallel to each other. It is this, perhaps, that made it colloquial for the locals to refer to places around the city as corners of two streets, for instance, “Let’s meet at Vorosh-Sadovaya” (meaning the intersection of Voroshilovsky Prospekt and Bolshaya Sadovaya Street). One of these unusually straight streets is the pedestrian Pushkinskaya, embellished with blossoming trees and local cafes down its length.

Finally, and this was something I only noticed during my last visit, the streets and especially courtyards of Rostov are home to many cats leisurely soaking in the sun or playfully walking in the shadows. This might not be a defining feature of the city, but somehow this cat-friendliness added to Rostov’s spirit of hospitality.

Exploring Rostov-on-Don and its surroundings

The city’s major prospects, as well as Bolshaya Sadovaya, and even Pushkinskaya definitely create the atmosphere of a modern bustling megapolis with all the associated attributes of tall buildings, noisy traffic, and lots of people. However, if you go to the start of Pushkinskaya Street, you will find yourself in an area with narrow streets and two-three-story buildings, all the hustle-and-bustle replaced with a rare peace and quiet. Stepping inside courtyards here is akin to traveling back in time – or perhaps even into another carefree, warm, and sunny reality.

This is not the only contrast to be seen on Rostovian streets – the abundance of architectural styles here is also quite startling. One minute you are admiring, for instance, the Ivan Zvorykin House and the next, there is the tractor-shaped Maxim Gorky Academic Drama Theater or the grand piano-resembling Rostov State Musical Theater. Apart from many other things, this variety could be a trace of the city’s diverse multicultural history.

Not unlike St. Petersburg, Rostov-on-Don is surrounded by many smaller historical cities and sites, each of which deserves a visit. For instance, the quiet Taganrog, with its views of the sea and the spirit of Russian playwright Anton Chekhov in its streets. Or stanitsa (village) Starocherkasskaya, once the capital of the Don Cossacks and home to many notable names in Russian history of the 17th-18th centuries. Now, the place houses a museum, as well as several historical landmarks, while also being almost a museum in itself, a place where time has stopped.

In the Rostov Oblast you will find an open-air reserve museum and an archaeological site, Tanais. In the third century BC the city of Tanais was founded here by Greek colonists and then, too, became an active trading hub thanks to its convenient location amidst rivers and the sea. Apart from the remains of buildings and courtyards of the ancient city, you can also look at all the archaeological findings in greater detail at the nearby museum. This turned out to be truly intriguing!

Finally, for all lovers of breathtaking sights, there is the lighthouse in Merzhanovo, a truly idyllic spot, where the precipice on the seashore offers a thrilling feeling of reaching the edge of the earth. Then, however, you see the steep way down to the beach that you follow to dreamily stare into the depth of the sea.

Grab a bite and a cup of coffee

Finally, you cannot leave Rostov-on-Don without supporting some of the flourishing local businesses. For instance, if you want something to eat on the go, stop by a Vkusnolyubov (which literally translates to “taste-loving” while sounding like a Russian last name), a place that has turned blinis into stuffed rolls for any liking: cheese, mushrooms, meat, and potatoes, the list can go on. Sadly, though, no vegan options. You also shouldn’t overlook Keks, a young but already flourishing chain of bakeries that conquers the hearts of locals and all visitors with its croissants, stuffed, again, to suit every taste. Moreover, there are whole shelves of other delicious desserts and even the coffee is supposed to be decent!

However, if you want to have that ideal cup, Rostov has its own roasting company, Family Roasters, where I had a delicious latte. And right on Pushkinskaya St. you will find the wonderfully dog-friendly coffee shop Setters, which offers a special size of cappuccino for long walks.

Both times I visited this city, I was lucky enough to be accompanied by a true Rostovian, and maybe that is why I have come to cherish this southern megapolis almost like another home. I hope you will feel that way too if you venture out to explore the Russian south.

You can learn about even more Russian cities and plan your future trips with our series Travel Russia.