How Indian Students Celebrate the Holidays of Dussehra and Diwali

India is known as the land of festivals and fairs. The month of October, in particular, is the most exciting time of the year. The air is filled with happiness, laughter, and the smell of delicious street food. The major festivals celebrated during this time are Navaratri/Dussehra/Durga Puja and Diwali. I caught up with a few international students from India at ITMO to find out how they plan to celebrate these holidays in St. Petersburg, and also share some of my own experiences. 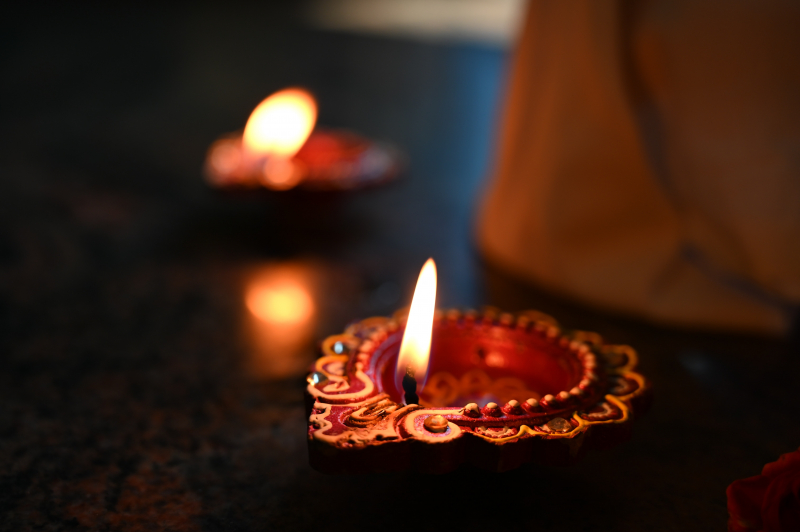 Diwali is one of the biggest festivals in India and is also known as the festival of lights. It is usually held in the months of October and November. In 2021, it will start on November 2 and go on till November 6. India is such a diverse country that the festival takes on different names and formats as one travels from North to South India. However, certain similarities can be found all across the country. The first day of Diwali is called Dhanteras in most parts of India.

“In the word Dhanteras, ‘Dhan’ stands for wealth,” explains Gautam Dhalgarkar, a second-year Master’s student of the Robotics and Artificial Intelligence program from Mumbai. “On this day, we worship Lakshmi, the goddess of wealth and prosperity. The next three days are the main days of Diwali in terms of celebration. The festival commemorates the day of Lord Rama’s return from exile according to the epic Ramayana. During this festival, we decorate our doorsteps with earthen lamps and flowers. Some people also draw beautiful rangolis on the floor. The fifth and the last day of the festival is celebrated as Bhai Dooj, this is the day to celebrate the bond between siblings. On this auspicious day, sisters perform puja for their brothers’ safety and well-being. The brothers in return give presents to their sisters as a token of love.”

In most parts of the country, Diwali is preceded by the festival of Dussehra, which fell on October 15 this year. It is the festival that signifies the victory of good over evil and celebrates women’s empowerment. Dussehra, also called Vijayadashami, marks the end of Navratri i.e. the nine auspicious nights. On this day, Indians burn effigies of Ravana, the evil ruler of Lanka according to the Ramayana, signifying the victory of good over evil.

Dussehra remains an important celebration for Takshama Bhatt, a second-year Master’s student of the Molecular Biology and Biotechnology program from Ahmedabad. “There is a mythological story behind the festival of Dussehra. It is said that on this day the goddess Amba defeated the demon named Mahisasur. On the occasion of Navratri, we worship Amba for nine nights. The festival is marked by the traditional folk dances of Gujarat called the Garba and Dandiya. Every street and public place is decorated with lights and chandeliers. Folk music fills the atmosphere with joy. During this festival, the shops and the streets are filled with people throughout the night. Irrespective of their age, people make the most of this annual event to meet one another, have gossip sessions, and indulge in fun activities. On the last day of Dussehra, we savor our traditional dishes called fafda and jalebi.”

Kirtan Patel, a second-year Master’s student of the Molecular Biology and Biotechnology program from Ahmedabad usually celebrates the festival by spending time with family and friends. He enjoys decorating the house with oil lamps and fairy lights. He also makes rangolis with powdered colors together with his siblings. His mom and sister make a variety of delicious sweets, including gulab jamun (a popular Indian dessert made by soaking balls of fried dough in spiced syrups).

“In Russia, unfortunately, the Indian community is very small,” Patel says. “But my wish is to celebrate Diwali with my Russian as well as other international friends. I want to enjoy bursting firecrackers. Sweets will definitely be on the menu. I am hoping to light some earthen lamps as well in my dormitory.”

I am from Kolkata, a beautiful city in the Eastern part of India. Here, Dussehra is celebrated by worshipping the goddess Durga. Therefore, this festival is also known as the Durga Puja. It is the biggest festival in this part of India. My Durga Puja usually begins almost a month prior to the actual festival. We go on a shopping spree, purchasing outfits for every member of the family. The entire city lights up with grand decorations. The pandals (temporary housing for the idols) are designed according to a particular theme. This year, the major attraction was a pandal that was made as a replica of the Burj Khalifa. The idol of Durga is worshipped along with her two sons and two daughters, namely Ganesha (the god of wisdom and wealth), Kartik (the god of war), Lakshmi (the goddess of wealth and prosperity), and Saraswati (the goddess of knowledge and art). These idols are usually extremely costly and sometimes take around a year to sculpt. On the last day of the festival, the idols are immersed in the holy river Ganges. A colorful procession accompanies Durga and her family, bidding them farewell in the hope of welcoming them again the next year.

In Kolkata, Diwali is celebrated differently. The goddess Kali, a ferocious incarnation of Durga, is worshipped on this day. The youth indulge in bursting firecrackers while the older generation decorates their houses with earthen lamps and candles. These festivals are an opportunity for all of us to retreat from our busy lives and get together with our families. Many people go on vacation to enjoy the festival in full.

Now that I am in Russia, I will definitely miss spending time with my family during these days of festivity. But I will also try to get involved in the celebrations organized by the Indian Embassy in Russia. I am also looking forward to celebrating Diwali here with my friends.

On behalf of ITMO University, I wish every student and staff member from India greetings for the festive season. As they like to say in India: Mere, tumhare, sabke liye, Happy Diwali!