On May 20, ITMO once again challenged stereotypes about education one more time, when it welcomed edtech experts, entrepreneurs, and lecturers at the Open Education conference to discuss the future of universities. Participants of this full-blown educational rave could visit workshops and lectures, cheer on rap battles, and even record a podcast. Here are the highlights of the event. 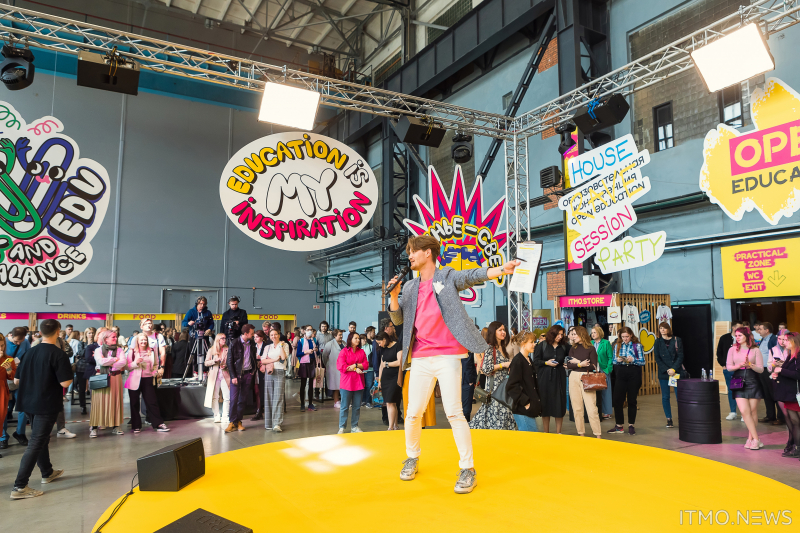 In 2022, the event was hosted at DAA Design District, where the organizers welcomed prominent experts in education, including university and school teachers, as well as business representatives and founders and teams of major edtech projects.

The conference opened with a panel discussion featuring rector of Moscow City University Igor Remorenko; Kinescope cofounder Alex Pavlychev; director for Development of Artificial Intelligence Technologies at Yandex Alexander Krainov; Skoltech Vice President for Development Alexander Safonov; and dean of ITMO’s Faculty of Infocommunication Technologies Alexander Kapitonov. The talk was moderated by popular Russian VJ Tutta Larsen. The speakers shared the opinion that though it is not possible to predict the kind of skills that will be in demand in a decade with utmost confidence, we can be sure that people with a fundamental education will have more chances to be sought-after specialists on the job market.

“Predicting who will be in demand in the labor market of the future is almost as impossible as predicting stock prices. However, the first thing to pay attention to is basic fundamental education. In IT this means understanding algorithms, having a strong background in math, and being able to code. Everything else changes fast. The one skill we need to practice over the course of our lives is the ability to learn new things and stay curious about the world,” says Alexander Krainov.

Such fundamental education can be acquired at universities, and in this sense various alternative formats (including online schools) will not pose a competition to higher education. However, in order to keep a finger on the pulse of the labor market and train the specialists that are in demand in business, universities should closely cooperate with companies.

“We need more synergy and cooperation so that first- and second-year students can immerse themselves into the atmosphere of tech companies. I don’t believe there are any current examples of such close integration between business and universities, especially if we are not talking about the likes of Yandex but rather startups and smaller companies. Nevertheless, such businesses have their own challenges that hinder their more intense cooperation with universities. That is why I believe the latter should have the initiative in this matter,” adds Alex Pavlychev.

Another important issue raised at the discussion was motivating specialists who graduated from Russian universities to stay in the country and build their careers here. According to Alexander Safonov, 78% of Skoltech graduates stay in Russia. He believes that the only way to keep such specialists in the country is to give them the chance to develop their own projects. Alexander Krainov seconded this opinion, highlighting the importance of this practice for the field of IT in particular.

“Our specialists are in high demand abroad and we have only one advantage we can use to keep them here. We know many stories of rapid career growth: when an intern gains quite an impact and significance in just a few years spent working at a company. This is almost impossible at a major international company, because the competition there is fierce while the possibilities for growth are low. And I am not only talking about higher management positions or salaries, but also about professional development,” concludes Alexander Krainov.

Another important topic covered at the conference was alternative education: the benefits of online schools and their potential to replace universities. Yulia Romanenko, head of the Soft Skills module at ITMO, moderated the respective discussion that featured director of the Institute of Education at Higher School of Economics Evgeniy Terentev; Lektorium founder Yakov Somov; a producer and host at Rozetka educational center Yulia Krinichnaya; and director for education development at SkillFactory (VK) Egor Sorokin. Asya Fursova, the dean of the School of Education at Universal University also took part in the discussion online.

According to Egor Sorokin, these days students particularly value services: support, assistance, and faculty. At his company, developing projects results in full-scale production of new products. This opinion was supported by other experts, who also create communities in their projects: apart from knowledge, they pay attention to adaptation skills and focus on psychological practices.

Can old-school universities meet these new demands? The experts agreed on the fact that online schools have become more successful in reacting to changing market conditions. Edtech companies quickly adapt to the demands of their students, they are more mobile, and can introduce new services fast. However, universities have other advantages that are there to stay: first of all, the fundamental training, which is needed to acquire new skills, and second, the community and the connections that will remain with students over the course of their lives.

That is why, according to Evgeniy Terentev, the competition is growing at the Master’s level. The expert believes that it is a great opportunity for universities to take the best from alternative formats, grow, and collaborate with online schools. In turn, Edtech companies can contribute their services and successful business management.

Digital technologies have been actively intertwining with our daily lives, including education, for the past several years. These changes were discussed by Kinescope cofounder Alex Pavlychev; director for digitalization of education at Moscow Institute of Physics and Technology (MIPT) Daria Grits; ex-Content Director at Skyeng, ex-CBDO at Skypro, and learning analytics consultant Mikhail Sverdlov; and head of the guidance department at XReady Lab Leonid Zmievskyi.

Marina Kazantseva, a managing partner at K&D Training, moderated the discussion. She asked the guest experts about the digital tools they integrated into the educational process. Daria Grits spoke about a digital service for students and lecturers that is now in development at MIPT. According to the expert, the university started developing an autonomous education management system even before the pandemic. The system was built based on the needs of students and faculty using the Jobs to Be Done framework. For instance, a student needs to keep track of deadlines, manage university emails, communicate in the forum for a course, and book a coworking space. All of this can be done in a mobile app.

“We created a product that is, on the one hand, customizable and developing, and on the other – integrated into the general MIPT data management system,” shared Daria Grits. “The university’s digital system is quickly developing and acquiring every feature that students currently need. For instance, we have a proctoring system, our own video hosting platform, and a video player that enables its users to create interactive videos. Our main takeaway from the development process was that education, including its digital forms, has to be user-friendly.”

Leonid Zmievskyi together with the teams from Skoltech and Higher School of Economics has built a virtual lab where students can conduct online experiments in VR: for instance, compact chromosomes, destroy nuclear shells, or move the periplast to another cellular pole. When developing the project, the team identified the key challenges that hinder the development of digital educational products: the lack of useful content or IT specialists, as well as unstable Wi-Fi connection. The team took these ideas into account and developed user-friendly controls: the data is streamed from multiple devices simultaneously, the process is constantly monitored, and user statistics is collected.

Smart Talk: a podcast about education

In the evening, the participants could attend a live podcast recording. The talk was hosted by ITMO’s First Vice Rector Daria Kozlova and popular TV host Anton Komolov, who asked questions to the head of the Presidential Physics and Mathematics Lyceum No. 239 Maxim Pratusevich and Netology founder, investor, and senior entrepreneur Maxim Spiridonov.

Over the course of the discussion, the experts talked about motivating students to learn at a time when everything can be found online, the skills that should be taught at schools and universities now, and the way the current educational system answers the demands of the time. Maxim Pratusevich returned to the idea that fundamental education defines a person’s advantages on the job market throughout their whole life. That is why it is crucial for schools and universities to equip students with this foundation.

“Fundamental education turns into fundamental discoveries. That is why I am certain that such classical education will be here to stay and the approach that, for instance, we rely on at the lyceum will turn into our advantage. At the same time, I agree that in the future education will merge more and more with various digital tools. For instance, big data and data analysis seem to be promising fields that might revolutionize education and evidence-based pedagogy,” shares Maxim Pratusevich.

Maxim Spiridonov agreed that fundamental training offers students a system, a foundation to build all their knowledge on. At the same time, the expert shared that he teaches his own children everything using applied solutions. “Knowledge is not just a memory stick; instead it should be packed into its possible applications,” states Maxim Spiridonov.

As part of the annual Edu Awards, 15 nominees for the award talked about their experience and educational projects on stage in three minute-long pitches. The audience had the opportunity to support the speakers they liked by voting for them and thus adding 10 points to their total.

All speakers aimed to inspire the audience not only with their projects, but also by telling a personal story about ITMO. Anton Boytsev, an associate professor at the Faculty of Control Systems and Robotics won at the pitch contest with his story about managing a situation that goes totally out of hand: he shared his experience of teaching online classes, the challenges he faces along the way, and how he could overcome them. You can watch all the pitches here.

As the final act of the event, the winners of this year’s Edu Awards were announced and invited on stage. Winners in the ITMO.EduLeaders track are Yulia Romanenko and Konstantin Pravdin, as well as five teams headed by Antonina Puchkovskaya, Alexandra Shparberg, Olga Gofman, Elena Bykovskaya, and Alexandra Maiurova (you can read more about there projects here).

Other discussions for professional educators were held alongside the main program. What is more, the participants could try their hand at new formats. For instance, Elena Bykovskaya, a lecturer at ITMO, and Valeria Ponomareva, an ITMO student, held an actual rap battle about being able to create your own curriculum. You can watch this epic struggle, as well as other talks and discussions here (in Russian).