Scientists from ITMO University’s Research Institute of Laser Physics have developed a high-power laser with short pulse duration for use in a lunar laser locator. The locator will make it possible to measure the distance between the Moon and Earth with a margin of error of just a few millimeters. This would make it possible to correct calculations of celestial coordinates of the Moon in order to improve the accuracy of satellite navigation systems. An article on the new laser was published in Optics Letters. 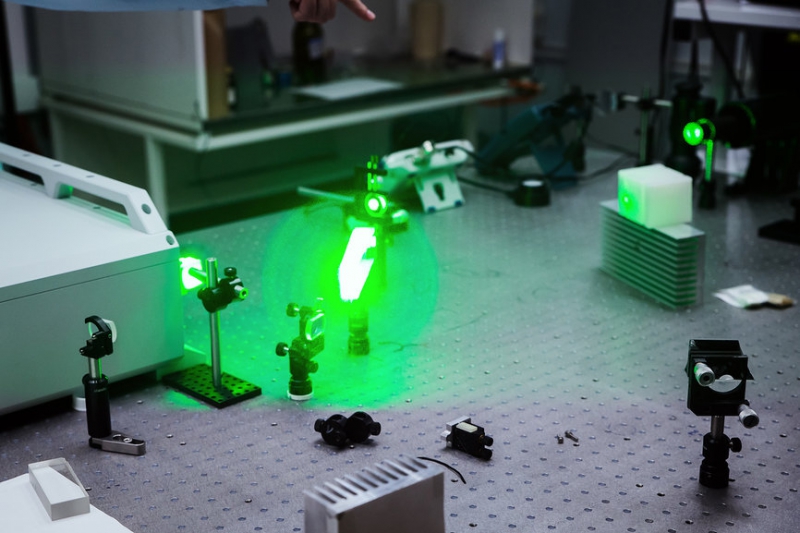 The Moon and Satellite Navigation

Both GPS and GLONASS systems are based on accurate measurement of the distance between an object and several satellites. Satellite coordinates must be as accurate as possible to ensure precise object location. Since satellites move in circular or elliptical orbits around the center of masses "Earth-Moon-Sun-planets", a correction factor should be introduced while calculating satellite coordinates. This correction factor takes into account the distance between the Earth and the Moon, which can be most precisely measured with a lunar laser locator.

Such a locator determines the distance from Earth to corner reflectors on the lunar surface. The reflectors function much like those on bikes or cars, returning the laser beam strictly in the opposite direction with minimal scattering. The accuracy of a laser locator depends on the duration of its laser pulse and resolution of the receiver. The shorter the impulse, the higher is the accuracy.

Scientists from ITMO University’s Research Institute of Laser Physics have developed a laser capable of measuring the distance to the Moon with the margin of error of a few millimeters. Obtained data about the Moon orbit will be used for the GLONASS system. This will make it possible to calculate satellite orbit data with higher precision, making the Russian navigational system much more accurate. The margin of error when locating users may be reduced to 10 cm.

Such an increase in accuracy was made possible due to the locator’s specifics of design, including a unique combination of laser parameters: a short pulse duration, high pulse energy, and high pulse repetition rate. The laser pulse duration is 64 ps, which is almost 16 billion times less than one second. The output pulse energy accounts to 250 mJ at the “green” wavelength and 430 mJ at the “infrared” wavelength. The pulse repetition rate is 200 Hz.

"Actually, creating a laser with a pulse duration of tens of picoseconds is no longer technically difficult," says Roman Balmashnov, an engineer at the Research Institute of Laser Physics and PhD student of ITMO University’s School of Photonics. “However, our laser’s average pulse energy is much higher than that of its counterparts. And the laser’s beam divergence, which determines radiation brightness at large distances, is close to the theoretical limit, being several times lower than that offered by other devices on the market. We also managed to achieve a high pulse repetition rate and energy stability, so the pulse energy does not vary from pulse to pulse."

How Does It Work?

The laser consists of a low-power generator, a regenerative preamplifier, and an output amplifier. The laser’s autofocusing system compensates for the thermal aberrations arising in active laser elements operating at a high pulse repetition rate. Such aberrations lead to a wider laser beam angle and increase its divergence.

"The main distinctive feature of our laser, perhaps, is the construction of the amplifier output stages. We used pumping systems based on alumina-yttrium garnet crystals doped with neodymium ions; we created a rather complex optical structure with lenses, mirrors, and vacuum cells. In addition, we developed a highly stable master oscillator of picosecond pulses based on a microchip hundreds of microns thick, pumped by a laser diode. Its radiation is later amplified 100 times in the regenerative preamplifier and about 100 times in the output amplifier," says project head Alexei Kornev, a lead engineer at ITMO University’s Research Institute of Laser Physics.

A laser of such type can be used not only for increasing the accuracy of navigational systems. For example, a group of scientists from the Research Institute of Laser Physics is currently working on a laser intended for removal of space debris. It will be capable of identifying objects in orbit and, if necessary, pushing them away using radiation pressure.

"The laser we’ve developed is cutting-edge by several criteria. According to our data, it is the most powerful pulse-periodic picosecond source of laser radiation in the world. In addition to ranging applications, lasers of this class can be used for imaging of orbital objects: for example, satellites or space debris," notes Andrey Mak, the head of ITMO University’s Research Institute of Laser Physics.