Vaagn Ogannisian is a graduate of the St. Petersburg State University of Refrigeration and Food Processing Technologies (now – ITMO University’s School of Biotechnology and Cryogenic Systems). Vaagn is a second-generation professional beer brewer. Ten years after his graduation, he still maintains a relationship with his alma mater by partnering up with ITMO for various events and inviting students to do internships at his company. In this interview with ITMO.NEWS, he talks education, business, and career. 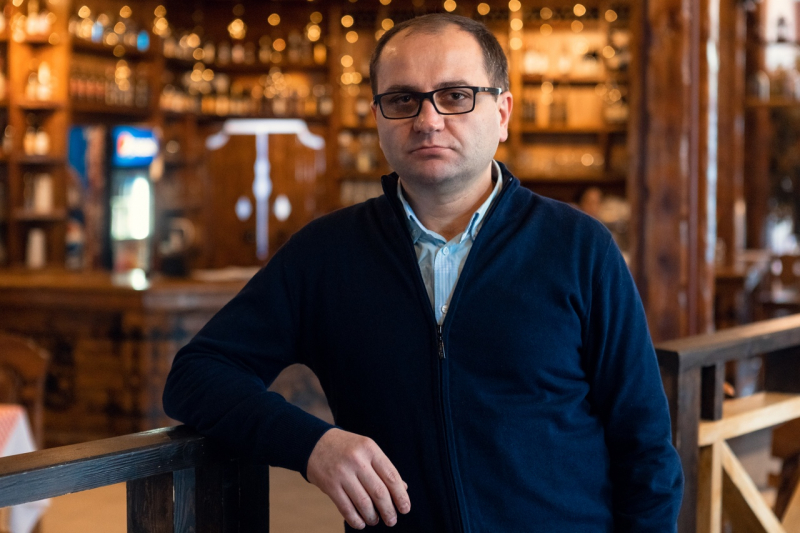 Vaagn, how did you get into brewing beer?

I’ve known this trade since childhood. My parents are beer brewers, too: my father is a process specialist who is the head of a brewing room at the Yerevan Beer Factory, and my mother is the chair of the trade union at the same factory. They always talked shop at home: about beer, about technology. I probably never had the chance to choose anything else. But I became genuinely interested in this profession and fell in love with it, so I never regretted that choice.

So it wasn’t your parents’ choice?

Yes, it was my own. They only wanted to help, such as with choosing a university.

Do you feel a higher degree of responsibility because of having the same job as they do?

Of course, you feel a special sense of responsibility when following in their footsteps. At the very least, you should improve on what they’ve achieved and never be in a situation where your lack of professionalism causes them discomfort.

How did your career develop after you graduated?

I first started working in my final years of Specialist’s degree studies, as a filter operator at the Tinkoff Brewery. I was there from 2002 to 2006: in that time, I climbed all the way up to the position of chief process manager of the entire network of breweries all over the country, of which there were ten. I left because I wanted to go back to Armenia. When I got there, I worked for two years at the same factory as my parents. It’s a massive facility, much larger than Tinkoff. But in 2008, I decided to move back to St. Petersburg to study and work here. I enrolled in a PhD program and started working at the Vaclav brewery. Brewing is the pillar of our business. We launched a mini-factory and got all the equipment to allow us to serve beer of our own making at our restaurants.

How difficult is it to launch your own factory?

There’s no easy business. Of course, you need the finances and the knowledge, that much is clear. But there’s no reason to be afraid. If you approach things professionally, you can do it.

Speaking of your restaurants. Why did you decide to sell your own beer there instead of serving existing products?

It is, unfortunately, more profitable to buy and sell than make your own. But we brew beer because that’s where we started. Our brewery was the foundation, the beginning of this business. Now, we have about a dozen types of beer: Czech and German classics, Belgian fruit beers, craft beers. So our perspective is that of brewers, not restaurant owners.

Do you get tired of your work? How do you deal with that?

Naturally, monotonous work can get tiring. I myself am always looking for new things to do within my field. I started as a filter operator, then I was a process manager, and when I got bored of that, I switched to project work and dealing with equipment. Now, I rarely deal with technology – only for my own entertainment.

Staying in touch with the alma mater

You got your PhD at ITMO University. What did you study?

My thesis was about the production technologies of non-alcoholic beer.

What do you remember of your student days?

Surprisingly, my most vivid memories are of the studies themselves: the classes, the practical training.

What drives you to stay in touch with the university?

I’m simply friends with the university and with many of my teachers. We’ve established cordial relationships that have lasted for many years.

Do you invite ITMO students to do internships at your company?

We do. We’re always glad to see them. It’s important for a business to maintain a good relationship with universities, as they are where talent comes from. As a business, you must sometimes help universities out, because raising specialists is our common goal.

You began at one university and graduated from another. Was this a positive change?

I believe these were changes for the better, as ITMO is a more technology-focused university than the University of Refrigeration was, and their merger had a positive effect on the professional skills of students in our field. And with the current trend of bringing process managers, mechanical engineers, and programmers closer, the technological prowess of these students makes them better qualified and more valuable as employees.

Value your time. Don’t waste it for no good reason. If you’ve picked a field, study it earnestly. Sometimes, students refuse to learn and cut corners, thinking they’re fooling their teachers; in fact, they’re only fooling themselves because they’re wasting the time they’ve got to learn their trade. So learn, do what you love, and become good at what you do.