Bike Ride With the Rector 12.0: Participants Share Their Impressions and Pandemic Experience

On Tuesday evening, dozens of ITMO University students and staff met for a traditional bike ride with Rector Vladimir Vasilyev. An ITMO.NEWS journalist also joined the cyclists and talked to some of the participants. 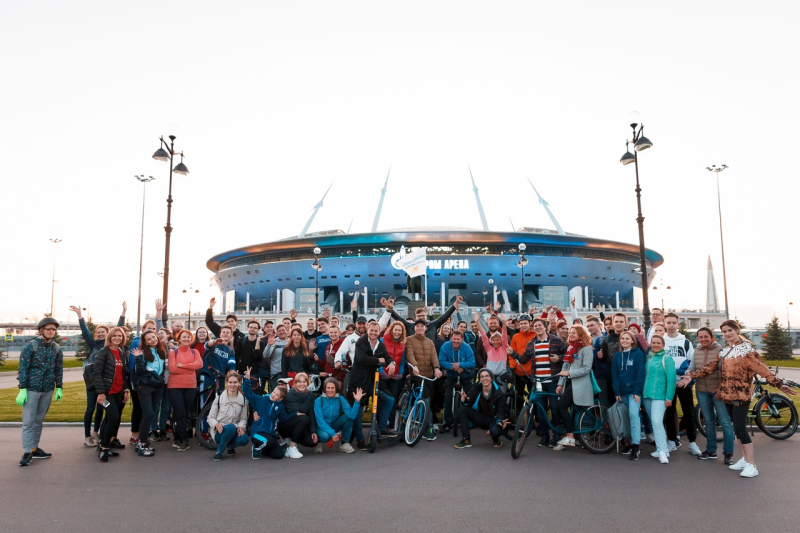 The participants of the bike ride started showing up at the entrance of the Primorsky Victory Park about forty minutes before the actual start. At first, people mainly came on scooters, then more and more – on bicycles. The mascot of the KronBars sports club was there for the cyclists to show some school spirit and encourage them.

By six o’clock, when the start was planned, several dozen students and staff from different university departments gathered on the spot – it resembled a showcase of various vehicles: folding, mountain, and city bikes, scooters, e-scooters, and even one unicycle.

Unlike last year, this time, the brilliant weather came as a pleasant surprise. The group of cyclists set off from the Primorsky Victory Park. The first stop was in front of the Lakhta Center. Then, the cyclists decided to turn back to Krestovsky Island. After a quick stop near the Yakhtenny Bridge, students and staff returned to the home stadium of the Zenit football club, where they took the final photo.

Several participants talked to ITMO.NEWS and shared why they decided to devote their Tuesday evening to cycling and how the pandemic affected their love for two-wheeled vehicles.

This is my second bike ride. Last year, I enjoyed the atmosphere, it is great that everyone rides side by side. I love to ride in good company. Today, I am riding my scooter – I sold my bike about a year ago when I moved. The scooter turned out to be very mobile, I have been using it for over a year now and, in total, I have ridden 2,800 kilometers around the city. I think it is a very environment-friendly and convenient vehicle.

When we were encouraged to practice social distancing, I mostly stayed at home. Later on, I started to ride again. Sometimes I enjoy a good scooter ride. A couple of times, I went to Zelenogorsk (I took a train there) after my English class on Saturdays and I rode 20 km along the Zelenogorskoe highway to Solnechnoye or Repino. Also, I used a new kick scooter sharing service a few times to move between campuses – it makes it much easier.

Ekaterina Mashina, third-year student at the School of Computer Technologies and Control

I went on my first bike ride with the Rector mostly because I was curious. I wanted to see and experience it and take some photos. I really liked it – especially the warm and democratic atmosphere. And since then I have not missed a single bike ride. So, today is my fourth one. My friends are here, too. I enjoy their company. And after each bike ride, I get even more new friends.

Why scooter? It's simple. I live in the city south and getting to the Primorsky Victory Park by bicycle during rush hours, is quite challenging. For one of my previous rides, I took my bike to the metro and it turned out to be an epic experience with all these transfers. After that, I went for a ride by scooter that I use to get around the city.

I don't exactly like e-scooters: you have no right to say you are committed to a healthy lifestyle. So, for those who live far away, I would recommend coming for a bike ride with the Rector by regular scooter.

Marina Abramenko, third-year student at the Faculty of Physics and Engineering

This is my first time joining the bike ride. We were told that the dean of our faculty, Pavel Belov would be coming so we couldn’t miss it. I rode here by bike which I rented out for the occasion. I ride a lot and often, but I don't have my own bike, because I move all the time and so it makes more sense to rent one out.

During the pandemic, I was constantly riding. The funny thing is, I first started riding a bike only at the beginning of this year. Since then, I’ve gone on some lengthy rides, up to 130 km.

Riding a bike to university is not so convenient because bike rentals do not open that early. However, if I had one, I would definitely do it.

Egor Kurganov, third-year student at the Faculty of Physics and Engineering

One of my main intentions of participating today was to support cycling at ITMO University. It seems to be a bit underestimated here. I like to cycle and last semester, when we were studying remotely, I had the opportunity to do cycling instead of my PE classes, which was really convenient.

Generally, I like to ride a bike when the weather is good. I have ridden in my hometown Novosibirsk in winter but I haven’t tried it yet in St. Petersburg.

The pandemic has not changed much for me, I already rode my bike all the time. To do it daily you don't really need any special equipment. It is not difficult to find comfortable clothes, and you can ride up to 10 kilometers in jeans and casual clothes. The only thing I would recommend is to wear a helmet.

Victoria Dorofeeva, third-year student at the Faculty of Technological Management and Innovations

Today, I am joining the bike ride for the first time. Before that, I always had classes during the ride and only in my third year did this dream finally come true. There is a wonderful atmosphere here, people get the emotions they need.

I rented a bike today. In general, I am quite comfortable on a bike, as long as they are single-speed bikes with no additional gears. I always had such a bike back home.

This spring, when the pandemic began, I switched to a scooter – it is more popular and mobile. My longest scooter ride was about three hours – to the city center and back to Kupchino. I had a great time! But today, I came by bike because I haven't ridden it for a while.