Computers can outperform people in many fields – but, it seemed, not in the art of making jokes. ITMO University researchers decided to try and dispute this claim. This year, to celebrate April Fools’ Day they taught GPT-3, the world’s most powerful text-generating algorithm, to make jokes. Now anyone on the internet can test the results of their work. 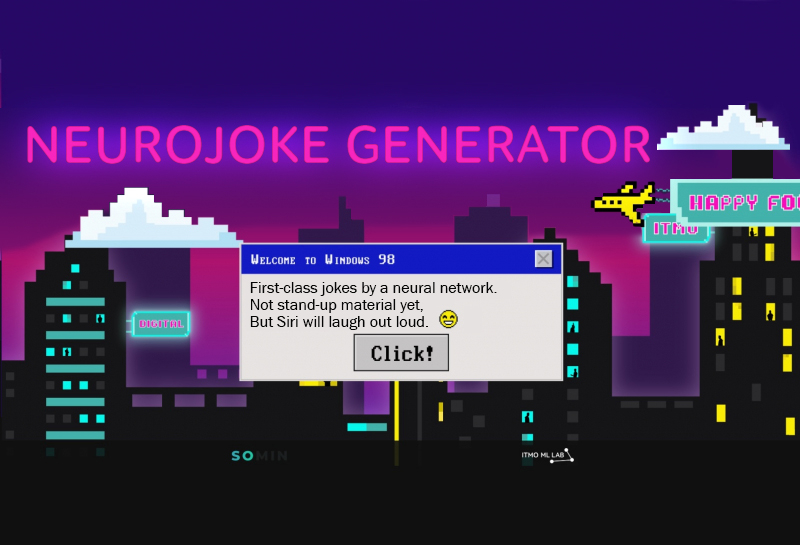 Can a robot come up with a joke? This sounds challenging, for jokes in their essence are paradoxes, they step outside the rules of logic – but such rules are key for an algorithm to function. On the other hand, jokes also have their laws and structure, which can be grasped by a neural network.

In order to prove this hypothesis, ITMO experts created a website where GPT-3, the most advanced text-generating algorithm in the world, tells all sorts of jokes based on the classic trope “X walks into a bar and orders…” The trope has a clear structure and thousands of variations, which is ideal for a neural network.

Users can set three parameters: who walks in, how they do it, and what they order. In total, there are over 300 combinations. After the parameters are set, the network will tell the whole story based on the selected combo.

“In contrast to other networks that usually solve a particular task, GPT-3 is much more versatile because it can be quickly retrained on another set of examples. It is already trained on almost everything there is on the internet, in every language,” says Alexander Farseev, a professor at ITMO’s Machine Learning Lab. “We can say that it has memorized everything it was trained on, so the phrases it generates are essentially pieces of sentences that someone has once used in a certain context. Its database also features jokes people tell online.”

The team admits that the jokes created by GPT-3 are not always perfect. After all, it is still a rather novel task for machine learning. However, the most important aim of the experiment was to demonstrate the actual capacities of contemporary neural networks.

“This amusing experiment was meant to showcase the real capabilities of GPT-3, so we intentionally left the text generated by the algorithm unedited. This is raw data – no human intervention. Yes, these jokes will hardly make a stand-up tour, but they will definitely give Siri or Yandex’s Alisa a good laugh,” adds Alexander Gostev, deputy head of ITMO’s Event Management Office.

We’ll note that earlier ITMO researchers together with their collaborators from Sweden, Italy, and France created a model that introduces subjectivity into the process of analysing texts.

ITMO University received access to GPT-3 in early February 2021, when SoMin.ai, a project created by Alexander Farseev, became an official partner of the OpenAI company founded by Elon Musk. Only a limited number of companies and universities around the world have access to GPT-3.