Scientists from ITMO University’s School of Biotechnology and Cryogenic Systems actively focus on making everyday foods better, safer and more accessible. By replacing just one ingredient in a bread formulation, the researchers managed to make this product more resistant to microorganisms that cause it to spoil. Now, they are experimenting with replacing the same ingredient in beer. If this goes well, the drink will be less strong and will acquire probiotic properties. ITMO.NEWS contacted the scientists to find out how beer’s properties depend on yeast, and also how bread can fall victim to rope spoilage. 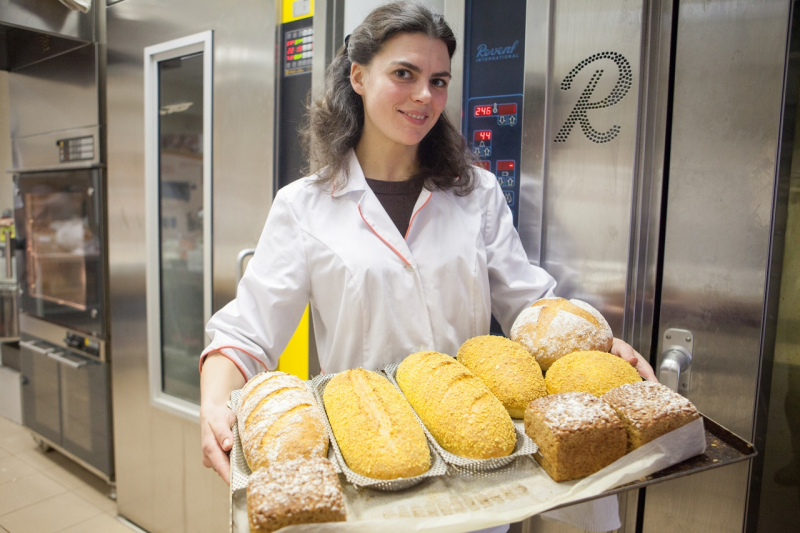 Production of bread at ITMO University

Everyone who has ever cooked even a single dish knows that replacing one ingredient can lead to significant changes in its taste, color, and other characteristics. This is especially pertinent for products made from a small number of ingredients.

How can modern science aid bread making or brewing? People have been baking bread and brewing beer for millennia, and it would seem that it would be extremely hard to discover something fundamentally new in these fields. But this isn’t so: the methods for making these age-old products are constantly being perfected to make them cheaper, more stable in terms of storage, and at the same time tastier.

One of the most important components of bread is yeast – a natural leavening agent that imparts bread its fluffy texture and distinctive aroma. The yeast that’s used in baking is of the Saccharomyces cerevisiae kind. The same microorganisms are what helps wort to ferment, making it into beer.

But what if yeast, while keeping these functions, would also be able to give products new properties? Is it possible to pick a yeast strain that would prevent bread from spoiling prematurely? ITMO University researchers have suggested that a related group of microorganisms – Saccharomyces cerevisiae var. boulardii – could in fact be this multifunctional analogue to the classical baker’s yeast.

“This is a tropical yeast strain discovered by French microbiologist Henri Boulard in the beginning of 1920s,” explains Elena Soboleva, an associate professor at the School of School of Biotechnology and Cryogenic Systems. “During his travels across mainland Southeast Asia, he was studying the cholera epidemic and saw that the locals would treat themselves with fruit. Later, having examined the matter in more detail, he discovered that it wasn’t so much about fruits as it was about microorganisms living on their surface. This led him to identify a previously unknown species of yeast, which he called Saccharomyces boulardii and patented as a remedy for diarrhea.”

However, with the development of phylogenetic analyses, it was found that Saccharomyces boulardii is a variation of the species Saccharomyces cerevisiae.

Today, this type of yeast is used as a probiotic to restore the gut microbiome. What’s more, according to the scientists, recent research has shown that this yeast has antioxidant properties and allows the body to better absorb useful microelements and B vitamins.

One of the problems encountered by bakers is the so-called rope spoilage, caused by Bacillus licheniformis and Bacillus subtilis types of bacteria. These microorganisms can get into seeds from the soil, and make their way into bread unimpeded. It’s very difficult to detect these bacterial spores even under the most thorough quality control.

“Sometimes you can hear the opinion that baking in the oven makes bread sterile, but in reality it isn’t so,” says Elena Soboleva. “For instance, while the vegetative cells of the rope bacilli die during baking, spores manage to survive heat treatment. On their own, they’re largely innocuous, but under certain conditions (for example, under high humidity and temperature) bread can develop the so-called rope disease. The bread starts to give off an unpleasant fruity odor similar to the scent of rotting melon, and, as the disease progresses, the bread crumb becomes sticky and stretchy. Of course, such bread cannot be eaten.”

There are many methods to prevent rope disease from developing – ranging from chemical to physical and biological. For example, the rope bacilli don’t tolerate acidic environments, which is why starter cultures are widely used in bread production. However, it was discovered that Saccharomyces boulardii yeast can also be used to protect bread from Bacillus licheniformis spores.

The research established that these show antagonistic activity against B. subtilis and B. licheniformis bacteria, and have a bacteriostatic effect on rope disease pathogens.

“This yeast is able to produce antibiotic substances that inhibit the activity of spores of rope bacilli, all while working like regular yeast,” points out Elena Soboleva. “We’ve conducted several experiments using different bread production technologies. To guarantee the development of rope disease, favorable conditions – humid and warm environment – were created after the bread had been baked. Using the yeast allows us to slow down the development of the disease up to three days, which is significant for such a product.”

But the scientists’ experiments didn’t stop on bread. If Saccharomyces boulardii is used as a probiotic, why not impart this property to beer?

ITMO University has an experimental laboratory on the production of fermented drinks. It is here that the plans for the creation of unfiltered beer using this yeast are developed and implemented.

“We expect the beer to acquire probiotic and antioxidant properties; what’s more, the development of the S. boulardii yeast will allow us to produce beer with lower ethanol content,” shares Artyom Morozov, a PhD student at the Faculty of Food Biotechnologies and Engineering.

The works are planned to start after the restrictions associated with the COVID-19 pandemic have been lifted.

Fundamental aspect of the work

However, the work on the possible applications of Saccharomyces boulardii in the food industry is just one of many stages. For this research to be introduced into the market, it’s necessary to not only show the advantages of using this yeast strain, but also propose an effective way for their cultivation.

This is due to the fact that one of the special features of the Saccharomyces boulardii metabolism is the optimal growth temperature of 37°C, as well as resistance to low acidity (pH 3.2-4). For the classical baker’s yeast, these values amount to around 30°C and pH 4-6 respectively. The scientists are currently working towards creating optimal conditions that will favor the production of the maximum amount of yeast with minimal costs.