An international research team has produced the first-ever dielectric metasurfaces for nonlinear light conversion. Using these structures, scientists have been able to convert infrared radiation into visible light. They have also been able to implement additional functions: an ability to deflect light at a specific angle and to change the light polarization. Kirill Koshelev, a researcher at the Nanophotonics and Metamaterials Laboratory and one of the study’s authors, spoke to ITMO.NEWS about the project and the significance of its results. 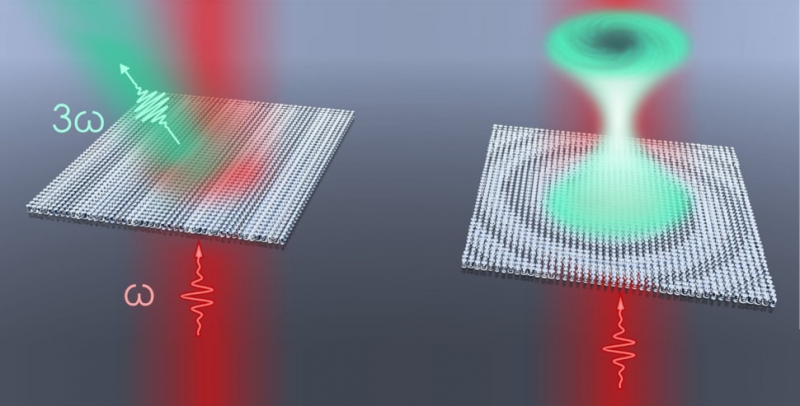 People have been using optics to control light for years. We’re used to glasses, lasers, telescopes. They all do what we need them to, but they’re all too big. Today, everyone is trying to transition towards compact, nanoscale devices. Metasurfaces are thin films of nanoparticles placed in a specific pattern on a plate, and they provide us with great opportunities for just that.

Researchers have been working on metasurfaces for the past decade, but today, modern equipment has finally allowed us to transition from theory to production. First, we had plasmonic metasurfaces based on metals. They function based on plasmon excitation, i.e. the density fluctuation of electronic gases along the surface of metals. Using this type of metasurfaces, scientists were able to reproduce the functions of regular, linear optics, which include manipulation of lightwaves’ direction, amplitude and polarization. However, due to massive energy loss they were unable to make them as effective as regular optical devices.

Today, physicists are trying to transition into a nonlinear mode, which means also having control over the frequency of light. This kind of technology can, for instance, make the heat radiated by human bodies visible by converting it from infrared to the visible part of the spectrum, letting us see humans in total darkness. Scientists only started researching nonlinear metasurfaces recently, and it turns out that plasmonic metasurfaces aren’t effective in a nonlinear mode. The thing is, you have to apply a powerful pulse to change the frequency of a lightwave. Metals heat up under the impact of such pulses, there’s a massive energy loss at play, and the end intensity of light decreases. Besides, metal might just melt.

Dielectric metasurfaces have been suggested as a substitute for metals. Dielectrics such as silicon don’t absorb much in the common frequency bands and barely heat up. In linear mode, they are much more useful than metals. Their high refraction index lets them “shrink” a wave inside a particle, making it proportionate to the structure.

Despite this advantage, all existing dielectric metasurfaces have so far been made in linear mode. In a recent project we did with our colleagues from the Australian National University and Oak Ridge National Laboratory (USA), we attempted to create the world’s first nonlinear dielectric metasurface and succeeded. Our study was published in Nano Letters. We were able to implement two types of metasurfaces: a deflector and a vortex. A deflector deflects a wave at a specific angle, while a vortex changes light polarization from linear to circular. In fact, our basic concept can be used to implement practically any function in nonlinear mode. In that sense, our method is universal.

Most optical devices are based on controlling the phase of a lightwave. A phase is the relative oscillation of waves: they may oscillate simultaneously or with a certain delay. In nanodevices, the phase can be adjusted by means of, for example, exciting resonance. When you make a nanostructure resonate, it responds with a delay. Since the resonance depends on a structure’s size and share, changing its geometry lets us manipulate the wave phase.

Our idea was to create a metasurface from particles of different geometries. This way, we can have a different phase in different parts of a light beam. It lets us change the direction, polarization and other properties of light. We can create a set of differently-shaped particles and, potentially, use them for any function just by placing the particles in a specific way. At the same time, it’s important that we don’t lose any light intensity. We were aware of the idea of using different particles, but it was the first time that we were able to adapt it for nonlinear optics and create a working structure.

The research was undertaken under the supervision of Professor Yuri Kivshar and included three main stages: theoretical analysis, quantitative modeling and experiment. First, we developed a general theory that allowed us to predict how a particle’s shape would affect its interaction with light. Having determined an approximate scope of particle sizes, we used an Australian supercomputer to recalculate those parameters in more detail. It wasn’t easy, as we had to try a great deal of values in the given range. That was Lei Wang’s responsibility; he helped us understand just what the particles should be like and how we should place them to get the right result.

After modeling, we initiated the experiments. Sergey Kruk went to Oak Ridge, where he and Ivan Kravchenko used the equipment there to create a number of experimental prototypes. The prototypes were then shipped to Australia, were we measured them and identified the best ones. In the end, we were able to experimentally prove that metasurfaces can change the properties of lightwaves and carry out nonlinear conversion effectively.

The deflector and vortex are the first successful examples of dielectric metasurfaces in nonlinear mode. We are currently planning to implement other interesting and potentially useful functions, like holograms.