At the beginning of March, a number of ITMO University students went to Innopolis University to participate in the Competition of the National Technology Initiative, which they ended up winning. Previously held exclusively for school students, in 2019 the competition was spread to university students. By participant’s accounts, the organization process wasn’t always up to standard, but the four days of dynamic work and exciting collaborations at the state-of-the-art science center and communication were worth it. More on the competition and life in Innopolis below. 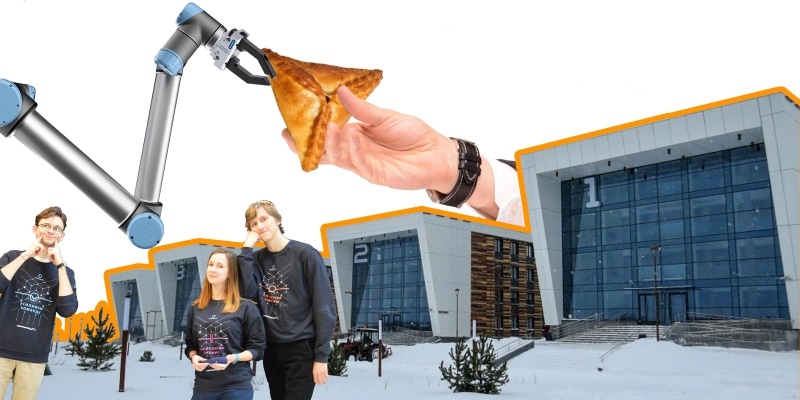 Collage by the winning ITMO team

About the NTI Competition

Launched in 2015, the Competition of the National Technology Initiative is aimed at searching for and developing talent to participate in the program for the creation of conceptually new markets and the ensuring of Russia’s global technological leadership by 2035. It’s held annually by the Agency for Strategic Initiatives and Russian Venture Company together with Innopolis University, Moscow Institute of Physics and Technology, Bauman Moscow State Technical University, ITMO University and other major scientific and academic organizations.

The competition consists of 19 educational tracks, each corresponding to one of NTI’s priority areas. These are aerospace systems, nanoengineering, cognitive technologies and many others.

As per the rules, anyone can apply for participation in the contest, to then receive a task to complete and go the finals if successful. The locations of the final round depend on the educational track it’s held in: Moscow and Novosibirsk for Nanosystems, Tomsk for Smart Cities, Vladivostok for VR, to name but a few.

Finals at Innopolis: how it was

This year is the first time that university students have been invited to partake in the NTI competition. Valery Chernov, Evgenia Sevasteeva and Artem Egorov, second-year ITMO University students from the program “Intelligent Technologies in Robotics”, competed in the track “Intelligent Robotic Systems” along with other 78 other teams and won themselves a place at the track’s final round at Innopolis University. They say that they really enjoyed the life at one of Russia’s most modern scientific centers.

“It’s telling that in all four days of our being there, there were only three times that we ventured outside: upon our arrival, once to do a grocery shop, and after the finals when everyone went out to celebrate. Innopolis is built in a way that nothing distracts you from science: there’s no need in going outside when all four of the university’s buildings are connected with underground tunnels. You can get to the lab right from your room, still wearing your PJs and slippers. The dorm itself can give many a hotel a good run for their money. All rooms offer enough personal space, everywhere has comfortable couches for you to rest on, and communal kitchens are very convenient. This might well be the best student dormitory in Russia,” shares Valery Chernov.

The task ITMO students were given was based on a manipulator. Used in industrial areas, this is a special device for transporting objects within the boundaries of its operational zone. The task comprised three objectives: to assemble the device’s pyramid frame from given details with pre-set coordinates, to connect it to a camera that would locate objects’ positions, and to ensure that the device would cease operating as soon as a person gets into its operational zone.

The team had to squeeze in a lot of work to deliver on all objectives. According to Valery Chernov, the night before handing the task in, they were forced to work in shifts with two members working and one sleeping. But even with such a hardcore division of labor, finishing the task was very tough.

Fortunately, their uneasy burden was shared by an instructor; every team participating in the competition had one. This role was filled in by a Master’s or PhD student who helped their proteges navigate in the big university campus and solve the most difficult tasks. In case with ITMO team, this was a mutually beneficial collaboration: while their instructor gave them advice on solving the task, Valery, Artem and Evgenia helped him with some of his homework.

Adding to the already significant level of difficulty were organizational glitches. According to the students, these started as early as in the qualification round, with its tasks confusingly having nothing in common with what they had to face in the finals.

“Our team in particular got lucky because we worked with some very cool equipment. Others, though, had to solve tasks based not on hardware but 3D simulation on the Unity engine. Just a couple of days prior to the start of the finals, the organizers sent out an email saying that it would be great if the teams included at least one specialist with experience of working with this software,” says Evgenia Sevasteeva.

But the students want to cut the organizers some slack, saying that they did recognize their mistake and did their best to solve it as fast as they could. At the end of each day, the participants were gathered together to discuss and give feedback on the problems they encountered. According to Artem Egorov, discussing common experiences after a hard day of work was not only useful but fun.

Prize for the most comprehensive approach to the project

At the end of the four-day finals, ITMO University students were among the teams crowned winners of the grueling competition, claiming the main prize for the most comprehensive approach to the project. Two other teams were recognized in the categories of most in-depth approach and most unconventional solution; together with ITMO students’ prize, these accounted for the first, second and third place respectively.

All winners of the NTI competition were invited to participate in two summers schools in Innopolis University, the first exploring control of self-driving cars and the second conscience, perception and control of robots. The team from ITMO plan on combining their summer studies at Innopolis with continuing their work on their project to make their manipulator device ready to be used in real-world industrial processes.