Representing ITMO at the hackathon were four teams, two of which won in their respective tracks and passed into the finals. One of them, Golden PSZh, became the all-round winner of Russia’s first large-scale hackathon on digitalization in the field of tourism. Right now, the students are in discussions on incorporating their system into a potential customer’s operations. More on the students’ training in the Digital Generation club, the tracks and the solutions, as well as their impressions of the event in this article by ITMO.NEWS. 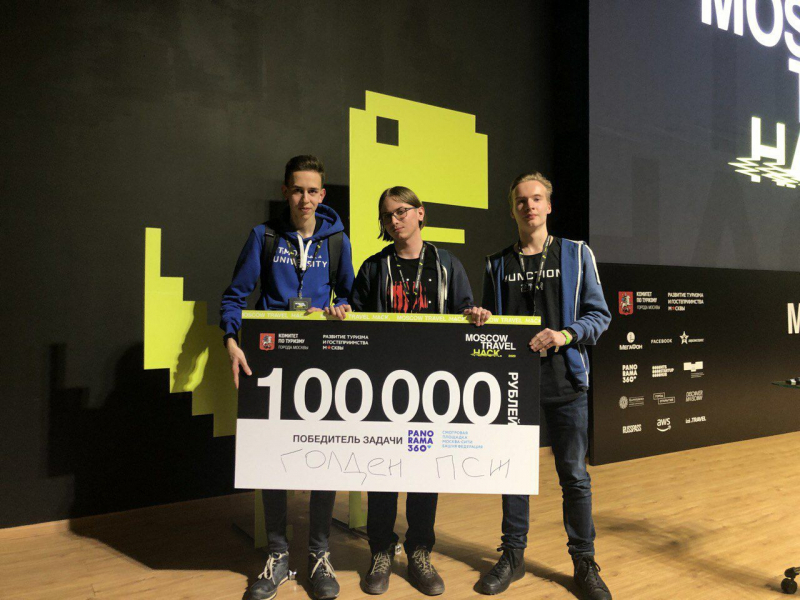 The Moscow Travel Hack hackathon was dedicated to the development of digitalization in the field of tourism. The event was organized by the Committee for Tourism of Moscow with MegaFon, Facebook, Panorama 360, Aeroexpress, MTS, Tsaritsyno Museum-Reserve, Discover Moscow, City of Discoveries, and Russpass stepping in as partners and submitting their tasks to the participants.

The hackathon lasted 30 hours, during which 50 teams, five per each of the ten tracks, were searching for creative solutions to the commissioned tasks. A total of ten teams made it into the finals, one per every nomination. Among them were two ITMO University teams: VoidNameNull (Neola Lisitsyna, Daniil Litvinenko, Vsevolod Kosarev) and Golden PSZh (Mikhail Ershov, Alexander Blashenkov, Pavel Zolotov). It was the latter that claimed the title of the hackathon’s all-round champion.

The news about the impending hackathon had been reported by the Digital Generation club, which simultaneously launched the selection of potential participants from among ITMO University students. A total of 11 teams were then formed from 50 successful candidates, who attended several lectures and participated in the workshops by leading experts in the field of digital solutions.

“We offered the students to attend lectures and apply for the Moscow hackathon. In the end, four teams went to the event. By the way, it was in the club that the members of the Golden PSZh team learned about the hackathon and did their training. This was the biggest hackathon in the period of January–February 2020: both in the scale at which it was organized and the number of participants and experts present at the venue. I’d also taken part, but our team took second place in our track and hence didn’t qualify for the superfinals. But we stayed in touch with the students. The organizers booked them a room at Moscow-City so that they could spend two days communicating with the hackathon’s partner companies. Meanwhile, we connected the team’s members with the specialists from ITMO Technopark so that they could consult the students in regard to various legal questions: how to file for a patent, how to sell an invention, how to organize your project as an LLC, for example. As far as I know, this team is now continuing the talks, and on our part we’re really glad for them and hope that everything will go smoothly,” commented Kirill Plugin, fourth-year student at ITMO’s Information Technologies and Programming Faculty and cofounder of the inter-university club Digital Generation.

The team VoidNameNull had a go at the task of the educational and tourist project “City of Discoveries”. The participants developed a platform that ensures fast and convenient communication between tourist agencies, schools, students and parents. The marketplace’s functionality allows for creating, booking and purchasing tours.

City of Discoveries is a project that offers seven-to-11-grade students from different Russian regions educational and tourist trips in eight different fields: from urban studies to biotechnologies and power industry. The tours include visits to companies, manufacturing facilities, specialized universities, technoparks, and cultural objects in a chosen sphere.

“The client’s problem was that now, all applications from the website must be processed by operator manually. A service was needed that would allow school students to independently choose a destination and a tour by completing a quiz, after which their parents could connect with the operators on the same platform to discuss all the details of the future trip. We gave thorough consideration to the client’s wishes and the organizers’ comments – we met every condition and even adapted the client’s brand colors to the new website. We’re continuing to discuss the project’s future directly with the client, I think that the marketplace will be implemented. All in all, I really enjoyed the hackathon: it was a useful experience that featured a lot of networking and access to expert advice. Despite the fact that it was our first hackathon and we only had 30 hours to do the work, we did well and won. Now we have even more confidence in ourselves and our skills,” shared Neola Lisitsyna, first-year student at ITMO’s Faculty of Software Engineering and Computer Systems and the team’s member.

“We did something experts couldn’t”

The team Golden PSZh worked on a project for Panorama 360, the Federation Tower’s observation deck. The members created an app for automatic processing of photos from the deck’s photozone. The app removes the background against which the visitors make their photos – and it doesn’t have to be green or blue. Then, the system offers to change it to a different one.

“We’ve developed an app for Panorama 360. The organizers and the company’s representatives really liked it, more than that, they were left surprised by it. As it turned out, they’d been trying to solve this task for two years and even invited experts from Singapore, who created a prototype which broke down in a week. And then in we came and in just 28 hours managed to do something Singaporean experts couldn’t,” said Pavel Zolotov, first-year student at the Faculty of Infocommunication Technologies and member of the Golden PSZh team.

“The hackathon is an opportunity to meet representatives of major companies and receive recommendations and feedback on our work. As of now we’re continuing our talks with Panorama 360 and planning to complete the app we develop at the hackathon. I think that were it not for this event, it’d take us much longer to come to such serious tasks and working with a big business,” explained Alexander Blashenkov, second-year student at the Information Technologies and Programming Faculty and member of the Golden PSZh team.