Artemii Zenkin, a Master’s student at ITMO University, and Anastasia Balabanova, a student of the St. Petersburg Stieglitz State Academy of Art and Design, have developed a design for a smart toothbrush capable of monitoring its owner’s health. The project brought its creators a win at the Russian national stage of the James Dyson Award competition. 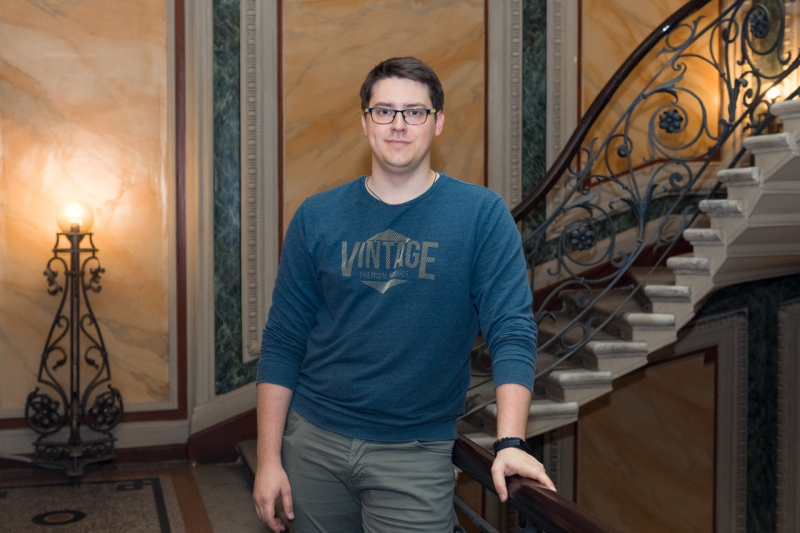 The results of the Russian national stage of the engineering and design competition James Dyson Award, which is supported by the household goods manufacturer Dyson, have been recently announced. Among the round’s winners are Artemii Zenkin and Anastasia Balabanova, participants from St. Petersburg.

Now, the project – a smart toothbrush that analyzes the composition of its owner’s breath and saliva to warn of health issues – will be presented at an international competition where its creators will compete for a grand prize of £30,000.

ITMO.NEWS met with Artemii Zenkin to learn more about the competition, his post-graduation plans, and what brings an engineer true joy.

First of all, congratulations on your win. What led you to take part in the competition?

It’s an interesting story. I’ve been working with ITMO University’s Infochemistry Scientific Center on various projects. Namely, we developed a potentiostat – a sensor device that detects signs of various illnesses, such as kidney stone disease.

One day, I get a call from [Infochemistry Scientific Center head] Ekaterina Skorb telling me about this young woman, Anastasia Balabanova, who needs help on a project. She’s a designer and needs someone with engineering knowledge. Anastasia wrote to me and told me about her idea – to put our potentiostat into an electric toothbrush. We got to work and made the device smaller so it would fit into a toothbrush.

When you first joined the project, were you expecting it to meet such a success?

To be honest, I was neutral about it – it seemed a competition like any other, and I didn’t know much about it yet. Besides, I had a lot of other work to do. We put together a team, made the project, submitted the application, and that was it. Then, Anastasia wrote to me saying the jury voted unanimously for our project.

I was very surprised even though the idea is indeed really cool – you simply brush your teeth while an embedded sensor analyzes your breath and saliva. The sensor connects to a device located in the handle. The data is analyzed and sent to your smartphone, which then notifies you if you should see a doctor – if, for instance, some health indicator has deviated from the norm.

How long did it take you to build the prototype?

I worked on it for about three months. It was busy work, with me working on blueprints and graphs. We had to combine Anastasia’s design with my engineering ideas. It can be a common issue – designers rarely think whether something will work when they develop a design; at the same time, engineers are rarely concerned with the ergonomic and aesthetic qualities of their work. We searched for compromises and we found them.

And what was the biggest difficulty for you?

The lack of time (laughs). Actually, most of my work had to do with taking this potentiostat, which is the size of a small cellphone, and removing the myriad of functions and modes that the toothbrush wouldn’t need so that it would fit into the handle.

There was another nuance: once we fit all the components into the frame, we realized we needed to put the motor somewhere, too. We were so focused on fitting the analyzing device in there that we kinda forgot that the toothbrush should brush, too. We had to design a gear system that converts rotation from one plane into another. But I believe we should keep working on it – the simpler the mechanism, the longer it’ll work.

In fact, it’s important to keep in mind that this isn’t even a prototype – it’s more of a mock-up. We’re now entering the assembly stage, during which we’ll sort out any drawbacks. But that’s why we have the second stage.

We’ve already met staff from Dyson who filmed and shot our application, which is already up on the competition’s website. As I understand it, ours and others’ applications will be reviewed by James Dyson himself. So it’s out of our hands now.

And what’s next for the invention itself?

We have to decide how we’ll use it. If we want to use this idea to tell the world about ourselves, then we’ve already accomplished that. We could also apply for an international patent, but that will take money and time.

At this time, we’ve signed a non-disclosure agreement with Dyson; they wanted a perpetual one, but we brought that down to 5 years. The invention will still be ours, but any commercialization of it can be done only with the company’s agreement.

On the other hand, I love the idea; if we were to take it further, we could work in improving our prototype, further reducing the size of the potentiostat, and switching from 3D printing to moulding with human-safe plastic. If James Dyson likes our idea, then we could use the prize money to start an R&D project in collaboration with the company – that’d be interesting. But it’ll take at least a year to hone our ideas. So we’ll see.

This isn’t your first competition as an ITMO student, or even your first win. What’s next for you?

I’ve just founded a laboratory and I’m assembling a team of some 20 to 30 people. We’ve got many competencies between us. Right now, we’re working with Motorika on prosthetics. It’s very interesting – we have a real task which will help many people who were left amputees. It makes you feel that you’re working on something bigger.

I enjoy designing all sorts of new things – when I’m asked to make something that’ll work. There’s no routine in it – you need to design it, then model it, assemble it, program, and make it look good. I enjoy every stage; today, I went to an industrial park for parts – that was interesting, too. Of course, the biggest pleasure of all is when a client sees the product and loves it.

But you shouldn’t just create something, tell people about it, and then abandon the project once the exhibition or competition is over. I try to use all our solutions in future projects.

So you haven’t considered joining a major company or a design bureau?

Right now that would be the last thing I’d do. I’m young, I have time, and I can afford to get some bruises. I’ll always have time to join a company. I even have some great offers in St. Petersburg and Moscow at the moment. But I’m not interested right now.

You’re essentially building a startup; what’s the hardest thing about that process?

I always want to get some sleep (laughs). Actually, the most difficult thing is talking to people. You have to establish work relationships and make sure that everyone does their tasks in time, because otherwise others will be held up. I’m reading books on management. If you can properly outline responsibilities between programmers, engineers, and testers, you can do a project quickly and easily.

Have you done that?

Not even once (laughs). But there have been less issues. Sometimes I throw away all the teamwork diagrams I’ve drawn up, grab a book, and start from scratch.

And where do you find your team members?

Right now, 90% of my team members are ITMO University students. I just come to class, take part in events, and talk to other students. It’s difficult with the first-years, as they don’t understand what they want yet; just like I didn’t when I was their age. You have to work with people a lot; if they grow into a great employee in a year or a year and a half, that’s already a win.

Are you going to look for a niche to specialize in or would you prefer to keep working on various tasks depending on the client?

Actually, I’ve always liked drones and I still do. I’d like my future work to be related to unmanned devices, but we have a number of regulations that make that difficult.

In time, I’d like to go into a specific industry and a specific field. But the world is dynamic and technologies shift in different directions – what’s trending today is not going to stay popular tomorrow. If you want to achieve something, you need to always stay on top of things.