In 2020, more than 2,900 students graduated from ITMO University; meanwhile, the traditional ITMO.LiVE event went online for the first time in its history. Even those who had already gone back to their hometowns and home countries enjoyed the chance to join the celebration. 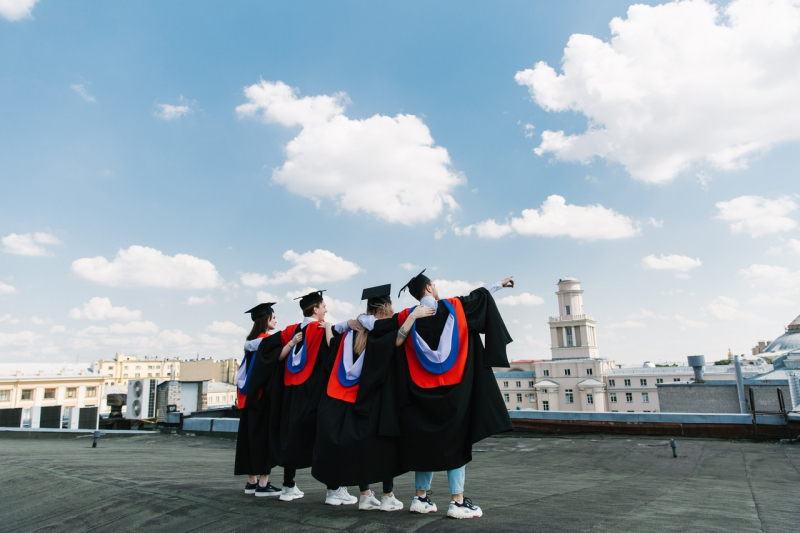 Staff of the student news organization Megabyte Media organized the event’s entertainment program: they recorded special episodes of the ASK ITMO show, featuring the heads of ITMO’s Schools and the First Vice Rector Daria Kozlova, in advance; shot a series of humorous ads with participants of intra-university comedy contests; and joined with ITMO.STUDENTS to tape clips for the “Battle of the Schools.” The university’s Creative and Corporate Projects Planning Center developed the general concept of the event.

The end result was a bright, dynamic, and – in keeping with the ITMO.FAMILY philosophy – very much home-like event.

The host Andrey Keks took a trip to the dacha of Igor Baranov, the dean of the School of Biotechnology and Cryogenic Systems, to try some of the host’s custom-recipe Charlotte cake and found out which projects Dr. Baranov is most proud of, how the School benefitted from its merger with the university, and what its students are up to these days.

Then, the host joined Anton Pyrkin, the head of the Faculty of Control Systems and Robotics, on the coast of the Gulf of Finland to cook up some shashlik and discuss the stereotypes that plague robots, scientific funding, and robotics production in Russia.

Anton Gopka, the dean of the Faculty of Technological Management and Innovations, shared his take on Georgian walnut salad and discussed what it’s like to be a financial expert at a tech university, how the faculty’s students set up startups as part of their studies, and the state of tech entrepreneurship in Russia.

Alexandr Kapitonov, the head of the Faculty of Infocommunication Technologies, talked about his path to science, switching from robotics to ICT, and the startups he’s involved in.

For the final part, ITMO University’s First Vice Rector Daria Kozlova was joined by Bogdan Petrov, the bartender and operations manager of Hard Rock Café St. Petersburg, who guided her in mixing an ITMO-themed cocktail specially invented for the graduation event.

The formal part of ITMO.LiVE began with an address from ITMO University’s Rector Vladimir Vasilyev, who reminded the graduates to keep their alma mater in their memories and to remember that they’d always be a part of the ITMO.Family.

“As students at ITMO, you collaborated with and worked alongside our professors and researchers. Together, you generated new knowledge, new products, new services, and new markets. You grew not only as professionals, but as individuals, too. And I believe that this foundation, this core you’ve acquired at ITMO University, will play a major part in your lives. You will be relevant not only as specialists, but as people, and you’ll continue to fulfill the potential that you hold. And even though you may no longer be students at ITMO, you will always be part of our large ITMO.Family,” emphasized Vladimir Vasilyev.

Notable ITMO alumni from all over the world sent in video messages in which they congratulated this year’s graduates. Among them are startup entrepreneurs and scientists from Germany, the Netherlands, the USA, the Czech Republic, and Bulgaria. Vladimir Eremin, team lead at Veeam Software and a graduate from the class of 2011 was joined by his colleagues at the company for a special video message.

“Today, it is completely normal to feel totally unsure about tomorrow. It’s absolutely okay to feel that everyone else has the solution to this life, and you don’t. But don’t stress about it or cling to the first available job opportunity. Breathe out and think about what it is you truly enjoy in life and will still enjoy in five or even ten years,” said Eremin.

Throughout the event, graduates competed for prizes provided by major partners such as HeadHunter, Coca-Cola, Baltika Breweries, BIOCAD, Sberbank, Veeam Software, Selectel, Speech Technologies Center, Wärtsilä, and EPAM Systems – and, naturally, by ITMO University itself. Participants were awarded points for participating in the livestream chat and a special ITMO-themed quiz. The choice of partners was anything but random, as these are all companies that already employ ITMO alumni and welcome this year’s graduates to apply for their job openings.

Another project that was specially developed for the ITMO.LiVE event was the Alumni’s Virtual Yearbook – a special ITMO-styled yearbook creation app. It’s already got themed sections and a special sticker pack, so all you’ve got to do is add your own pictures.

Handily, once the yearbook is done, graduates can have it printed by the university’s partner print shop OQ Copy Center and have a physical copy sent to their hometown, while a digital copy will remain available on their personal page. Even though the feature was launched for the class of 2020, the new tool is available to all ITMO graduates – and so is the printing discount.

The event culminated with a private Zoom party. The organizing team set up several quiz rooms, the Nostalgia Room where a newscaster read out news stories from the life of the university and its students, and the Tasting Room, where Megabyte Media editor-in-chief Alexey Itin and Strategic Initiatives Support Department head Andrey Zlenko spoke to graduates about their impressions and future plans.

According to Alexey Itin, the development of the event’s program and the shooting took only six weeks.

“We didn’t want to end up with just a mish-mash of on-stage student performances. We’ve already run a marathon styled as a “battle of the schools,” which our graduates are sure to remember. Setting things up with the heads of faculties and schools was quite easy: they were eager to join in and showed themselves from fascinating new perspectives, both professionally and personally. Our main goal was to preserve the spirit of celebration. I hope we’ve accomplished that,” he says.

According to the event’ organizing team, the main part of the event was watched concurrently by some 450 viewers; overall, the livestream was watched 130,000 times and accumulated 21.5 thousand comments.

This year’s graduates are also invited to join the class of 2021 in person next year at the Sibur Arena, where they’ll be once again celebrated in a special program.