Greg Tkachenko graduated with a Master's degree from ITMO University's Information Technologies and Programming Faculty in 2017, but he achieved his first professional successes while still a student. As a second-year student, Greg, along with a few other students of the Computer Technologies Department, was invited to take part in an internship at Yandex, where he spent almost two and a half years. Then, he received offers from Mail.ru Group and Facebook, which he turned down to work on the startup AI Factory, which he co-founded with Alexander Mashrabov and Victor Shaburov. In December 2019, the company was acquired by Snapchat’s parent company Snap for $166 million. Greg Tkachenko sat down for a chat with ITMO.NEWS and told us where to find ideas for your tech startup and how to deal with failure. 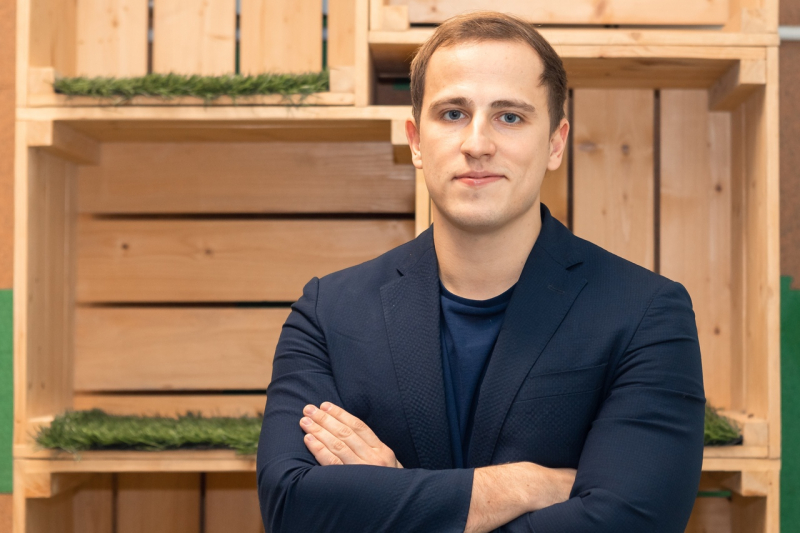 Tell us this: back in the day, what were your reasons for enrolling at ITMO University?

In seventh grade, I started taking part in computer science and programming competitions and had accumulated quite a track record by the time I graduated, including a winner’s certificate from the National Olympiad, which meant I could pick any university I wanted. My initial choices were ITMO University, St. Petersburg State University, and the Moscow Institute of Physics and Technology. The location played an important role, as I liked St. Petersburg and wanted to study here. Having decided on a city, I opted for ITMO University for its comfortable environment in which you can learn and grow professionally.

What do you remember from your student days?

To be honest, studying took up most of my time, so I rarely had any energy left for other things. It was my third or fourth year when I decided to change that; I entered a talent show as a juggler and got first place. Still, my most prominent memories are studies-related, for which I believe the credit goes to the University and its Computer Technologies Department, which cultivated an environment where you always want to learn more.

Looking back on it, what do you think the University has given you?

Firstly, the people who surrounded me. Being next to them, I wanted to keep learning, to grow and acquire new knowledge. Then there are the learning skills. The University has taught me how to learn, and that’s an important skill in today’s world. With the pace at which technologies are developing and professions are changing, it’s vital to absorb information quickly. Finally, it’s persistence. It was here that I learned not to give up and to treat failures and challenges with serenity: first in my studies, and then in other aspects of life, too.

What advice would you give to today’s students?

Be confident in your abilities and be persistent in what you do. As a rule, whether it’s work, a hobby, or business, nothing ever goes right the first time. Which is why you should learn to react calmly to delays and mistakes. Find the value in every experience and move on. I would also advise everyone to develop not only their hard skills, but their soft skills as well. In long-term development, how you communicate, present your ideas, and substantiate them matters just as much as your actual professional skills.

What was the beginning of your career?

My career began when I was a Bachelor’s student. In our second year, we had a mobile application development course taught by Yandex staff. Once it was over, a few of us, me included, were invited to do an internship at the company. I worked 10 hours a week at first, then 20, then a full workday, for almost two and a half years.

What did you think of that experience?

It was a positive one, for sure. It allowed me to understand the specifics of working in a large company, how everything is set up there, how the staff communicate among each other, how the different departments function. It was great, but my personal takeaway was that working with a large company isn’t necessarily the best option – it’s just that small companies and startups offer a different kind of advantage. So if you find yourself unable to get a job with Yandex or Google, it’s not because you’re a bad programmer, but because you have a different path to self-realization. Remember: safety is prison, freedom is risk.

And what did you do after you left Yandex?

In my final year, I began to consider my career options. I did some interviews and received job offers from Mail.ru Group and Facebook. I was just about ready to accept the latter; I even bought tickets to California and got my visa when an investor greenlit one of our ideas and offered to support our startup. My friends and I were excited at the prospect and so began the building of our first startup.

So you picked a startup, which hadn’t existed yet, over a job at Facebook?

This might sound like a strange decision, especially if you’ve heard all the talk about financial troubles in startups and seen the stats on how many of them fail in the first three years. Of course, it’s a wilder, less predictable world. But its beauty is that it lets you develop on a wider spectrum. At a large company, everyone has their narrow scope of responsibility; at a startup, you’re responsible for everything – finance, technology, strategy. To me, it was a more interesting and promising trajectory, even if it were not as simple as one would wish.

Did any of your plans fall through?

Of course. Our first four or five ideas ended in failure. At first, we worked on mobile search technology. We wanted a system more suitable for mobile platforms, one with more emphasis on media content such as video and pictures, something that would feel more native for smartphones. There were other ideas, too, but none of them worked out.

How did you handle that challenging time?

Yes, it definitely was challenging. I felt totally broken inside. Even though in my mind I kept reminding myself that every experience is beneficial, it was difficult to go against my own emotions, especially when I looked at my friends’ career paths. I wondered whether I made a mistake in not joining Facebook and if startups just weren’t my thing. Eventually though, I calmed myself and continued with my work.

So how did you and your colleagues find the right idea?

There’s a general approach for all business of this kind: take any recent conference, preferably one focused on machine learning or computer vision, and look at what people have come up with in terms of technologies and algorithms. Then, have your team consider how these tools and inventions could be packaged into a product. That’s what we did: we observed a computer vision conference and took note of an algorithm that animated faces in a way that it was difficult to discern whether this was a real or animated person. This became the basis of our startup AI Factory. One of our inventions was a feature that would turn selfies into short videos by applying various effects and stickers.

Late last year, the news emerged that your startup was acquired by the parent company of Snapchat. Did that happen before you launched your product?

Unfortunately, I cannot comment on the sale, but I’ll gladly share the development timeline of AI Factory. Here’s how it went down: first, we developed the technology and then put all our efforts in creating content. After that, we faced a choice: to pick the traditional development trajectory for apps of this kind, or go with another strategic maneuver. Here’s how it often works: first, a company blows up and becomes highly popular, then, as the consumers quickly get tired of its product, it goes into advertising, makes some money off that, and sells out to a major IT company once they’ve peaked. We decided to do it differently: we left the opportunity – and value – of entering the market for the first time to a bigger company.

Are you not involved with this project, then?

Not at all. We’re currently moving to the US where we’ll spend a few years developing and supporting this project.

And what do you plan to do next? Will you work on another startup?

I think so, yes. I’d like to create something travel-related, as that’s a major part of many people’s lives. I myself am a huge fan of these kinds of services, such as couchsurfing, for example. I’m not planning to step away from startups for now; I enjoy the thrill that you get with this kind of work. I believe that this feeling is the cure to professional burnout.

Find out more about Greg Tkachenko's professional career in this blog post by Anatoly Shalyto, a professor at ITMO University's Information Technologies and Programming Facult, in which he discusses the advantages of competition-related programming training and how it helps the Faculty's graduates to succeed not only as lab researchers and employees of tech giants, but as entrepreneurs, too.