What triggered the Big Bang? When will the first time machine appear? And what inspires scientists to keep pushing even after experiments fail? ITMO researchers and other guests did their best answering these and loads of other science-related questions during a 24-hour live stream at VK Fest. Here is how it went. 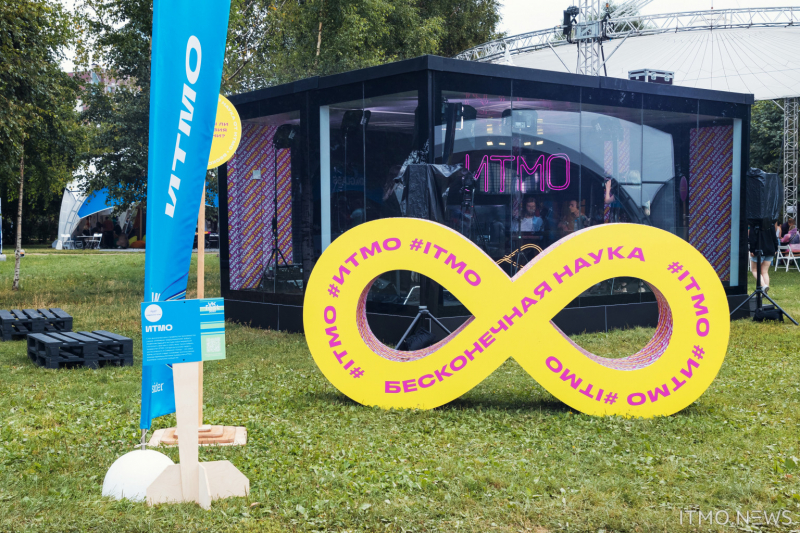 On June 23, at 3 PM, ITMO scientists broke into online with Endless Science, the longest science-focused live stream aired from VK Fest’s zone of science and innovation. The stream was live for as long as 24 hours, within which all listeners could enjoy the university’s researchers venting on about science, joking around, and handling trick questions online or in-person. The show organizers captured speakers’ and audience’s reactions with the help of seven cameras, whereas a team of seven tech specialists worked non-stop to ensure the quality of broadcasting even during nighttime. The university’s studio was not only one of the most fascinating zones at VK Fest, but also the only one operating all night long.

In 24 hours, the studio’s speakers received loads of questions from the show’s guests and viewers: how can one travel to other planets? When will scientists invent a time machine so that people could spend one weekend in two different places? Why is the universe infinite? And, finally, what is an average day of a researcher like? With this live stream, the event’s organizers aimed to show that science is not limited to the academic world but, in fact, is part of our everyday life.

Seventeen scientists gathered together at one studio to address questions that puzzled the minds of the audience. Among them were specialists in nanoelectronics, laser technologies, quantum cryptography, nanomedicine, information technology, programming, and accelerator and nanoparticle physics, including:

“I’m up for anything! Before this, I didn’t even know about VK Fest. A 24-hour live stream is an awesome idea, especially knowing that today people tend to communicate online more than in-person. I’d love to see such events become a thing and I think that next time, we can even dare to make it 48 hours of pure science. That’d be cool! I think everyone will agree that science is quite a challenge on its own and the same can be said about doing a scientific live stream,” says Stanislav Baturin, a senior researcher at ITMO’s School of Physics and Engineering and a laureate of ITMO Fellowship and Professorship Program.

The broadcast led by the university’s researchers featured eight public figures and bloggers who came to the studio to discuss a list of questions on their mind. For instance, Sergey Shteps, a viral actor and a director with over 1.3 million social media followers, did not understand how text messages can get to the other side of the world until a team from ITMO’s Faculty of Physics, namely, Vitaliy Shkoldin, Anastasiia Sokolova, and Oleksii Peltek, guided him through how Wi-Fi works.

“I enjoyed talking to people from other fields, and I’m sure to join in next time, too,” comments Sergey Shteps.

Moving from wireless technologies, the scientists together with Olympic gymnast Nikita Nagornyy had the chance to look into why smart assistants sometimes respond in a weird way. The answer is in the data that was used to train the device. If a robot lacks certain information or has no such word in its database, it cannot maintain a conversation properly.

“This was legit a great event! All the organizers and participants did a fantastic job. I think that it’s cool to even simply watch such events from the side but it’s definitely way better when you’re part of them,” adds Nikita Nagornyy.

Another guest of Endless Science was Milana Khametova, a 12-year-old blogger and model with 1.3 million social media followers, who broke into the modeling industry when she was three and has already walked the runway for various Russian clothing brands and even starred in a music video. Milana joined the studio to discuss the latest trends in education and learn more about specialized programs that will make it possible to change your grades in electronic gradebooks and menus at your school’s cafeteria.

“I enjoyed being here! Not only did I learn something new myself but also shared what I know about what’s hip today. I’ve never participated in anything like that before and I’d be happy to do it once again – I already have a few questions in store,” shares Milana Khametova.

The researchers also welcomed questions from Alexey Stolyarov, a fitness coach, winner of the Northwest Championship in bodybuilding, and a YouTube blogger (3.6 million subscribers), blogger Nasta Semga, who gained 8 million subscribers doing funny and dancing videos on TikTok, and Tatarka FM, a blogger who continues to shoot Vines even in her 50s, as well as tried to puzzle the world out along with Sergey Druzhko, an actor, a TV host, and a YouTube blogger (2.3 million subscribers) and Georgy Sokolov, a director at the forum Scholars Against Myths (the project Antropogenez.ru).

The first and foremost rule of Endless Science was to leave no question unanswered. In case a researcher had trouble answering this or that question, they could go for the phone-a-friend option or consult other specialists at the studio. For 24 hours, the researchers debunked scientific myths, exchanged their views, answered trick questions from other specialists, and shared the latest science news.

Apart from that, they also had the chance to take on a rapid fire question game Science Without Borders, compete with each other in mini games, and explain the science behind them. For example, in one of the games, participants were to pour water into a full glass one by one without spilling. The one who would be first to make the water overflow had to explain why it happened. As a result, ‪Anastasiia Sokolova from ITMO’s International Research and Educational Center for Physics of Nanostructures shared that water molecules bond with one another, creating surface tension, and just like a ball can support the weight of a light body. Yet as Anastasiia poured some water not in the center of the glass, like other participants, but on its edge, the film stopped holding back water and it spilled.

“I was thrilled to try something new. I was eager to learn whether I can handle questions from the audience or not. I recorded the stream together with two other scientists but if I did it on my own, I’d probably need a bit more time to think and figure out how to explain myself clearly. I think it'd be nice if we had such live streams more often. We could even open a studio in the university’s yard or a park near the main campus,” notes Anastasiia Sokolova.

Although the stream welcomed a rotating group of three – and new topics – every six hours, ‪Oleksii Peltek was lucky to stay on the air for eight hours uninterrupted, though that wasn’t the hardest thing to do, shares the researcher.

“I really liked the format of the event. We had a great team and fascinating questions from our viewers. In my opinion, the most difficult thing about such events is figuring out how to talk about scientific ideas in a clear, uncomplicated way. Hopefully, we did well,” comments ‪Oleksii Peltek.

Within 24 hours, ITMO scientists managed to answer 301 questions, that is, handling each hard question in about five minutes. Viewers on VK supported them day and night offering even more topics for discussion. All in all, the show received 700 comments and over 1.3 million views.

“This stream showed that people are the heart of ITMO University; after all, behind each grand invention or publication is an ordinary person, just like the rest of us. The university’s scientists answered 301 questions, had a good laugh with the viewers, and proved quite a few myths wrong. The chatty format we stuck to attracted not only other scientists but also non-professionals,” comments Marina Arkhipova, the organizer of Endless Science and a manager at ITMO’s Event Management Office.

However, the organizers aren’t going to stop on the achieved results and are already working on a new project.

“We want to collaborate with our scientists even more because they radiate an incredible charisma, a great sense of humor, and profound competence. A live stream or any other format, you’re to see new projects coming,” concludes Marina Arkhipova.