Last week ITMO University and the University of Applied Sciences of Western Switzerland conducted a short-term exchange involving 30 students from Switzerland and Russia. The students discussed and collaborated on various practices related to social entrepreneurship. ITMO’s Social Design and Entrepreneurship Center organized the exchange as part of a program for international youth exchange in social services. ITMO.NEWS describes the projects developed by the teams over four days of working together. 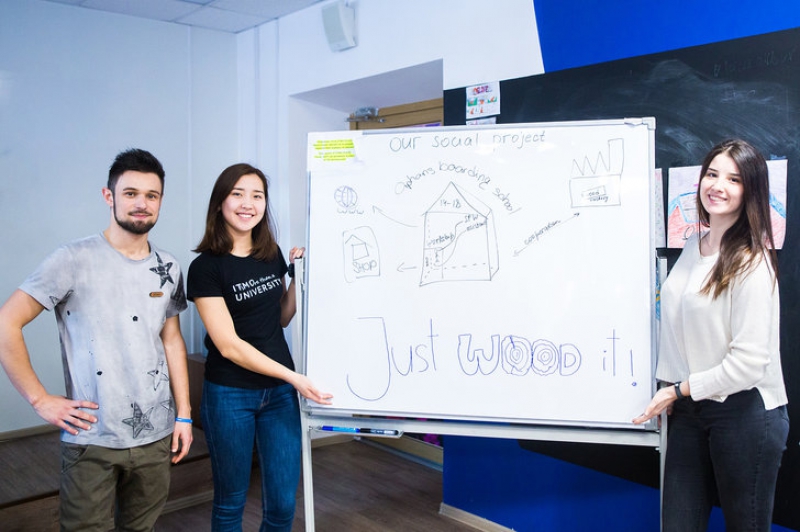 University of Applied Sciences of Western Switzerland is one of ITMO University’s partner universities. Experts from the Swiss university had previously come to St. Petersburg to assess Russian social entrepreneurship projects; this time, they brought with them 15 students from Switzerland. The exchange program entails an exchange of social entrepreneurship practices between the two countries. Over the course of four days, the students got to know each other, exchanged experience and formed teams to develop “mini-projects”.

“The Swiss students are better at some things, and the Russians – at others, and these differences are benefitial for collaboration. We gave them some specific issues to tackle together. Some of the young people who came here from Switzerland aren’t actually native Swiss – some of them came there to study and were also able to tell us how their home countries combat the issues in question. One of them, for example, told us how the French social entrepreneurship system functions and what social groups they try to help. This intensive course is but a part of our youth exchange program; we work with students from other countries, too. We help our students find new friends and partners, to learn how volunteer and charity work is done abroad, as well as how they can solve social issues on a local scale,” – explains Andrey Zlenko, head of the Social Design and Entrepreneurship Center at ITMO University.

The Russian side was represented by students from various educational programs who are all participants in the program “People Need You!” which helps develop socially-oriented projects.

“This collaboration began about three years ago at a social entrepreneurship festival, where I first met my colleagues from ITMO University. This is the first time for us when we’re working with both Russian and Swiss students at the same time. I noted that Russian students tend to focus on the various aspects of each issue, while Swiss students prefer to look at the problem in general. Sometimes it was hard for them to work together as they didn’t understand each other. We plan to host more events in this vein, as it’s important that we work to solve social issues together,” – said Benoit Renevey, curator of the program and a professor at the West Switzerland University of Applied Sciences.

Promoting tolerance towards people with disabilities

This project aims to help people with disabilities, and more precisely – those with hearing disabilities. Its goal is to increase the level of tolerance towards these people and show others what kind of issues they might encounter in daily life. The students helped people experience the life of someone who is unable to hear – they believe that this is the way to inspire compassion and empathy towards those who are different.

“We have this idea of a house for hearing-impaired people, but it’s not actually intended for those who can’t hear. We have several locations in there with different activities, all designed to show the issues that deaf people have. For instance, there’s one room where people can listen to music using vibrations; another room is a theater where you’d watch short plays based on gestures and mimics. One other idea is a café where visitors have to make orders without being able to talk or hear. We believe that experiencing these things will help form tolerant attitudes towards hearing-impaired people,” – explains team member Anastasia Volkova, a student at the Faculty of Technological Management and Innovations.


“There’s no existing infrastructure today that would let the society engage with this social group. We want people with disabilities to be heard. The situation differs from country to country, but, for example, in Switzerland, which is seen as a safe, successful country, there is no infrastructure for these people. Sure, there are some associations that help them, but they are still having difficulty integrating into the everyday life of ordinary citizens, because people don’t understand their pain,” – comment Jérémie Theurillat и Céline Berthouzoz.

Authors of this project want senior citizens to feel needed, protected and comfortable. One of the project’s core ideas is to create a space where the elderly can talk to the younger generations and share their experience. One idea the students focused on is a kitchen where members of different generations can cook together.

“We have a well-develop support infrastructure for the elderly in Switzerland: there are events that are aimed specifically at that age category, but the problem is that they are mostly very similar and people soon lose interest. I think it’ll be easier for us to create and organize one of the ideas we developed here because our country and its towns are smaller than what you have in Russia. For example, St. Petersburg is a massive city and launching a project like this here would require a lot of effort and preparation. In Switzerland there are a lot more places where the young and the elderly can meet – we all go to the same spots, the same cafes,” – explains Tamara Lotta.

Members of this project tried to combat cyber-bullying among school students. They had examined statistics and found that Russia is in the global top-5 in terms of its rate of cyber-bullying.

“We polled the many schoolchildren who come to ITMO University. We were already aware that this is an issue in Russia, but we also wanted to know what the children themselves think of it and how they would fight it. It turned out that they are more in favor of discussing and resolving those conflicts between themselves without bringing adults into the conversation. Solutions on this topic usually involve websites and promoting conversation, and with our project we want to create a platform where victims of cyber-bullying can talk to each other, share their worries and think about how they can solve them,” – says Ilya Lyamkin, a student at the Faculty of Control Systems and Robotics.


“I think cyber-bullying exists everywhere, and Switzerland is no exception. I’m also participating in a similar project at my university. In our country, the way this problem is addressed is that we have social workers who help children if they encounter any issues. We came up with an application that will not only target those who suffer from cyber-bullying, but also the cyber-bullies themselves, because this topic requires a complex approach and we have to work with the both sides. People become bullies because they have issues of their own, and they need help, too,” – explains Vanessa Alejos.

This project’s goal is to provide a partial solution to the issue of providing employment to those who grew up in or still reside in orphanages. The students decided to conduct work inside the institutions and teach the children about woodworking and how to create objects they can sell.

“We know that it’s hard for orphans to find their place in life and get employed after they’ve reached adulthood, as their education level tends to be fairly low. Our solution is to teach them to create various wood objects and sell them. People can order the products on which various words of inspiration are engraved. We plan to start with spoons and mobile phone cases, which are things that nearly everyone uses. To make this happen we need to hire a specialist woodworker who can teach the kids to use the various tools. We’ll also need someone to curate the working process. To sell the objects, they’ll also need a website; we plan to set up small shops at the children’s homes, as well. We’d like to cooperate with factories that process wood, as they often have various scrap material we can make great use of,” – explains team member Zirek Dunabaeva, a student at the Faculty of Control Systems and Robotics.