The winter school "It’s Your Call!" 2020, jointly organized by ITMO University and Sberbank is over. Five days of lectures, workshops and teamwork under the leadership of a mentor allowed each of the eighteen teams to complete their own project and defend it as a short presentation. Top six projects made it to the finals, while the winning team received not only the opportunity to enter ITMO University without having to pass the entrance exam, but also valuable gifts – electric scooters. 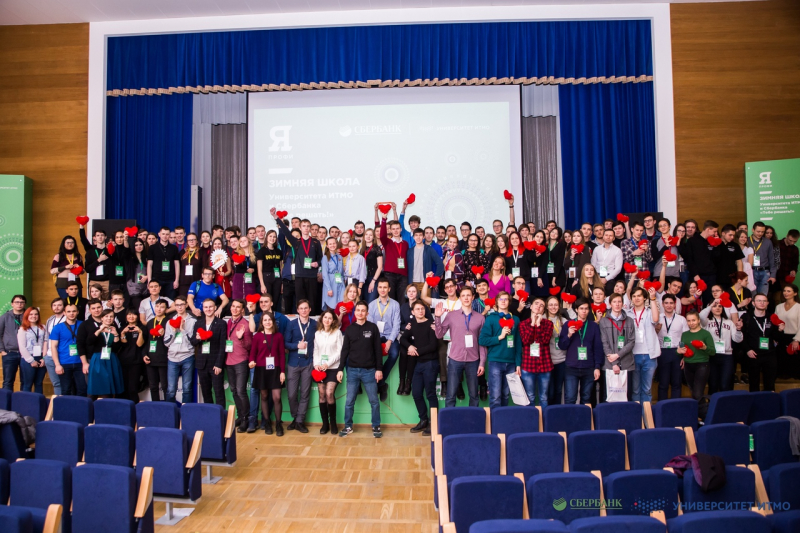 Participants of the winter school

Six teams that have prepared the best – according to the mentors – projects have made it to the finals. Each project corresponds with one of the topics that were suggested in the beginning: “Coronavirus Plague Inc”, “Swarm Robots”, “We Want to Live on Clean Earth”, “Museum of 21st Century”, “Let’s Take Out the Space Garbage”, “Working Hard All Our Lives”.

In the finals, participants had to present their project, along with its advantages and possible applications, during a 4-minute pitch. The top three winners were chosen by other participants of the winter school. One of the teams was also noted by the mentors and awarded separately.

The third place was taken by the team with the project Paperversity. Members of this team have brought up a relevant subject. Students and teachers use a lot of paper in order to print out documents, term papers, theses and other paperwork. The university spends a lot of money on paper, while students have to waste their money on printing services. Then the university has to deliver waste paper to the recycling plants, where it gets processed, sent to the shops and bought by the university only to repeat this cycle again and again. This way of dealing with paper is unprofitable, not eco-friendly and counterproductive. Instead, the students have suggested arranging a recycling center right here at the University. Paper can be cleaned of ink by means of simplified and more eco-friendly technology and then re-used.

The second place was taken by the team who developed a prototype for compact robots that are able to look for people underneath rubble. According to statistics, 260 cases of building collapses have occurred in Russia last year. The biggest one was the explosion of a residential building in Magnitogorsk when 54 people were injured. Rescue efforts have taken four long days. It’s problematic to look for people in such cases due to difficult conditions, large search areas and inadequacy of equipment that is available to the emergency services. That’s why the students came up with the idea to create autonomous small-sized robots equipped with various sensors: radar, infrared sensor, air analyzer, microphone and video camera. This would provide a complex approach to the search process. Swarm robots of that kind can rescue people much faster thanks to well-coordinated functioning and constant communication with each other, the server and the rescue station.

The project GlassArt, which aims to help people understand art better, was chosen as the winner. A survey conducted among visitors of the Pushkin State Museum of Fine Arts in 2019 has shown that people feel the lack of VR/AR technologies and virtual assistants. The members of GlassArt team have combined these two needs and suggested creating augmented reality headsets. Firstly, they would draw the user's attention to certain elements of the pictures and show an explanatory curatorial text. Secondly, they would also bring some pictures to life with the help of neural networks. The main mission of the project is not only to increase interest in museums and art in general, but also to develop Russian VR/AR technologies. Such technology could replace traditional museum audio guides and mobile apps as it is more convenient and interactive.

According to the members of the winning team, they will remember the winter school at ITMO University for its atmosphere as well as for the classes where they could improve their presentation-making skills.

“The main thing that they taught us to do is to make presentations and prepare speeches. It’s very useful. One of the most important skills is the ability to talk and to present yourself. We have spent the whole day learning to do that, plus the entire course was basically dedicated to teaching us how to present ourselves, our products and our solutions. I’m sure this will often come in handy in the future,” says Ilya Ilyashenko from Barnaul, a participant of the Big Data track.

“Of course, it feels fantastic to win, emotions are running high. We all have been dreaming about it and trying to come up with ways to achieve it. The school has left a very positive impression, we loved everything here. The organizing is very good,” notes winning team’s speaker Evgeny Rozanov from St. Petersburg, a participant of the  Robotics track.

The team of the project (Not)Smart Satellite have received special attention as it was noted by the mentors. At this point, about 15 thousand satellites orbit the Earth. In four years, this figure will double. All of them not only clog outer space as it is, but also constantly break down, explode, go out of the order and lose their parts. The students have proposed a smart module to be mounted on the satellite before its launch. During the satellite’s operation period it can collect and analyze the information about satellite’s functionality and general condition and predict its possible date of breakdown. The module can also automatically dispose of the broken satellite. This project is quite doable, promising and there are no direct competitors.

In conclusion, the Regional Director of Sberbank’s Technology Track Aleksander Zakhozhy congratulated all the participants and finalists.

“I have the honor of presenting Sberbank’s Technology track. This block is responsible for the development, implementation and coordination of the bank’s many innovative solutions. There are 35 thousand people on our team, 12 thousand of whom are developers. In St. Petersburg there are two thousand employees and their numbers grow. Our goal is to become one of the best tech and financial companies in the world,” he says. “I congratulate all the winners and all the participants. This is one of the cases where it’s not that important to win. It’s more important to just be here, in this atmosphere, to get to know each other and to present absolutely mad projects – the madder they are, the more fascinating it actually is.”