Khalil Ibrahim from Syria is an international student at ITMO and is currently enrolled in a one-year Russian language foundation program before pursuing a Master’s degree in information security. He is a true Madridista at heart and in this conversation he shared with us his love for football and his favorite team. Read along to learn more about his life in St. Pete and his plans for Christmas and New Year. 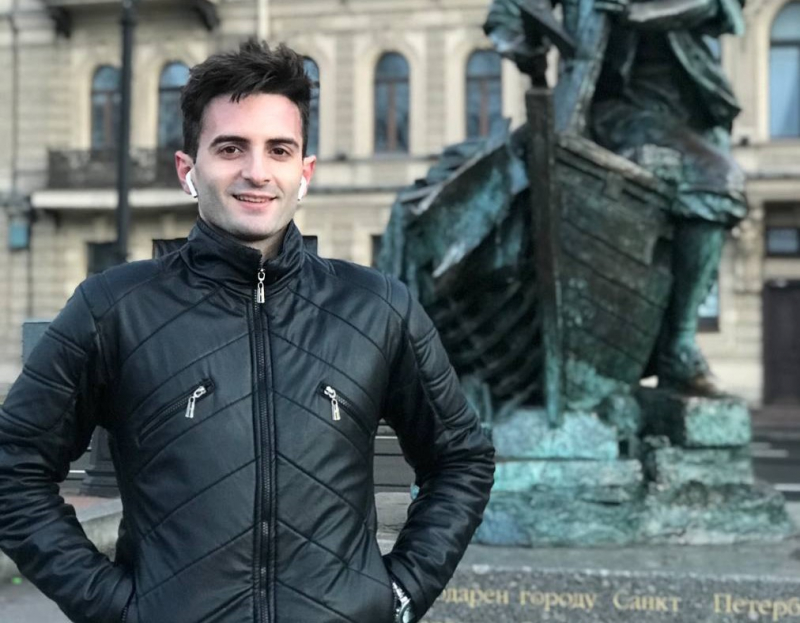 I am doing a foundation course at ITMO where I am learning the Russian language and different facts about Russian culture. It is a one-year course. After that, I will pursue a two-year Master’s degree in information security.

Did you know some Russian before coming here?

Not much but I started learning the language some months prior. I used to watch a lot of videos in Russian. It is always an advantage to know the language when you are traveling to a new country. Russian is not so easy but the basics can be learned with little effort.

What was moving to a different country like for you?

This is the first year I have traveled outside Syria. It is a pretty amazing feeling. When you travel abroad, you get to meet new people, get acquainted with new cultures and new languages. Of course, I do miss my country, my people, and my friends but the experience is worthwhile.

How did you find out about ITMO?

A friend recommended it to me. He introduced me to the Russian scholarships website. I was really impressed by ITMO and its programs. ITMO’s consecutive wins in the ICPC competitions made me fall in love with it as I am very interested in computers.

Why do you want to study information security?

I want to study it because it is the language of the century. Data and information are all around the world and there is a big need to make it secure from hackers. New strategies for protecting data are the need of the hour. Often we come across incidents of WhatsApp or Instagram getting hacked even when they have a team of highly-trained experts managing them. Thus, information security is a subject that needs to be developed a lot in the near future and it is one of the reasons why I am so much interested in studying it.

What programming languages do you know?

I usually deal with web development languages such as HTML CSS, PHP, and JavaScript. I am also quite adept in database management. I use SQL a lot in my work. Currently, I am also learning Python because it is a very versatile language. I also know a few object-oriented programming languages such as C++ and C#.

How did you prepare yourself for the winter?

My friends who live in Russia warned me about the extremely cold climate here. They advised me to bring a number of jackets and coats with me. But I did not take them too seriously. When I landed at the airport, the cold wind hit me hard! It was freezing. I had to buy a few coats and jackets immediately. The climate here in St. Petersburg is very different from what I had experienced in Syria. But I think I am getting accustomed to it gradually.

I live in the dormitory located on Lensoveta Street 23. It is a very beautiful and cozy dorm. The temperature is very well maintained inside the building. I don’t even need to wear a sweater indoors.

What do you think about Russian food?

Russian food is very different from Syrian food. At first, I used to cook my own meals. But it took a lot of time. Cooking a meal involves so much preparation. Sometimes, it becomes a little bit too overwhelming. Also, you need to wash the utensils afterward. Therefore, nowadays I usually depend upon prepared food.

Do you have any favorite Russian dishes yet?

Yes, I do. I really like plov, it is quite similar to Syrian cuisine. I also like Russian yoghurt. It is very delicious.

What are your plans for Christmas and New Year?

My roommate and I have been really busy this week decorating our room. We bought a lot of fairy lights and small trees. I have to say our room looks really unique now. It is the center of attention for passersby.

I also have some plans for celebrating New Year in the Russian style this time. My roommate and I will try some special Russian food and visit some new places.

How do you celebrate Christmas and New Year in Syria?

Quite similar to Russia, we also decorate our houses with lights and trees. We exchange gifts with friends and families. We also follow the tradition of Santa Claus distributing gifts to the good kids. We also play Secret Santa. The streets are decorated with lights. The air is filled with festive cheer. It is one of the most enjoyable times of the year.

Do you have any special Syrian dishes associated with New Year?

Oh yes, we make a special dish on the occasion of New Year which is very authentic to the Middle East. It is called Kibbeh. Sometimes it is also regarded as the national dish of Syria. My family makes it with rice, meat, vegetables, and nuts. We also make special salads on this day for the grand feast.

Are you into sports?

Yes, I am a football player. I have been playing football since a very young age. I have played for my school and university, representing them at national levels. Playing for the football team at ITMO is my goal for now.

Which is your favorite football team?

I love Real Madrid, so I am a proud Madridista. However, I really like the Italian national team, too. I have been admiring them for a very long time. I was in seventh heaven when they lifted the UEFA Euro 2020 title.

Who is your favorite footballer?

Francesco Totti is my idol. His dedication and loyalty to Italian football and to AS Roma is unparalleled. I love that sort of loyalty. Also, his football skills are insane. I have learned football from watching him.

Who are your favorite Real Madrid players and managers of all time?

It is very difficult to choose one because this club has had so many legends over the years. My all-time favorite players would be Raul Gonzalez and Cristiano Ronaldo. From the current squad, I really like Karim Benzema and Toni Kroos.

As for managers, I really admire Zinedine Zidane. He won three consecutive Champions League titles. So, that is a testament to his brilliance. I also like Carlo Ancelloti a lot. He treats the players very well. I really appreciate his humbleness.

Have you considered joining ITMO Kronbars – the university sports club?

Yes, I have heard about them. Unfortunately, I did not get the chance to get in touch with them yet. But I am looking forward to joining them as a footballer. It will be amazing to contribute to ITMO in the field of sports as well.