The ITMO.STARS contest (application deadline: July 25) allows talented applicants to enroll at ITMO University regardless of their Unified State Exam scores. This initiative was launched five years ago and since then, several dozen gifted applicants submitted their projects and used them to enter the university. Last year, 19 students became finalists of the contest. In this story, some of them describe what they’ve managed to achieve since then. 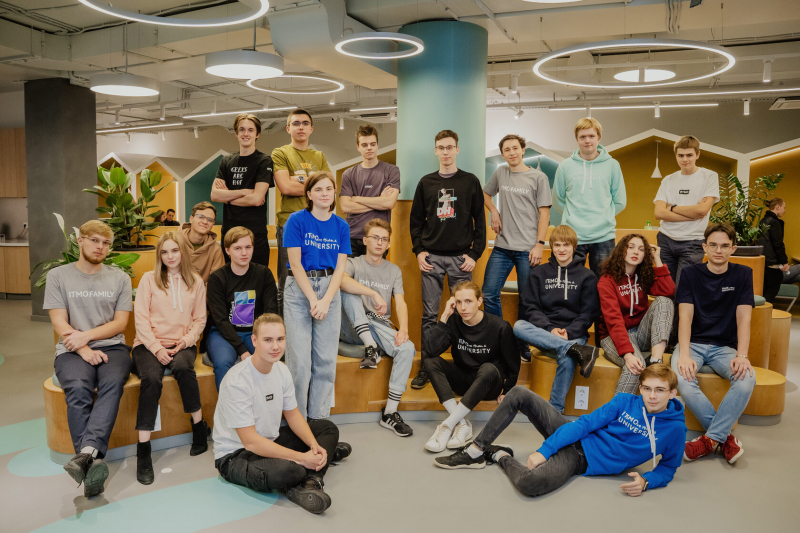 Life at ITMO University is very busy. For example, I prepared samples using the laser-induced microplasma (LIMP) method and took part in the Photonics 2022 exhibition, as well as presented research on the production of microlenses at the international symposium FLAMN-2022. Beyond physics, I also became interested in many other interdisciplinary fields. At the eighth SCAMT Workshop Week I was engaged in inkjet printing of functional materials. My team and I also made it to the finals of the blockchain competition Phystech Business Solutions. In the future, I plan to continue doing science, develop the application of laser plasma in physics, and get a postdoctoral degree.

In my first year of studies, I became a member of the Vdokhnovitely (Inspirers) movement and Znanie (Knowledge) society, so I give popular science lectures for school students. I also took part in the Skolkovo Foundation’s GreenTech StartUp Booster – our team made it to the finals and although we didn’t win, I still think it’s a valuable experience. I tried my hand at developing new types of microscopy at the instrumentation lab. It’s related to the project for express assessment of antibiotic resistance in bacteria, thanks to which I enrolled at ITMO University. In the future I’d like to do research at Infochemistry Scientific Center’s and SCAMT labs.

I’ve recently started to work as a technician at an ITMO lab, where Ivan Smirnov, another ITMO.STARS winner, and I are engaged in an exoskeleton for hiking – it allows users to carry heavy objects such as a camping tent more easily. Another project I’m involved in is an exoskeleton with AR glasses. I’ll use a transparent OLED display for it, so that a person could see the actual reality with images augmenting it. In the future, I hope to place it on the market. I’d like to thank Sergey Kolyubin and Konstantin Nuzhdin from the Faculty of Control Systems and Robotics, as well as Nikolay Pshenichnyi from the Scouting and Career Guidance Office, and other ITMO employees for helping me and seeing my potential.

In the beginning of this academic year, Leonid Nagornyi and I were offered a place at one of ITMO’s labs and work on our exoskeletons. By December, I was ready to present one of them at the Congress for Young Scientists and Sirius University of Science and Technology. I plan to develop the third version of the exoskeleton using 3D printing. It feels great that I’ve worked on this project myself and other people are interested in it. I was also invited to join a Master’s program at Sirius.

I can’t even describe how happy I am that I entered ITMO. It’s really different from what I expected: I thought I won’t get to do much other than studying and sleeping but in this university, you can become anyone if you try, and there are lots of opportunities for this, especially in terms of employment. For example, I successfully completed an internship and now work as a full-time developer at a company where I do 3D modeling and laser scanning for architectural measurement of buildings. I really like it, and I want to develop further in this field. At the same time, I’m forming a team and working on ideas for participation in the ITMO Accelerator.

During my studies, I’ve reimagined my music streaming service PewPee a bit and decided to develop it using blockchain technologies. Music streaming services like Spotify typically use centralized servers, so it’s easy to block any content, while blockchain technologies allow artists to express themselves more freely and fans will be able to support them directly. I think that the music industry should move to Web 3.0 and I would like to be one of the first ones to start a revolution in this field. I’d also like to create an Android app and present my service at international conferences.

At ITMO, I met many motivated people who already have their own startups, for example, Daniil Taiakin and his PewPee. My classmate Bogdan Mitursky, who successfully combines an internship at VK and studies, inspired me to apply to this company, too, and I was hired as a front-end developer. This summer I’m working on the messaging system, but I plan to stay at VK for a longer time. VK gave my KotBread team 500,000 rubles of grant money for the development of a mini game. Now I will focus on learning about algorithms and growing into a multi-stakeholder developer, and then I will either start my own startup or join PewPee.

The way my classmates and I communicate surprised me in a good way: unlike in school, everyone’s more friendly and ready to help. My skills in cybersecurity have also improved. I managed to participate in the educational program “Financial cybersecurity” at Sirius University. After the lectures, we as a team monitored hacker attacks on the banking infrastructure in the information security monitoring center. And now I’m conducting a study of the security of the Burger King application and I plan to do an internship at Yandex or Dr. Web as an information security specialist.

During the first year, I found friends who are interested in the same things as me and who are determined to work on startups. For example, now my team and I are developing a decentralized password manager. Its advantage is that you won’t lose your passwords even if the server that stores them will go down. Therefore, we plan to continue developing this project as a startup. I also created a search engine for Lex Fridman’s podcasts. It can find any keyword and locate at what point it was said. I also continue to develop my English dictionary project: I have already made a website and written the server part. It’s great that I mastered a new technology stack and created something on my own.

Over this year, I’ve formed a team and we completed a testing project to see how well we work together. It was a mobile 3D game with bread as the main character. It had to move from point A to point B in the kitchen and take revenge on cats along the way by ruining their beds with jam. During the summer, we plan to develop a new puzzle game, as part of which the player should help a cube become a sphere. I will manage the developers and help with programming and graphics.

I’m only starting so my achievements lie ahead. For now, I’ve formed a team and we started to develop a 2D fighting game. Another student and I will work on the code and do the graphics, while my friends from Moscow State University will come up with a story. I plan to work on this project more and find another Junior or Middle Developer.

I like studying at ITMO and its structure. On one hand, I have a lot of free time but I also choose to study a lot during it to excel. Over this year, I’ve changed my priorities: initially, I was interested in machine learning and data science, whereas now I’m more into backend development and came up with several app ideas. But before I get to them, I’d like to work at a company and see how it goes, so I’m looking for an internship right now.

At ITMO, I continued to develop the project with which I applied to ITMO.STARS – a robot artist. Last academic year, our team received a grant from ITMO for its development. Another project that I want to implement is a tool for perfect notes. Different people require different amounts of time to understand certain information. Therefore, it would be great to come up with a system that evaluates how quickly a student reads a text, and if they don’t understand something straight away and reread it all over again, the system would offer them a different explanation.

In addition to programming languages, I began to study artificial intelligence and got a job as an intern at a company. But right now, I’m still looking for something I would like to do, so I would like to get a job after the internship first, and then think about what I can do on my own. For example, I’m considering launching an online store selling rare medicines.

In my first year, I decided to focus on adapting to the university and the opportunities it offers. Therefore, I participated in the MB School in journalism, and now I work as a junior editor and journalist at the Megabyte newspaper and NewTone magazine. It was also very great to pass the Science Media hackathon on data journalism and design, although my team and I didn’t take first place. I decided that just studying isn’t enough for me and went through the school of adapters to help first-years students. In the future, I plan to improve my Figma and Photoshop skills to become a more confident designer and exhibit a joint project with a photographer on how people are connected to each other in terms of string theory.

To apply for this year’s ITMO.STARS contest, you need to submit an achievement of yours, such as a program, a device, a study, a project, and so on, as well as gain minimal Unified State Exam points. The winners are able to study at their Bachelor’s program of choice for free. The applications are accepted until July 25, 5:59 pm. The results will be announced on August 1. You can learn more about the contest here, as well as ask questions on VK or Telegram.