In late December, the students of ITMO’s Faculty of Physics and Engineering were first to try the new format of project defense aimed not only to expand their knowledge of the subject but also to train their presentation and teamwork skills. 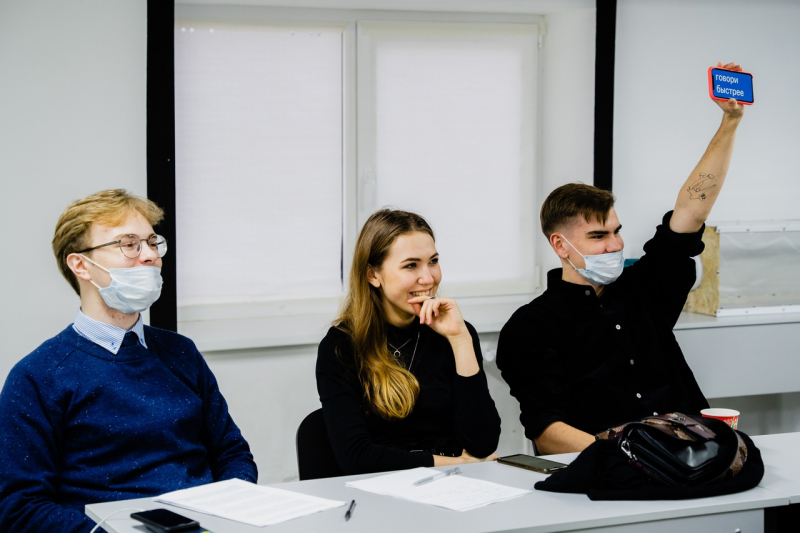 The Faculty of Physics and Engineering students at their project defense

Modern science is rapidly developing, and scientists have to face multiple challenges when trying to make discoveries on their own. The complexity of equipment, the work pace, and the scope of challenges require teamwork. That’s why ITMO University now focuses not only on teaching fundamental knowledge but also soft skills. This allows students to quickly adapt and better understand each other and their future colleagues.

This year, the Faculty of Physics and Engineering decided to experiment: traditional semester projects were united with soft skills classes. This way, students saw soft skills not as an extra course but as an essential part of their professional training.

“We’ve always tried to add project activities in our Bachelor’s programs,” explains Yana Muzychenko, the deputy dean of ITMO’s Faculty of Physics and Engineering. “We see project activities combined with classical classes as an extremely effective way of teaching. The combination of soft skills and physics projects is a great example of interdisciplinary interaction. Not only supervisors but also soft skills professors helped our students in their projects. Thus, students had the chance to do their research on general physics and simultaneously improve their time management, team building, and other crucial soft skills. As a result, they will also earn credits in both disciplines.”

According to Valeria Limonova, an ITMO soft skills instructor who supervised the experiment, the focus was on the development of students’ personal effectiveness and skills in time management, goal setting, teamwork, and task delegation.

“It was a very interesting experience because our students could apply the tools we suggested for them right on spot and give us feedback,” she notes. “As a professor, I enjoyed listening to students and learning more about what problems they face, whether they plan to continue work in teams, and how their projects are coming along. The main thing is that students will carry on with their project activities in the next semesters, too. So, this will also be useful for their future work.”

ITMO.NEWS met with students who successfully completed the course to learn more about their projects and thoughts on the importance of soft skills in teamwork.

Our project was devoted to the tennis racket theorem, also referred to as the Dzhanibekov effect. This effect is a consequence of the laws of classical rigid body mechanics. It is based on the statement about the instability of the rotation of a body around an intermediate axis. This is best exemplified in space. This effect was, in fact, named after the Russian cosmonaut Vladimir Dzhanibekov. In short, if the body rotates around a principal inertia axis for a certain period, it will begin to turn 180 degrees about the other (intermediate) axis of inertia.

The greatest challenge we faced during work is a demonstration of this effect. It had to be a body with different moments of inertia relative to the principal axes and also somehow placed in a levitating state. We could not use tossing because it is time-consuming and provides a very imprecise demonstration of the effect.

We decided to use a foil bearing, but it requires a sphere, otherwise, the airflow will support the body unevenly and the effect will not work. Then we ran into another problem: we had to figure out how to create a perfectly smooth ball with different moments of inertia. The 3D printer failed this task. Nevertheless, we found our best choice – workpieces for holiday tree decorations. These are hollow inside yet smooth outside. By dividing the insides of them into sections and filling them with paraffin wax/clay, we reached the desired effect.

Thanks to this project, we acquired useful experience both in teamwork and research. The soft skills course helped us to become a team and effectively delegate tasks so that everyone would be satisfied. During classes, we learned handy tips for working in a team and managing our time. Then, we could use this knowledge in our project. We became a tight-knit group, and it helped us achieve great results.

Our team decided to take hydrodynamics for our project, although the second-year students tried to talk us out of this idea. We settled on the Magnus and Venturi effects – these are quite simple phenomena, but our goal was to make this topic interesting.

We had to figure out how to observe these effects. So, our first challenge was to put the equipment together. There were many funny stories with this: we stayed at the university till midnight, our installation leaked and sort of flooded the building for a week, we got scolded by guards because we spent the night at university, and our colleagues activated a fire alarm during their experiments and got scolded, too, – let alone other work moments. It is definitely an experience to remember!

Even before the start of the course, we delegated the key tasks among the participants and tried to adhere to this strategy. But the course’s schedule got in our way, and we constantly failed to meet deadlines, even though we mainly focused on the project. We skipped the public speaking class, but the personal effectiveness class was helpful.

This class lets students acquire skills which will be handy in working in new teams and building their future career. It will be especially useful for socially-awkward people, too.

Our project has the most memorable and simple title among others – Gurgling Bottles. We investigated vibrations in gurgling bottles. There is nothing complicated here, just bottles.

We aimed to study coupled oscillators, that is, the interaction between oscillatory systems, using the example of bottles. This is an important topic as vibrations are everywhere: the flickering of fireflies, applause in theaters, or the heartbeat of ducks flying in a single wedge.

The most exciting part was, of course, the experiment. It looked comical: we looked like miners after a long day of work, there was black water dripping into a bucket, and it all was on the tape. It was funny to begin to discuss the defense just a couple of days before it happened. After the discussion, we were all tired and started joking around.

We enjoyed this project, and the soft skills classes helped us a lot, but I wish they occurred earlier and we would learn more about public speaking.

We studied vibrations of a circular membrane using a drumhead as an example. This work required not only physics but also good teamwork because, without clear and well-coordinated steps, this rather big project would simply not have met the deadline.

To make our interaction most effective, I decided to take over the organizational part and tried to make our joint work accurate and structured. Here, soft skills helped us find a perfect system for joint research. Thanks to this class, we managed not only to complete the project but also had a good time and acquired useful experience.

Hard skills included theory, practice, modeling, and analysis of the results obtained with further readjustment. This is a simple recipe for preparing our project, which we followed in the course of research.

We continue to work on our project even after the defense. The process of the studied effect is quite simple: when the membrane is hit, the impact point shits and entails the entire membrane. This leads to a primary deformation and causes a traveling wave to begin to propagate from the impact point. The further faded vibrations of the membrane, as well as its rest and impact parameters, determine the nature of this wave.

While working on the project, there were many funny and sometimes even ridiculous moments. So, for example, when we first launched the 3D model, showing the curvature of the membrane surface upon impact, we saw a face in it pretty clearly – it was both funny and scary. This project gave us countless wonderful stories, as well as invaluable experience of teamwork on a real scientific problem.