BIOCAD VP Roman Ivanov: “Biotechnologies are the Cornerstone of Medicine of Tomorrow”

Roman Ivanov, the Vice President of BIOCAD, had once returned to Russia from the Netherlands and has spent ten years in charge of R&D and international relations for the top company on the Russian biotechnology market. During an open lecture at ITMO University’s Biochemistry Cluster, he discussed Russian science, prospects of world-class R&D at the nation’s companies and what students need to know about starting a career in hi-tech. Below are excerpts from his lecture: 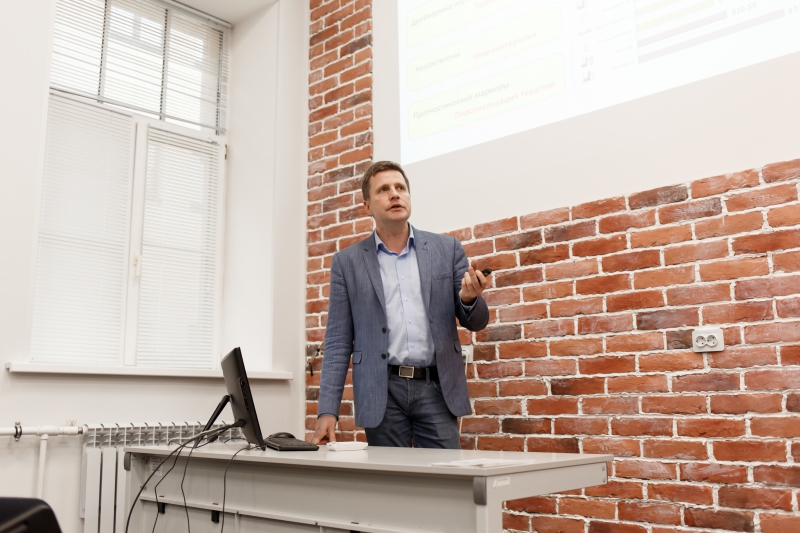 Medicine of the Future: Genetic Technologies

In recent times, a massive leap has been made in regards to the introduction of modern genetic technologies in medicine and other healthcare fields. Because of this, modern-day medicine is undergoing a major change; medical science and applied medicine are very different from what we’re used to.

Medicine of the future, the foundation of which is made today by genetic and information technologies, can result in longer life expectancy and improved quality of life. In addition, these technologies will serve as growth drivers for the economy in the coming decades. The countries that will manage to quickly adopt biotechnologies and genetic technologies will be able to advance far beyond others.

The development of biotechnologies and genetic technologies has much to do with biotechnological drugs. This is a field where Russian companies have shown the most success. Unfortunately, the general public still believes that Russian pharmaceutical companies are mostly producing outdated generic drugs, which is far from the truth.

In the past decade, several Russian companies have been able to introduce completely new technologies and begin production of expensive, hi-tech drugs that had not been previously made in this part of the world. Among them are, for instance, drugs based on monoclonal antibodies, which our company specializes in. We have already introduced or are introducing five such products, and they are among the world’s top-10 in terms of sales.

A company in St. Petersburg called Geropharm is producing insulin for type-1 diabetes patients. Together with other major Russian pharmaceutical companies, they have invested a great deal of funding into technology transfer, into the creation of large research teams; they care about their reputations and the quality of their products.

You can even trace the impact of the appearance of bevacizumab, a monoclonal antibody-based drug, on the market. It’s used to treat metastatic malignant tumors in advanced stages of cancer. It helps prolong patients’ lives by several years when other drugs are no longer effective. Until 2015, drugs of its kind, due to their high cost, were only available to 10% of all patients. When bevacizumab appeared, the cost of treatment dropped by nearly four times, and twice as many patients are now using it.

In addition, the government is able to save more than 2 billion rubles every year, which can go towards buying other important drugs. I think this is one of the best examples of how Russian hi-tech pharmaceuticals can develop the nation’s economy and provide better healthcare to patients.

The Russian pharma has already filled the basic niches in regards to biosimilars. In essence, they’ve done what has already been accomplished abroad 10 or 15 years ago. Now, Russian companies are developing their own innovative drugs.

So what else, besides biotech drugs, is important to modern medicine?

The recent decrease in the costs of genome sequencing has allowed people to acquire complex genetic data for reasonable prices, which helps medical specialists determine which drugs are the most suitable for each particular patient. This data also helps find specific mutations in tumor cells, which lets us use target drugs. We can also study tumor antigens to create personalized vaccines, which basically means that we can protect patients from established tumors by activating their immune system.

A mere five or ten years ago gene therapy was something out of a sci-fi book; but today, several drugs are already available. Unfortunately, Russia is still an outsider here; most research is done either in China or the US. Our company has joined the race two years ago, and we are currently working on ten or so projects in the field of gene therapy. These projects concern severe genetic disorders that affect blood-clotting (hemophilia A and hemophilia B) and severe congenital disorders such as spinal muscular atrophy.

These are all disorders caused by faults with a specific gene. By injecting the patient with a genetically-modified virus, we target particular cells and deliver to them a new, working copy of that gene, basically compensating for the genetic defect that caused the disorder in the first place.

We’ve laid a great groundwork in this area: we have four different virus strains that exclusively target either the liver, or nerve and muscle cells. This way, there is the least chance of side effects or any other dangers. We’re working on making the production of gene-therapy drugs more efficient and hope to begin clinical trials in a year.

You might have heard that this year’s Nobel Prize in Medicine went to two scientists who made possible the development of the first cancer immune therapy drugs by developing the PD-1 and CTLA-4 antigens.

But the antibodies of these two antigens counteract this and make the tumors visible to the immune system. In September, we finished the clinical trials on our drug that uses this very method. According to the data, patients with metastatic melanomas died after about six to eight months, and chemotherapy only has an effect on some 10% of patients. In our trials, we were able to establish control over the disease with 61% of patients, and in 30% of patients, we saw the number of tumor lesions decrease six months after the treatment. Unfortunately, tumors have more ways of hiding from the immune system, which is why we’re working on a series of other drugs that will facilitate the various stages of immune response.

Science gives us plenty of ways to treat illnesses. In the field of cancer immune therapy, the number of new methods and targets discovered in the recent years, as well as the number of molecules that a company can take to clinical trials, is so big that there’s just not enough patients or resources to test every possible option and find the optimal treatment.

That’s why these days we give so much priority to in silico, in vivo and in vitro modeling of diseases. The goal of such experiments is to find the combinations that will have the biggest effect. In these cases, specialists don’t need to put patients suffering from severe disorders through non-optimal treatments. They can just figure out the best option through animal testing or computer modeling, and only then test it on patients, already assured of its efficiency.

Starting Out in Biotech

Development of complex drugs calls for a lot of talented staff. For instance, our company today employs more than 600 specialists involved in pharmaceutical research in one way or another. More than 300 of those specialists work directly in lab conditions. The scope of our work encompasses the entire development cycle of drugs: from molecular and cell biology to pre-clinical and clinical trials. We work with a number of major universities and seek out the best specialists. More than 20 departments of BIOCAD are looking for research staff.

In my belief, the main goal for a Master’s or PhD student is to become fully immersed in their subject area. As a student, you begin to form your worldview as a researcher, your capacity to synthesize and analyze information, to work in a team. That’s what we, as a future employer, look for in graduates who come to us looking for work.