Medical Discoveries That Changed the World

How did discoveries that were made in the 20th century influence what we know about diseases? How can the discovery of DNA structure help us fight COVID-19? Olga Shestova, a physiologist, PhD, and author of the 30 Nobel Prizes: Discoveries That Changed Medicine book, gave an open lecture about the key scientific breakthroughs that had a huge impact on humankind. We summarized it for you. 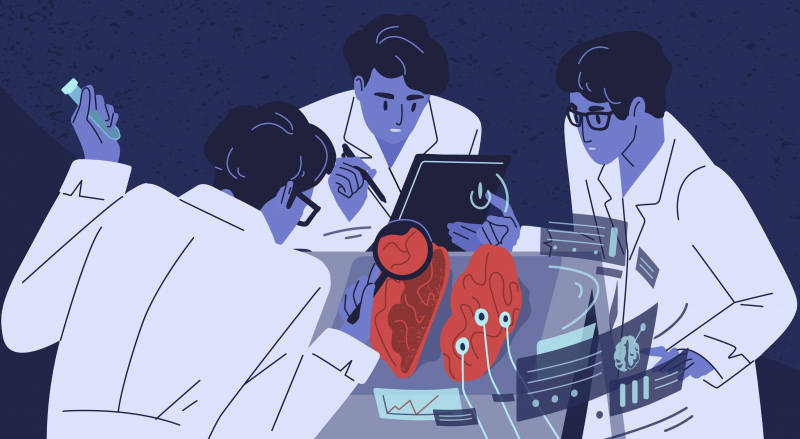 The three most significant discoveries ever made were in the 20th century. The first one lies in the basis of modern immunology. It was made by Ilya Mechnikov and Paul Ehrlich (independently from each other) in 1908. The second one is the invention of antibiotics, including penicillin, performed by Alexander Fleming in 1929. The third one, discovery of DNA structure, was made by Francis Crick and James Watson with the help of Rosalind Franklin in 1953. All these scientists won a Nobel Prize, except for Rosalind Franklin who died before the award assignment. She often gets overlooked, even though she, an X-ray crystallographer, made a huge impact in solving DNA structure.

The birth of immunology

In 1908 Ilya Mechnikov, a Russian microbiologist, cytologist, embryologist, immunologist, physiologist, and pathologist, was awarded a Nobel Prize for phagocytic theory of immunity. While observing sea star larvae, he noticed a phenomenon later called phagocytosis: intracellular structures of the body tried to destroy foreign bodies, such as splinters. Sea star larvae are transparent, so it could be easily seen. Mechnikov realized that this mechanism is a part of the immune system common for all living organisms, including humans.

He also proposed a theory that phagocytes play a key role in atrophy, metamorphosis, reparation, regeneration, inflammation, and infection, as well as argued that diseases are caused by failures in cell protection mechanisms. Modern immunologists proved him right in the late 20th century by studying the immune deficiency caused by HIV.

Paul Ehrlich shared the Nobel Prize in physiology with Ilya Mechnikov. They worked independently from each other and used different approaches to the immune system. Paul Ehrlich studied humoral immunity and protein complexes. Modern scientists know that those are actually B-lymphocytes that are capable of producing antibodies in order to deactivate pathogens.

In 2018, James Allison and Tasuku Honjo made additions to the immune theory and developed a brand-new way to treat cancer. There are many restrictions in our bodies. Cells of the lymphatic system that are responsible for detection and destruction of a pathogen, be that a virus, bacteria, or a foreign protein, are called T-killer cells. Usually, they are held back by the organism, so that they wouldn’t attack everything, including the body’s own cells (that’s what happens when a person gets autoimmune diseases like type 1 diabetes, rheumatoid arthritis, multiple sclerosis, and so on).

The scientists discovered “brakes” that prevent T-killer cells from acting at full power. This discovery made it possible to manage restriction mechanisms and make T-killers cells fight cancer cells. The first results of such a treatment are already there – this method is used in late stages when other ways no longer help.

What fighting infections has to do with the spread of cancer

Before microbiology, people mostly died of infections without knowing what caused them. Research on Bacteria, a paper by Ferdinand Cohn, is considered to be the first milestone of bacteriology. However, it’s Robert Koch who is the founding father of the infectious disease concept. He discovered the causative agent of tuberculosis, one of the main causes of death back then (for example, in Germany, one of seven deaths was caused by it). He also researched and thoroughly described anthrax bacillus and its role in the development of the disease. Koch’s discovery was a breakthrough in medicine and diagnostics.

The invention of penicillin by Alexander Fleming in 1929 was even more significant – it saved countless lives, for example, during World War II. People started to use penicillin to treat all bacterial infections: pneumonia, staphylococcus, streptococcus, diphtheria, and later – tuberculosis, syphilis, and gangrene.

Interestingly enough, the discovery was made almost accidentally: fungal mold of penicillin appeared on the streptococcus colonies because Fleming didn’t always sterilize his lab devices (sometimes he didn’t wash them at all).

Thanks to the discovery of antibiotics, life expectancy increased by 30 years. However, it caused the spread of cancer and aging-associated diseases: atherosclerosis and cardiovascular disease, dementia (Alzheimer’s disease), diabetes, and so on. Fighting them is the most important task of modern medicine.

Another groundbreaking discovery of the 20th century is determination of DNA structure performed by Francis Crick and James Watson with the help of Rosalind Franklin and Maurice Wilkins in 1953. All of them, except for Rosalind Franklin, were awarded a Nobel Prize in 1962.

The discovery of DNA structure not only brought us closer to unravelling the secret of life itself, but also allowed scientists to make a breakthrough in medicine – both in diagnostics and treatment. Scientists discovered many genetic disorders and ways to treat them using genetic engineering. For example, treatment of sickle cell anemia showed great results. Prior to the discovery, the only way to cure it was to transplant bone marrow from a donor, but now scientists are able to replace a section of the defective gene. This method proved to be efficient in 90% of cases.

Genome sequencing and editing makes it possible to create efficient vaccines both for old and new viruses. Development of such vaccines used to take at least 10 years, but now it happens much faster. For example, the Ebola vaccine was produced in a record-breaking five years, and the coronavirus vaccine took less than a year.

Nowadays, there are three ways to design a vaccine. The first one is used to create vector vaccines. They are produced by integration of a SARS-CoV-2 section into the existing chain of viruses. This method is highly efficient, but unfortunately quite dangerous, so it was banned.

The second method is the most promising – it’s about creating vaccines based on messenger RNA (mRNA). RNA vaccines work by inserting an mRNA sequence that encodes a specific antigen in order to activate the immune system. Such vaccines are safer, cheaper, and faster to produce.

The third option is protein-based vaccines. They are a mix of antigens and they cause an immediate immune response. However, getting enough antigens is too expensive for mass vaccination and this type of a vaccine is not a guarantee for long-term immunity.

In the future, there will be many medical discoveries related to targeted drug delivery, vector therapy, and genetic engineering – these fields of research are the most promising when it comes to fighting cancer, genetic and immune diseases, as well as aging overall.

You can find the full video of the lecture here (in Russian).