From Screen to Life: A Movie Guide to St. Petersburg

From comedies to dramas, St. Petersburg has been the backdrop – and the character – in some of our most beloved movies. As the weather improves, why not walk along some of those routes and feel like a character from one of these films? 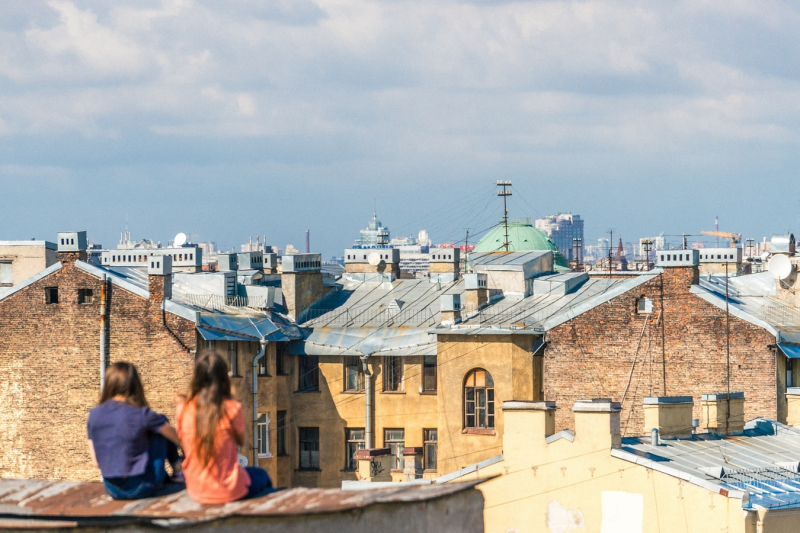 Digital natives can hardly imagine, but some 15 years ago (still the 21st century!) people couldn’t reach each other so easily, as cell phones were as multifunctional as bricks and social networks were virtually nonexistent. Luckily for us, this is now history, but phone trouble became the basis for one of the most romantic movies filmed in St. Petersburg: Piter FM.

Masha is a local radio DJ. Maksim is an architect. Their lives go different ways until Masha loses her cell phone. As Maksim finds it and tries to return it, they fail to meet again and again, but in the process, fall in love with each other. Summer in St. Petersburg here is not just the background of the emerging romance, but an important character in itself – lively and free, it playfully creates obstacles to separate the twosome who are just a step, a turn, apart and makes their feelings grow stronger.

The movie is filled with landmarks from the Belinskogo Bridge to the Swan Canal. The protagonists first meet in Leo Tolstoy Square, dominated by the neogothic House with Two Towers, in the Petrogradsky District. A gloomy gem of the Northern Modern style, the House of Kapustin on the Fontanka River Embankment only gained in popularity thanks to the movie after being shown as Maksim’s secret place for inspiration. Make use of our handy map and take a promenade through all of Piter FM’s key locations!

The characters' apartments are also worth a mention – while Masha enjoys the view of Mikhailovsky Castle from her window, Maksim, who is a part-time street cleaner, lives in a loft with a panoramic view of the courtyard of the Benois House. Add rooftop scenes to that and you can see why this movie has become one which forms a romanticized view of life in St. Petersburg.

When talking about the 1990s, we often use the term “criminal St. Petersburg” which eloquently describes the gloomy vibes of the last decade of the 20th century in Russia. An iconic reflection of this dark age, the movie Brother depicts the dangerous life of those days with all kinds of controversial characters against the backdrop of an abandoned-looking St. Petersburg.

The protagonist, Danila, who just got out of the army, comes to St. Petersburg to find his brother and soon becomes involved in some criminal activities as he learns the rules of big city life. The lead character is certainly a hero of the time – he’s kind and honest, defends the weak, but, at the same time, he kills outlaws in cold blood. That’s why a walk in St. Petersburg in the footsteps of Danila can take you to unexpected places.

The first route follows Danila's first walk around the city center with the starting point at the modern Vitebsky Railway Station. He passes by the Fontanka Embankment, the Kazan Cathedral, the Troitsky Bridge and reaches the Bronze Horseman. Although such a stroll may seem trivial, the movie reveals familiar sights in a completely different angle as the grey-sky look of St. Petersburg is not shown like a tourist attraction, but a morose and gloomy city.

The second itinerary is inspired by Danila’s dangerous adventures. He defends an old man, who becomes his friend, at Apraksin Yard and, failing to reach his brother, spends a night at the mysterious Smolenskoye Lutheran Cemetery with its inhabitants, both dead and alive. He takes a tram running from bandits along the lines of Vasilievsky Island and almost gets shot near the Pribaltiyskaya Hotel. At the top of it, he assassinates a crime boss among the stalls of Sennoy Market (by the way, you can find some nice vegetables and fruits there).

Although Brother reflects a dark past of St. Petersburg to which hardly anyone would wish to return, it’s still nice to explore the filming locations and notice how things have changed in a good way since then. We hope our map will help you not to miss a thing! However, if you are eager to recreate the same atmosphere, it’s better not to get involved in a firefight, as listening to the movie soundtrack playlist would be more than enough.

Unbelievable Adventures of Italians in Russia (1973)

Let’s leave St. Petersburg for a second to make our journey to Leningrad, and do it with an international air, accompanied by charming Italians and a lion. Unbelievable Adventures of Italians in Russia is a classic comedy made jointly by Soviet and Italian directors. It’s considered one of the leaders in the number of sights shown in it: Nevsky Prospect, Moika River, Kazan Cathedral, Palace Square, Smolny Cathedral, and many others (check it all on the map). But could it be another way when some Italians head to Russia in search of a treasure, which, according to rumors, is buried under a lion?

The film is full of lions, which make St. Petersburg more Italian than ever. It’s a great trip back in time to how the city looked almost 50 years ago. Most of the scenes were filmed during the White Nights, a perfect time to walk the treasure hunt route from this movie!

In this historic drama, the entire plot takes place inside the walls of the Winter Palace. Passing through the majestic halls of the Hermitage, a 19th-century French aristocrat and his companion, the narrator, invisible to us, are traveling through time, exploring three centuries of the rich history of the place that once served as home to generations of emperors, saw revolutions and the Siege of Leningrad. Along the way, they get to know the life of the palace’s inhabitants and guests, including Alexander Pushkin, Peter the Great, and the family of Nicholas the Second.

Like any sight in the heart of St. Petersburg, the Hermitage is worth visiting more than once to form your own opinions about Russian culture, the central subject of the movie. If you think this route isn’t challenging enough in comparison to others, just keep in mind that the film was shot in one take. So to get a rough idea of what it’s like, try to enjoy the Hermitage’s treasures for at least an hour and a half without taking a break.

Looking for more scenic routes to follow? Сheck out this literary guide to walk in the footsteps of world-renowned book characters.