Cuba-to-Russia Student Mobility: How It Works and What It's Like

We sat down with four Cuban students who are currently studying at ITMO University to learn about their life in Russia. Alberto Quesada Sevilla, Leoandris Martinez-Serrano, Miguel Angel Perez Ortiz and Miriam Serralbo Cala are getting their Master’s degrees at ITMO University as part of a student mobility agreement between Cuba and Russia. Learn more about what brought them to ITMO University! 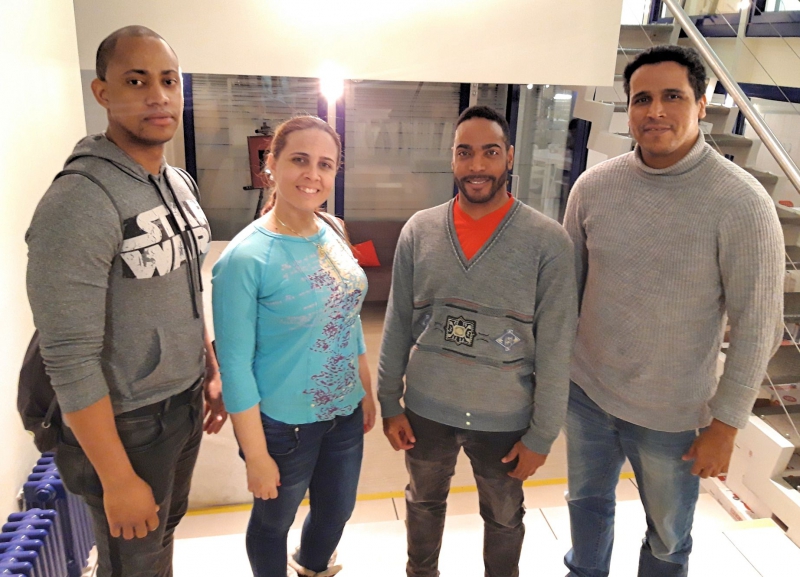 “I like everything here; even the cold! The first year was tough for us because our Russian wasn’t that great and I couldn’t talk to anyone, but it’s gotten easier now. I have friends here, some of them from my class. In the summer, they even invited me to their dachas; we often hang out and go to the movies. And the girls here are very pretty. I’m happy to be here,” says Alberto.

According to the student mobility agreement, the Cuban government picks educational programs available for exchange students based on the nation’s current needs. If their professional qualifications and personal experience are right for one of the programs, Cuban students can take up their Master’s studies in Russia, provided they have already acquired some work experience in the area.

“There’s a special website where you can choose a major you’re interested in and a list of preferred universities. The Russian Ministry of Higher Education then decides which university you’ll get to study at. For instance, my first choice was the Bauman University, with ITMO second on the list, but the selection committee decided that ITMO was a more fitting choice for my major,” shares Leoandris.

Since Cuba and Russia have a long-standing tradition of student exchange, the four Cubans knew what to expect. Although there were, of course, a few things that have changed over the years in Russia. Back in Cuba, there are still many stereotypes about Russia, they say. For example, everyone’s first thoughts of Russia have to do with Matryoshka dolls, the Russian mafia and “Bad Russians” from American movies. “People also think of Russians as very straightforward and diligent, always doing things on schedule and never being late. Russian men drink lots of vodka, and Russian women are elegant and thin,” they share.

When they arrived in Russia it was 5 degrees Celsius outside, and they’d just left sunny Cuba with its 30-degree heat. They’d never been abroad and the new culture, new language and new way of thinking hit them by surprise.

“For a woman, Russia is tough. It’s a challenge. In our country, relationships are different, and we are much closer to each other. All Cubans feel themselves a part of one big family. When we meet people, we hug and kiss each other; this is not the case in Russia. It’s a bit colder in terms of how people communicate. Men adapt quicker, but women struggle a bit more. I also noticed that there is a large difference between Russian men and Russian women. Women here are more liberated, more open; they are more eager to talk. Men are reserved, especially when they’re talking to women, and especially if the woman is foreign. Women here are more likely to come up to you and strike up a conversation,” explains Miriam.

Miguel and Leoandris have found the language particularly difficult. In fact, they all name it the biggest challenge for a foreigner in Russia (besides the climate), mainly because you can get lost doing even the simplest things like grocery shopping (although Leoandris reminds himself that he can overcome this challenge by showing a “You can do it” attitude). Miguel says “there are many aspects of it that are hard to grasp. I think you need at least five years to learn it and use it to its full potential. But then again, that depends on the person; some can probably do it in two or three years.”

They’re also really enjoying Russian food such as borscht and potatoes and cabbage, and they’ve found that Cuban cuisine is going down well in Russia too. They found a Cuban bar to frequent and have been able to make Cuban dishes using local ingredients. When asked about their impressions of St. Petersburg, they say that it’s a very beautiful and comfortable city, especially in the spring, and that they really enjoyed Peterhof and Pushkin. The Nevsky Prospect and its architecture, too, and of course, the Hermitage. “Russia is far from cheap,” they say, “but it all depends on how well you manage your money. It’s pretty accessible for students.”

About studying at ITMO, Leoandris says “I like the international aspect. I asked about ITMO University back home in Cuba and many people are familiar with it, especially its successes in programming. ITMO is very open to collaboration, which I like.” One of the interesting things they noted about the difference between Russian and Cuban education is that in Russia you can do a Master’s degree immediately after your Bachelor’s, but in Cuba, you have to acquire at least two years of work experience to apply for a Master’s.

After they complete their Master’s, they’d like to stay in Russia and complete their education, although Miriam, who isn’t a fan of the climate here, will do the same, but back home in Cuba. They also have a contract with the Cuban government that says they must work as state employees for at least three years after studying abroad.

As for safety, Miriam says “I’d also note that it’s very safe and peaceful here in Russia. You can walk the streets without being afraid that you’ll get mugged. It’s like that in Cuba, too, but not in some other countries, like Guatemala. In Russia, it feels safe. I’ve had to walk at very late times and never saw anyone attack people or threaten them, or anything like that. I think it’s very important to feel safe.”

For those of you who are thinking about coming to Russia from abroad, and particularly from Cuba, you may find Leoandris’s advice useful! “First, learn the language and be a good student. If you learn the language, you’ll learn the way to the Russians’ hearts. Speaking the native language of the country you’re in is all about showing respect to its people. Secondly, be organized, especially in regard to your money. And, finally, watch your health and dress warm. Those are my three tips.”