The many cathedrals of St. Petersburg certainly get their fair share of tourist attention – no true Instagram blogger would fail to capture those when they get to visit the city. Today, however, we are taking you on a tour of some of Russia’s lesser-known churches – the hidden gems of unique architecture, unrivaled craftsmanship and rich historical heritage. 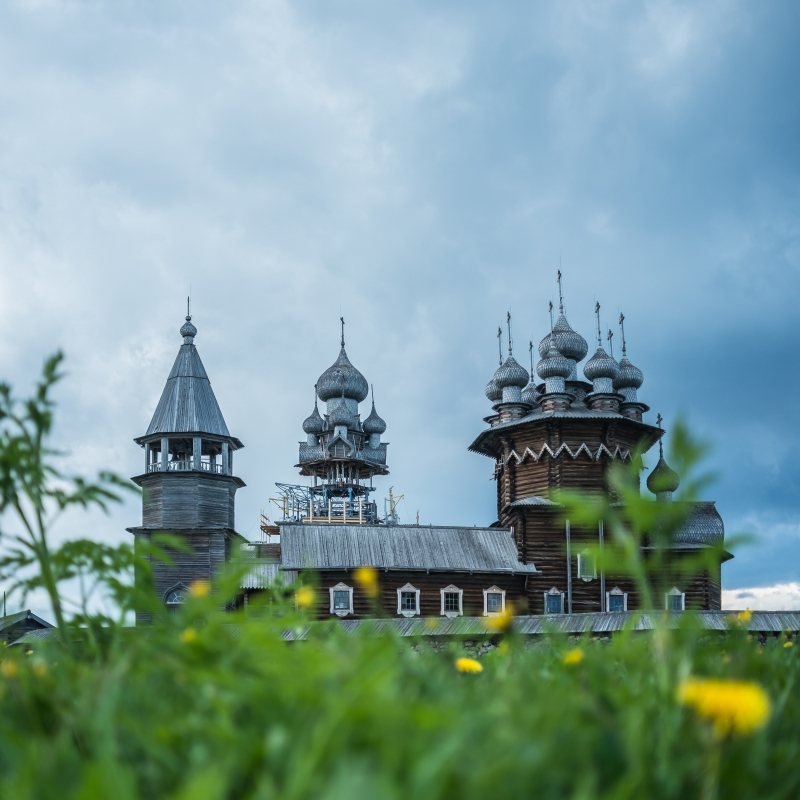 This is a UNESCO World Heritage site located on an island on Lake Onega (thus only accessible by boat) and known to many Russians simply as Kizhi. The word itself is traced back to one of two different words in the Veps language: one meaning moss growing at the bottom of a lake and the other – a place for feasts and celebration. Vepsians themselves are a Finnic people inhabiting mostly the regions around Lake Ladoga and Lake Onega in the Russian Republic of Karelia, right where the Kizhi Pogost is located. As for the church itself, it is widely and, unfortunately, incorrectly said to have been built “without a single nail” – whereas there are actually nails in the many domes of this outstanding architectural composition. The wooden blocks that the church is made of are held together through precise fitting, a centuries-old carpentry tradition. It is truly remarkable how this seemingly fragile and truly intricate construction has retained its original beauty to this day.

Built on a cape between two rivers in the Moscow Oblast, this castle of a church is not only interesting because of its architecture but also its history. In the late 17th century, the land that the church is standing on used to belong to Prince Boris Golytsin, whose political views were so radically pro-Western that he decided to demonstrate them in the exterior of his estate. It is said that he invited architects from Poland, Sweden, Italy and Germany to achieve this aesthetic goal, which resulted in this almost Gothic visage, extremely uncharacteristic for Russian Orthodox churches generally, but especially at that time. With a crown in place of a traditional dome and the whole Neuschwanstein (aka the Disney castle prototype) vibe, it’s no wonder the place is highly popular with tourists and architecture enthusiasts.

Cave Monastery of Our Savior in Kostomarovo

This jewel of a church in a small village near Voronezh in the south of Russia looks like it belongs in a fairytale. There is no clear consensus on when the monastery came into being. Some historians say it dates back to the 17th century, when these lands became a haven for monks and Dnieper Cossacks who refused to accept church unions. Others claim that it was the cradle of Christianity in Russia (or Rus), for that was where the Byzantine Christians fled to during the times of aniconism, and thus where they started their enlightening of the people they interacted with. A place full of legends it is, truly fit to be in a fairytale inside and out.

One of the oldest churches in Russia, this one is located in Arkhyz, a town in the Russian region of Karachay-Cherkessia. It dates back to the times before Rus turned Christian in 988 and is located in what centuries ago was the territory of Alania, a medieval kingdom of Alans (Iranian nomadic people). Not Christians originally, Alans were converted when they fell under the influence of the Byzantine Empire in the 8th century. The North Church is part of the three that were built according to the Byzantine canon during the brief period that Christianity reigned in Alania, all of which are now considered by some historians to be the token of how powerful this medieval land once was. The frescoes inside the church have unfortunately not survived to this day, but there are depictions of what they might have looked like back in the day. The site is also of interest to archaeologists, for many artifacts dating back to early medieval times were found buried under the church, some even of pagan origin.

If you’d like to learn more about the churches and temples of St. Petersburg, head here. And you can always find out more about all things Russia here.