Imagine you are in a park in the bustling downtown and there is sunshine, fresh air, and… total quiet. Doesn’t feel real, does it? Researchers from ITMO University have developed a translucent vented structure that decreases noise by up to 20 dB within the spectral range of 2 to 16.5 kHz. This means that it covers 70% of the audible bandwidth. The new structure can be used to build noise-insulating barriers alongside roads or pavilions in parks. 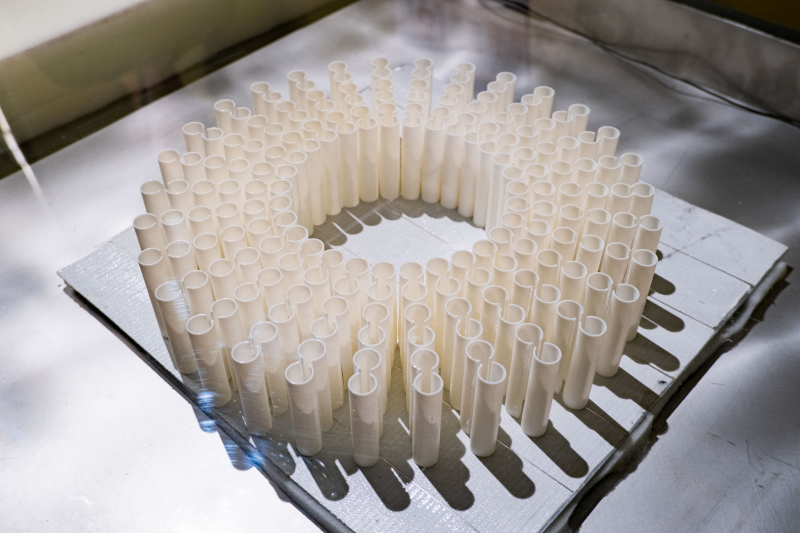 A prototype of the new noise-insulating construction. Photo by Liliya Kichigina, ITMO's School of Physics and Enigneering

Tubes against the noise

These days, noise pollution in the form of loud conversations, sounds of traffic, or public announcements follows us everywhere, producing various negative effects on our health: it can increase blood pressure and stress levels, diminish blood clotting ability, decrease some cognitive functions, and affect our sleep quality. Some of the common methods to counter noise pollution are various noise insulators, such as barriers and screens, often seen along roads. However, they usually look like solid concrete walls, don’t let in any light or air, and are therefore not applicable for use at other locations, such as parks or green areas.

Researchers from ITMO’s School of Physics and Engineering have suggested a solution that decreases the noise by ten times or 20 dB in the range between two and 16.5 kHz. Their solution is based on many pairs of coupled Helmholtz resonators, which are essentially vertically-oriented tubes, in this case 3D-printed, that have a cutting on one side. Three pairs of such coupled resonators make up one layer of the noise-insulating structure.

Importantly, this solution can take different shapes, for instance serve as a barrier along roads or surround a park pavilion like a donut. Additionally, thanks to gaps between rows of resonators, the structure can be ventilated, while the use of translucent materials at the printing stage will also make the whole structure see-through.

From an infinite system to a functional prototype

Developing this noise-insulating technology was a multistage process. First, the researchers modeled a structure made up of an infinite amount of Helmholtz resonators in order to calculate its optimal parameters, such as the inner and outer radiuses, the thickness of tubes, the distance between each pair, and their location in regard to each other.

Then, the researchers moved on to calculations on a semi-infinite structure. This process helped them identify the amount of Helmholtz resonators they will need to assemble a structure close to an infinite one in its properties, establishing a compromise between its size and noise-canceling capacities. Having developed these theoretical assumptions, the researchers were able to test and successfully prove them in a specially developed square waveguide with absolutely rigid walls.

At the final stage, the scientists ran an experiment in another modification of the waveguide: having pulled the walls of the waveguide slightly apart, they lined them with a noise-absorbing material that would imitate measurements in a free space. First, the researchers calculated the sound-transmission coefficient in an empty structure by placing a speaker inside one of its walls and a microphone in its center. After that, they repeated the experiment with their structure inside and compared the level of noise with and without the structure.

“Our solution cuts down the noise by 20 dB (which is about 10 times) in the range between 2 and 16.5 kHz, which is over 70% of the audible spectrum. Moreover, the structure demonstrates different properties in different frequency ranges, equipping it with several noise-canceling mechanisms. For low frequencies, the structure acts like an acoustic metamaterial, while for higher ones – like a phononic crystal, and for the rest of the spectrum it’s like a set of Rayleigh scatterers,” comments Maria Krasikova, the article’s first author and a third-year PhD student at the School of Physics and Engineering.

As their next step, the researchers are planning to test the prototype with larger Helmholtz resonators. In the future, their noise-canceling structure can be used in parks or act as noise-absorbing screens along roads.

“In order to insulate from noise at other frequencies, we will need to change the size of different elements of the structure, while the shape of resonators can stay the same. The bigger the structure, the lower the frequency range it will absorb. For instance, the tubes’ radiuses were six times bigger in our calculations for a semi-infinite structure, which enabled them to insulate from noise in the lower range of the spectrum. In other words, to expand the noise-canceling range, we need to optimize the structure, and this is what we are doing now,” concludes Maria Krasikova.

This research was carried out with support from the Priority 2030 program.