Daniil Sharov on Being a Physicist and a Science Communicator

Daniil Sharov received his Bachelor’s degree as a teacher of physics, but decided to continue his studies after graduation and got into ITMO’s Master’s program in science communication. These days, he is working at ITMO University’s Museum of Optics, teaching at ITMO.KIDS while also developing a system for evaluating the efficiency of exhibitions at science museums. Read on to learn how Daniil manages to combine his research with doing PR in science, while also succeeding at both teaching and doing his own studies. 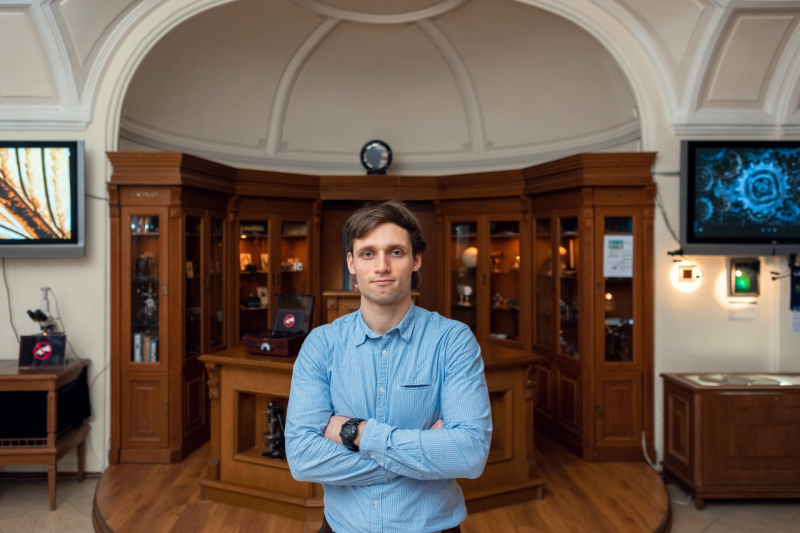 From physics to communication

You received your first degree as a teacher of physics. Did you get the chance to teach?

I got some teaching experience within the framework of a university internship and I liked it. But I realized that it is a demanding profession: school takes up a lot of time because your students are a great responsibility and you want everything to be perfect: the demonstration, the lesson itself, the way you grade their homework.

If you liked it that much, why didn’t you start teaching and went on to study science communication instead?

When I graduated, I kept wondering whether I could be a good teacher, if I was even capable of presenting my subject in an entertaining way. To get inspired, I watched a couple of YouTube vloggers who managed to talk about complex scientific topics while staying close to the facts and yet making them clear and interesting. I realized that I, too, had to learn to do that. That is how I understood I want to study science communication at ITMO to pick up the skills I was lacking. Moreover, I already knew I could teach and this Master’s program opened up more opportunities to try myself in different fields.

Do you teach these days?

Yes, I tutor to practice communicating with children. I also teach primary school pupils over at ITMO.KIDS. It doesn’t take up a lot of my time, but it is a great experience nonetheless, because there I am faced with a rather unconventional task: my job consists not in explaining a complex problem but mainly in engaging my students, making them interested in science.

What were the most memorable aspects of your Master’s studies?

The people I got to meet and the Magic of Light exhibition in Shanghai, which I helped to organize. It is still a project that could be exhibited in any part of the planet.

How did you get involved with this project?

One of my tasks that year was to interview Sergey Stafeev, professor at ITMO’s Faculty of Physics and Engineering, chief expert at ITMO.KIDS Technopark and scientific curator at the Museum of Optics. I met him as well as some other people from ITMO’s FabLab Technopark during the first semester of my Master’s studies. I realized that their team could use a science PR specialist who would also help them develop and improve the museum. The Shanghai exhibition was then at its initial planning stage, so I got involved with it pretty quickly, which allowed me not only to see it unfold from beginning to end, but also to become part of it (read more about the exhibition here).

As far as we know, the exhibition and science museums, in general, were also the topic of your Master’s thesis. Are you still doing research in this field?

Yes, I am a PhD student at ITMO’s Faculty of Software Engineering and Computer Systems. I want to create an in-built system for evaluating the way an exhibition is perceived by its visitors. It would help optimize the work of museum specialists as well as create a more well-organized exhibition space.

You specialize in science museums. Can you tell us more about their unique features?

Their aim is to present facts which visitors might have learned once but have forgotten, or facts that are completely new to them. Such museums used to be the so-called cabinets of curiosities meant to startle anyone who visits them. But now such museums want to engage their visitors in various scientific processes, so that they don’t simply wonder at something, but actively take part in it.

How do you envision a science museum of the future? How will it be different from those we have today?

I think that museums will become the means of communication between universities and the public. There will be a lot of visitors motivated to study and learn something new.

And why isn’t it possible today?

As I see it, the main problem with any contemporary museum is its inability to communicate with its visitors. I am sure that if a dialog was established between the two, their interaction would flourish. My PhD thesis is partly aimed at helping curators monitor the interests of their visitors based on such criteria as the way the exhibition space is managed, the activities offered and the communication with the public.

You are currently getting your PhD, working at ITMO’s Museum of Optics and teaching at ITMO.KIDS. It’s only fair to ask about your plans for the future.

After the Shanghai exhibition I realized I wanted to learn Chinese; it would also be great to study graphic design. We are planning to open a hologram lab at the museum with the best holographic camera in the world. Whenever I think about it, I see myself as both a researcher and a science communicator, maybe I am somewhere in between. I would also like to get a double PhD degree. We have received a great offer from an Australian university. I understand that it is very complicated and would require a lot of work on my part, but it would be wonderful to at least try. I am also going to continue working on international projects and exhibitions at the museum. And I will keep working at ITMO.KIDS, of course. This year we are expecting students from Thailand and I hope it will mark the start of ITMO.KIDS going international. I don’t really have a clear idea of what I am going to do after graduation, but I have almost three more years to figure it out.