For over ten years now, Oliver Graydon has been working as the Chief Editor of Nature Photonics, the most prestigious international journal specializing in original research in the field of optics and photonics. The expert has recently visited ITMO University, where he attended the laboratories of the International Research Center of Nanophotonics and Metamaterials, learned more about the work done by the university’s young scientists, and participated in a tour of the Museum of Optics. In this interview with ITMO.NEWS, Oliver Graydon talked about how Russian science has been changing in the recent years and what surprised him most in St. Petersburg, and also gave advice to young researchers wishing to start publishing in major science journals. 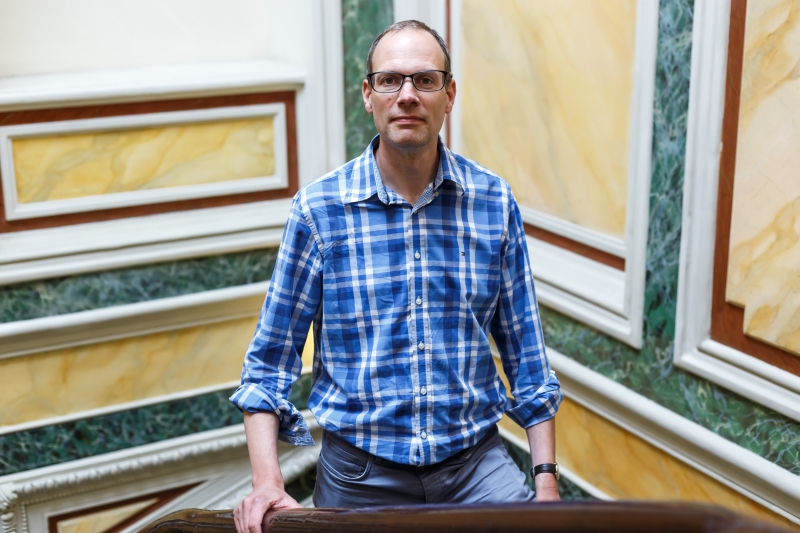 Last week, you participated in the METANANO Conference on Nanophotonics and Metamaterials, annually organized by the staff of ITMO University’s Faculty of Physics and Engineering. Is it your first visit to St. Petersburg and Russia in general?

It is, this is the first time I have been to Russia, to St. Petersburg and ITMO University in particular. Visiting Russia has been very important for me, for several reasons.

First and foremost, I wanted to get an idea of Russian science’s developments in the field of optics. As of now, I am not yet receiving enough information about contemporary Russian developments, and I would like to change this situation, to let people know that we will be glad to see their works on the pages of Nature Photonics.

I also wanted to expand our pool of reviewers, as there are a lot of experts in Russia who specialize in this field. In my opinion, the best way to do it is to come and meet these experts firsthand.

The ten days I spent here were all very successful: so much so that I have almost certainly decided to come to Moscow next year to make a visit to a couple of educational institutions there. I would like to once again meet people face-to-face to get a better understanding of their work and build work communications. Science is unquestionably international. And I would like for our journal to publish the world’s best scientific papers, regardless of their place of origin.

Many are of the opinion that not that long ago, the activities of Russian scientists weren’t as open to the international community. In your opinion, what have been the main changes in Russian science in recent years?

I would like to highlight a couple of things in that respect. Firstly, Russia has a wonderful scientific tradition, especially in the field of photonics. You could remember the invention of the laser, namely semiconductor laser: Russian scientists played a very important role in this process. Russia has a lot of Nobel Prize laureates, including those connected to photonics. The country’s theorists have always been strong in this field, this is a generally known fact.

In the era of internationalization, we can see the strengthening of the cooperation between Russian scientists and the international scientific community. A good example of this is active collaboration between Russia and Australia, which I heard about here. I have also discovered that you have a well-developed collaboration with the University of Sheffield and many other universities from all over the world.

There are a couple of other aspects I have noticed and would like to highlight. First, I have seen that many young people here are interested in pursuing a scientific career. There are a lot of young specialists in research groups here, and I think that this adds lots of drive, enthusiasm, ambition, and positivity into the working process.

And another interesting point: you have a large number of women involved in research. This is very, very good. Visiting different educational institutions, I find that there are not as many women working in photonics as I would have liked to see. It would be great if Russia became an example the rest of the world could follow.

There is some data out there suggesting that the publication activity of Russian scientists in Scopus and Web of Science-indexed journals has been growing over the recent years. Are you noticing that?

Yes. We have discussed, inter alia, the rankings dynamics. I have seen that ITMO University, for one, was ranked sixth in the recent Nature Index (you can read more about it here – Ed. note). But also importantly, we have been shown the plans for the impending changes at ITMO University, including the creation of a new campus (ITMO Highpark – Ed. note), the existence of megagrants and the fact that ITMO has become very successful in obtaining these. That’s why I think that the future increase of publication activity is above all a matter of opportunities. Science needs support. There are a lot of talented people in Russia, and if you provide them with opportunities and equipment, wonderful things will happen.

Another growing trend is interdisciplinarity. There have been more and more research done at the intersection of different scientific fields. How much more difficult it is to work with interdisciplinary research than it is with narrow-focus articles?

The most interesting science happens at the intersection of different disciplines. One example is biophotonics, which has emerged at the junction of photonics and biology. Conducting such research can be really difficult because you have to assemble a working group of scientists who have different backgrounds, different levels of training, and, for the most part, could be seen as speaking different languages on the scientific level. But I think that we are improving, we are making successes in this regard. There are new interdisciplinary centers opening, and we can see more and more scientists from different fields working alongside each other. I am very glad that this is happening, even though this is really hard work.

Speaking about the quality of articles in general, I want to emphasize how crucial it is for us to have well-defined standards, to set in place a strict reviewing process. I believe that people understand the value of Nature Photonics, and will do all I can to maintain these standards. The journal’s success hinges on its reputation, and I will continue to publish high-quality scientific research.

As you have mentioned, on the one hand, there is a strong and determined scientific community, on the other, there is a huge number of people who are not very involved in what the former does. This leads us to the matter of science communication. What do you think scientists have to do to come closer to laypeople?

This is a difficult question, which, in a way, I have been asking myself and wanted to find an answer to upon coming here. But it’s important to understand that the majority of people are curious by nature, they would like to learn more about how the world works, and science gives them this opportunity.

For example, one of the reasons I like photonics so much is because of how tangible an impact on society it has; how much we are surrounded by it in our daily lives. The way we generate electricity and spend it, our communication systems, lighting, displays, how we manufacture things: photonics’ role in all this only continues to rise, and we have to communicate this to the wider public.

We have to engage people in science from a very young age, namely by introducing them to specialized museums, for example, ITMO University’s Museum of Optics, which we have visited today. We have to show them just how important light is for their day-to-day, to familiarize them with the role of light on a domestic, social level. If we just show them a display or a smartphone and say, “Look, there’s loads of photonics in it,” this will already prove effective. We have to emphasize the values carried by science.

Apart from this, we have to nurture the understanding that you can make a career in science that will be very gratifying for a number of reasons.

Whilst at ITMO, you have also been introduced to the work of young researchers here. Could you give some advice to those who are just starting out in science, on how they could get their articles published in the world’s leading science journals?

One strategy for success is to always strive to publish high-quality works, even though there might be not a lot of them. It is also important to seek communication with more experienced specialists around you, those who already have a solid publication record. They can definitely share some of their experience with you.

And the third point: you have to make sure that the main message of your work reads well, that it intelligibly runs through the entire article. In my opinion, it is this that constitutes the significance of communication in science, and this is my main role right now. Conducting research has ceased to be my main focus, but I am very interested and am a firm believer in effective science communication.