On June 29-30, the third SchooL on Advanced Light-Emitting and Optical Materials (SLALOM) was held at ITMO University. The event is organized by the Laboratory of Hybrid Nanophotonics and Optoelectronics on the basis of ITMO’s Faculty of Physics and Engineering together with Lomonosov Moscow State University and with support from the Russian Science Foundation. For the first time in its history, this year the school took place online. 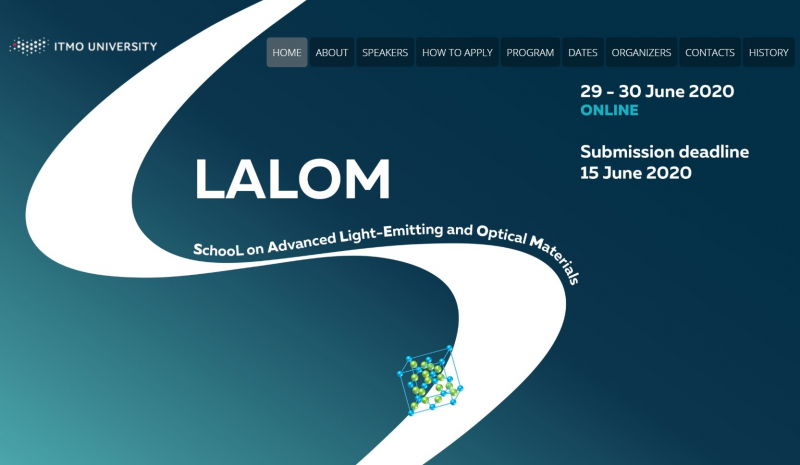 The event focuses on the latest developments and discoveries in the field of light-emitting and optical materials in telecommunications, quantum computing, displays, photovoltaics, and biophotonics. Over the course of two days, the world’s leading experts delivered reports and lectures for students and young researchers. The participants, coming from both ITMO and other Russian and international universities, had the opportunity to present poster reports on their own scientific achievements and projects and compete for awards. The best reports were commended by a jury composed of recognized experts and regular participants.

As noted by Sergey Makarov, the chair and main organizer of SLALOM, senior research associate at the Faculty of Physics and Engineering and head of the Laboratory of Hybrid Nanophotonics and Optoelectronics, the field of new materials for optoelectronics and nanophotonics is among the most actively developing ones today.

“The relevance of the topic of light-emitting nanomaterials and materials for optoelectronics and photovoltaics is now growing exponentially. Every day, more new materials are discovered that each have the potential to lead to a big breakthrough in these fields. What’s more, these fields are very interdisciplinary in nature. That’s why the speakers were selected in such a way as to cover the widest range of fields possible, albeit grouped around the core that are new physical phenomena observed in nanostructures and new materials,” commented Sergey Makarov.

This year, the event’s geography turned out to be fairly vast: lectures were delivered by 17 experts from 30 countries, including Italy, Germany, the USA, China, and Singapore, while 18 PhD and Master’s students presented their poster reports. First and foremost, the organizers invited the speakers they already had well-developed scientific contacts with, as well as those whose reports were singled out at similar conferences. One of the most important criteria was a speaker’s ability to present scientific material in the format of an educational lecture, so that an unspecialized audience would be able to comprehend it. Of course, a lot of attention was paid to speakers’ qualifications – among them were leading experts and world-class scientists.

According to Sergey Makarov, over the last year the school’s status has grown significantly – which allowed the organizers to invite only the best in the field.

“While the previous schools only featured a couple of plenary reports by prominent scientists, this one boasts over ten speakers on that level. Among them, for example, were Andrey Rogach – a professor from the City University of Hong Kong, head of a megagrant project at ITMO University’s International Research and Education Center for Physics of Nanostructures, and a well-known expert in the field of nanomaterials, quantum dots and nanocrystals with a h-index of over 100; and Anvar Zakhidov, a prominent expert in the field of light-emitting diodes and nanomaterials from the University of Texas at Dallas, together with whom we head ITMO’s Laboratory of Hybrid Nanophotonics and Optoelectronics.”

“Among other things, hosting this year’s school was especially pleasant because some lecturers applied for participation on their own initiative, recognizing the usefulness of interacting with our community,” adds Sergey Makarov.

The school’s main aim is to facilitate exchange of experience and help young researchers meet established industry experts. This is one of the requirements of the Russian Science Foundation grant supporting the event. Another mission of the school is to attract industrial partners interested in high-tech inventions by Russian scientists, as well as to create a special university ecosystem where high-level science meets engineering sought after by Russian economy.

The event’s new format brought about certain limitations: this year, the organizers had to forego the industrial section, laboratory tours, and cultural program.

“Of course, it’s a pity that participants were unable to come and participate in person. All in all, networking is an important element of such events. Usually, we also provide our colleagues with laboratory tours, during which we show them around our faculty’s laboratories and share the results that were generated there. We always want our guests to witness these truly interesting small discoveries made here at ITMO by young and talented specialists. The latter we try to familiarize with the scientific community as often as possible, because we understand the importance for young scientists to show their competencies in person and independently discuss possible options for collaboration with the world’s leading scientists,” comments Sergey Makarov.

But the transition to the online format didn’t affect the composition of the participants – in the end, none of the invited speakers refused to attend.

I’m a theoretical physicist working with computer modeling of nanostructures and devices that are based on photocells, sensors, and light-emitting diodes (LEDs) and can be used in different fields. Over the past decade, I’ve been working in close collaboration with applied physicists and experimenters – mainly ones from Russia. Ten years ago, I became a visiting professor at the Ioffe Institute, and last year I also joined the ITMO Fellowship and Professorship Program, as a result of which I spent 40 days working at ITMO – during the time the first SLALOM was organized. Hence, this is the second time I’m participating. I really regret the fact that I couldn’t attend it in person this year – I very much wanted to, as I really love St. Petersburg. As soon as it becomes possible, I’ll come back to work at ITMO for a bit.

My report focused on my 30 years of expertise in modeling structures and building theoretical justifications of experimental data. Sometimes it so happens that an experiment produces a result but its authors don’t understand why it is the way it is – they need a theory that would explain it.

Oftentimes, generating a new theory is far from easy – this requires building a model that is as realistic as possible and based on as much experimental data as possible. For example, if we’re working with a nanostructure, we have to model its real form, an atomic device. Based on these computer models, we’ll be able to predict materials’ behavior, and often this allows us to save some time and energy as we don’t have to try to create something that won’t work. So my job is to explain why the experiment gave these exact results and predict how to create a new material that can be used in some practical field or another.

I attended both days of the conference and listened to practically all expert presentations. For one, I really enjoyed the report on quantum dots that was given by Nikolai Gaponik from Dresden University of Technology – I didn’t know a lot of things the speaker talked about, so it gave me a new way to look at things.

My report was about the diffusion of excitons in self-organizing nanocrystal systems. We have perovskite nanocrystals, which are very bright emitters. They come in the form of very small cubes of ten nanometers in size that can be arranged in a grid. And the diffusion of excitons can be created in one nanocrystal – and from it, transferred to all the neighboring ones. This is what we’re doing: we’re creating an installation from a lattice of nanocrystals and measure their conductive properties.

The diffusion of excitons is one of the methods of energy conversion in many natural systems: a notable example is photosynthesis. It’s also used in many devices based on quantum dots: LEDs, photocells, solar panels.

Perovskite nanocrystals are very powerful sources of energy, and they are easy to create. The main problem is that they are very sensitive to the environment: to the effects of oxygen, water – they degrade very quickly. We’re researching various ways to make them more stable, for example, by using polymer films or coating perovskites with layers of a ceramic material. This way, we could use perovskites in devices that would be stable enough not to disappear in the environment.

Unfortunately, as I’m situated in a different timezone, I couldn’t attend other speakers’ lectures in real time – now I’m waiting for their recordings. But I managed to watch a couple of poster presentations on perovskites, which is my specialization, as well as several reports on topics that I knew nothing about, for example topological insulators or optical fiber. It was very interesting.

Ekaterina Tiguntseva, a PhD student at ITMO’s Faculty of Physics and Engineering, winner in the nomination “Nanophotonics Breakthrough”

This time, despite the online format, the school became bigger, moved to a new level. The speakers were all prominent specialists in their fields who shared the results of their latest research and presented a lot of useful information.

The title of my poster report was “Resonance Effects in Halide Perovskite Nanoparticles”. It featured data from three of my projects in which I studied the Mie and Fano resonances in nanoparticles as well as sub-wave particles working as single nanolasers (ITMO.NEWS covered this research here).

This was my first experience of presenting a poster report online, and it seems that it won’t be the last. This format allowed me to discuss my findings with other participants, who attended the “poster room” and were actively asking questions, in a more detailed way

That I scored the most points for my poster presentation and got a special nomination was a surprise for me. I’ll admit that it’s pleasing and motivates me to further present my work at conferences and schools. I was glad to be part of this conference and would like to thank the organizers for the huge amount of work they’ve done.