Do you live in St. Petersburg? Then you’re likely aware of what it’s like to live in a rainy climate. You always need an umbrella, your choice of clothing is limited, driving is a hassle, you need to carry around all the extra stuff, can’t spend as much time in parks as you’d like to and, of course, the rain outside puts you in a mood. Do not fret – the age of technology has a solution to any problem. ITMO.NEWS has put together a list of inventions, both clever and odd, that help people live, laugh and love despite the rain. 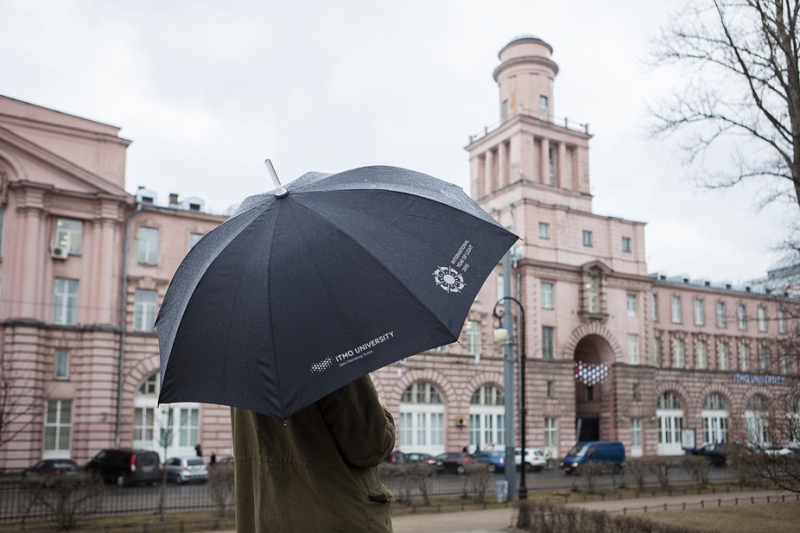 Clothes for any weather

It rained in the morning, so you put on a coat, but then came the evening heat and now you’re stuck in stuffy clothes. This is a situation that many who live in unpredictable climates are familiar with. It’s not just St. Petersburg – you can experience the same situation in Seattle or in Scandinavia. But what if clothes could not only protect you from rain, but fare well in hot weather, too?

Engineers at the Columbia clothing company have produced a material that is water-proof, yet breathable. This is due to microscopic pores in the material that don’t let in water, but still provide airflow. In most water-proof clothing, the protective layer is usually placed beneath another material that is far more prone to soaking. However, this material serves as an outer layer. According to the company, the product was successfully tested by 147 volunteers all over the world. The coats made with it allow wearers to avoid sweating in hot weather and stay dry in the rain. Another issue common in unpredictable climates is related to maintaining a stable temperature indoors. It doesn’t seem that hard to keep your windows open on a warm day and close them when it’s raining, but it’s a bit more complex when you’re dealing with large spaces. Of course, there is air conditioning, but it is not eco-friendly, wastes resources and, well, some people just want to breathe fresh air. Chao Chen, a Master’s student at the Royal College of Art, has invented a construction material that can expand when in contact with liquid and shrink when it’s dry. This is achieved not through an outside stimuli like electricity or some mechanism, but using sensors. According to Chen, he was inspired by regular pine cones and the way they “close” when wet. The material can be used, among other things, for roofing.

An unusual solution for rainy day leisure has been proposed by South Korean designer Sung Woo Park. Inspired by factory conveyor belts, he developed the concept of a bench with a revolving surface. That way, if one side of it is wet, a passer-by can use a handle to spin the bench around until they get to the dry side.

Despite the seeming simplicity of this project, the invention received great praise from online users. The “belt” can’t move on its own, so you can even walk and dance on it without any risk, jokes the designer.

To make walking in the rain more fun, the Japanese startup company Pileus, based at Keio University, has come up with an umbrella which doubles as a projection screen. The handle is augmented with a small projector that displays the images onto the inner dome. The developers explain that you can use it to look at photos and videos as well as connect it to Google Maps to know where you’re going. The umbrella also boasts a movement sensor and GPS. Despite the fascinating concept, the wonder-umbrella still looks very cumbersome – at least for now – due to the size of the camera and the projector and carrying it around isn’t easy. It’s also not quite clear how the device will behave under heavy rain. Still, the developers have successfully presented their project at conferences and expos.

Holding an umbrella can be very exhausting: you only have one free hand (unless you’re also busy texting). The folks at Drones Direct have found a solution to that problem by attaching a drone to it. The owner of such a device can synchronize the drone with their smartphone and have it follow its owner around. The device can handle bad weather, avoid obstacles and even has a built-in camera. One drawback is that it only holds 30 minutes’ worth of charge – just enough to take your dog for a walk.

It’s not clear just how the flying umbrella would handle slanting rain, sideways rain and upward rain (this is a thing in St. Petersburg!). The price is pretty steep right now, too.

Several years ago, Samsung presented its new invention – a smart window. This is an LED screen that functions as both a window and a computer screen. Users can use it to browse their mail, social media, calendar and other apps. In addition, the “window” has a virtual blinds feature and the neighbors won’t be able to see through it from outside. But the most important feature is that the window can display images of sunny beaches and lush jungle to those who aren’t satisfied with their actual view.

No information on how to buy such a window is available, however. In the meantime, another company called Hisense has showcased a transparent 3D-TV that can also be used as a window or a computer.

It’s not news to anyone that rain and snow have a negative effect on road visibility. Drops of water and snowflakes reflect light, causing issues for drivers. A project co-developed by Intel and Carnegie Mellon University aims to solve that problem by “dimming out” these flashes of light and, in a way, erasing rain and snow out of the driver’s field of vision. For that purpose, the scientists used a complex system involving a camera, projector and a computer. First, the camera, acting as a sensor, detects the drops of rain or snow in the driver’s upper field of vision and relays the information to a computer, which, in turn, calculates the fall trajectory of each object. The projector, following that trajectory, illuminates the drops in a way that makes them less flashy. The whole setup is small enough to fit inside the headlights of a car. Even though the driver still sees the falling rain and snow, it is now less of a glint and more of a stream of gray spots which obscure less of the road.

Do you often chuckle when you see solar panels in places that don’t get much sun? Perhaps, soon it won’t seem as funny any longer. A group of researchers from several Chinese universities has developed solar panels that use ions of ammonia, calcium and sodium gathered from rain to produce electricity. The panels are unique in that their upper surface is coated with graphene.

When water comes in contact with graphene, it creates electron migration in the ions, creating pseudocapacitors that produce electricity. The panels can be used in rain and sun. Unfortunately, the performance index of these panels isn’t that high as of now and amounts only to 7%. For comparison, regular solar panels tend to be around 20%. Besides, the devices are quite costly. For now, the scientists’ main goal is to increase the efficiency of their invention.

And on a closing note: whenever you get fed up with the rain in St. Petersburg, just remember – in India, rain doesn’t stop for four months!