The project of the second campus of ITMO University based on the research, education, and innovation center ITMO Highpark located in the satellite city Yuzhny was positively assessed by the State Expertise Center. 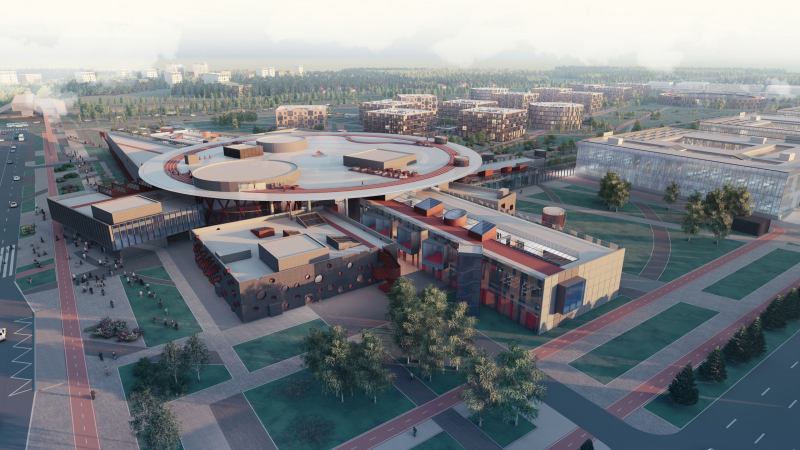 The St. Petersburg State Expertise Center gave a positive assessment to the project of the first construction stage of ITMO University’s Second campus that will be located in the satellite city Yuzhny. It will be implemented in two steps. First, the main educational campus, four buildings of the dorm number 1 for 618 residents, and the road infrastructure will be constructed. Then, three more buildings of the dorm number 2 for 463 students will appear.

In late December, it was announced that the St. Petersburg State Expertise Center gave a positive assessment to the digital model of ITMO Highpark’s utility network.

“The implementation of the ITMO Highpark project is proceeding in full accordance with the approved schedule and the plans that we announced earlier. By the end of the first quarter, we plan to obtain the approval of our design project for the area from the government of St. Petersburg, as well as a construction permit, and begin the construction of the first facilities,” says Andrey Nazarov, CEO of ITMO Highpark.

The main educational building of ITMO Highpark with a total area of 30,000 m2 will encompass nine blocks under a common roof, on top of which sports facilities will be located. A running track will outline the whole ensemble. Other than regular buildings for work and study, the main campus will also include coworking spaces for individual and team work, a lab for prototyping of devices, a digital library, a food court, book and souvenir shops, as well as a parking lot for car and scooter sharing.

Another feature of the campus is the transformable atrium that can be used as a congress hall for 2,000 people. Moreover, a student club, as well as a museum of science, technology, and art will also be located there. The building can be used by 1,600 students and 500 teachers and staff members simultaneously. Both Master’s and PhD students of ITMO University will study and conduct research there. Bachelor’s and Specialist’s students will continue to study at the campus located in the center of St. Petersburg.

“When we started to work on the design, our partners and us – the architectural bureau Studio 44 and ITMO Highpark JSC – faced a challenge, as we had to design a campus in such a way that would allow it to remain modern and comfortable not only by the time of the completion of construction but also for years to come,” noted the First Vice Rector of ITMO University Daria Kozlova. “We were able to find the balance between the contemporary standards and our vision of the future. We are glad that the experts gave a positive assessment to our project.”

The dorms’ roof is made of glass in order to increase the amount of natural lighting. The buildings are placed in the way to form a square via which the students be able to get to the local shops, the post or bank office, and other facilities. During the warm season, summer cafes will operate in this area which will also become a great place for various outdoor activities.

“An important and in many ways unique decision in the design of the facilities of ITMO Highpark was the creation of joint functional spaces, public areas both between the sections of the main educational building and in the dorms. It’s also worth noting the solutions for the digitalization of the campus: ITMO Highpark’s offices were designed in such a way that it’s possible to meet and consult students remotely,” said Pavel Krutyakov, chief specialist of the State Expertise Center’s Civil Objects Department who acted as the leading expert during the assessment.

The entire area of the Second campus will be constructed in accordance with the Green Zoom standards using energy-saving technologies. For example, rainwater that usually goes to waste will be purified and stored in reservoirs. It’ll be later used for cleaning sidewalks and watering trees and bushes.

Once the first stage of construction is complete, the construction of four research centers and a sports facility will begin. The documentation was created by the architectural bureau Studio 44. ITMO Highpark JSC is the property developer. You can read more about the project in this article.