What’s In Season? A Guide to Summer Fruit & Veg in Russia

Who doesn’t love a lovely watermelon on a hot summer day? But what often sets a local and a guest of the city apart is knowing when it’s smart to buy one – and when you’re likely to end up with a dud. We all know each fruit and vegetable has its season, but it’s often not the same in different parts of the world. So if this is your first summer in St. Petersburg, here’s how to make the most of your trip to the farmer’s market. 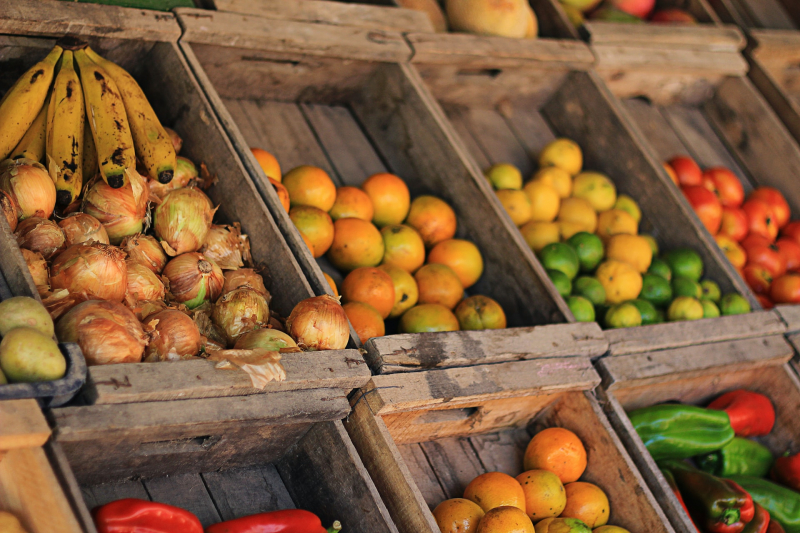 These pastel-colored cousins of the pumpkin are a Russian kitchen staple, and for good reason! They’re a great choice nutrition-wise and are incredibly versatile. Simply grill them, grate them to make fritters (or, as Russians call them, oladyi), or even use them raw in a salad. Or, if you’ve got time, go for the all-time Russian classic: squash caviar.

As luck would have it, Leningrad Oblast’s swampy nature is the perfect environment for blueberries to grow. As summer reaches its warmest point, locals stream to the forest to fill their baskets with berries and mushrooms (see below). The classic blueberry pie, delicious though it may be, can be a hassle to make, but these tender little fruits are also perfect on their own or as toppings on yogurt, ice cream, or anything else (throw them into your pancake dough for a truly decadent treat).

Unless you’ve just arrived in Russia, you’re probably already aware of just how much everyone here loves mushrooms and picking them. The porcini, the boletus, the honey fungus, and, of course, the much-sought-after chanterelle (and a dozen others) – listing all the ways you can cook them would take a separate article of its own, but we especially recommend a simple cream pasta or pan-frying them with potatoes, Russian-style.

Eggplant (or aubergine, if you prefer), is a pretty divisive vegetable, but it can truly shine if you follow the rules. Aside from obvious applications such as frying, stewing or grilling, you can try to capture the magic that is baba ghanoush, or even marinate it, Italian-style.

If you need to add a bit (or a lot) of acidity to your meal, this tastebud-tingling fruit is the undisputed king. Though available all year round, it’s in late summer that it truly shines, especially when beefheart tomatoes arrive on shelves. Whip up a soup that’ll warm your soul or go the route of least resistance and chop it up with some mozzarella for a relatively budget-friendly and yet incredibly filling and satisfying meal for a hot day. Tip: throw in some chilled pasta to make it even more filling.

At this point, pretty much everyone knows the usual watermelon life hacks – you’ve got to knock on it, look for the yellow spot, weigh it in your hand, and so on. But are you aware of just how many unusual ways there are to consume it? One trendy and delicious approach is to mix it with some crumbly cheese (like feta) and mint for a great summer salad (by the way, did you know that Russians often pair watermelon with white bread? “Don’t knock it till you try it,” is all we’ll say on the matter). And speaking of culinary traditions, you can also try pickling it – or keeping the rinds to make some sweet-and-crunchy preserves for later.

Still hungry? Read all about the city's top bakeries, from chains to holes-in-a-wall. Interested in eating (and living) plant-based in St. Petersburg? Check out Russian Vegan's Shopping Starter Pack, How To Be Vegan in St. Petersburg, and More Cool Vegan Places in St. Petersburg