The international volunteer camp Ecological Raids was held at ITMO University’s health-and-sports center Yagodnoe. For two weeks students from 12 countries attended talks and workshops on social and ecological projects, came up with ideas for Ecohouses and got to know more about Russian culture. All of this happened on the shores of a beautiful lake in the Karelian isthmus. 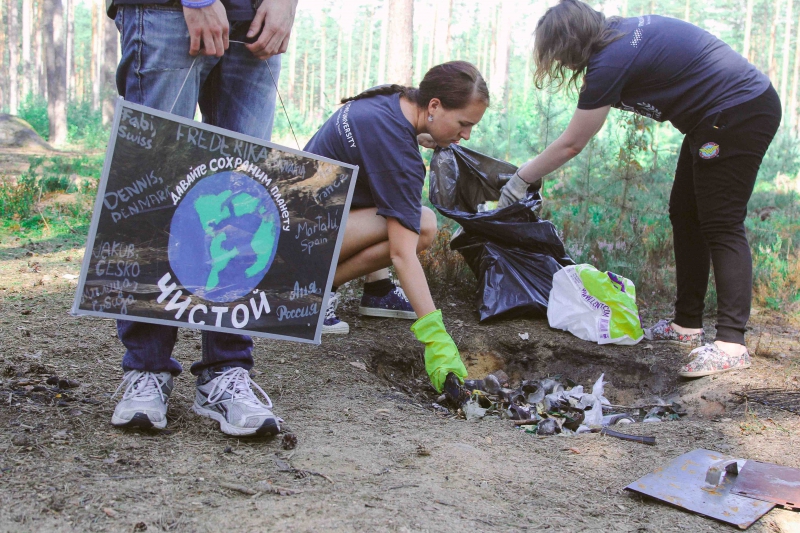 Ecological Raids – is a volunteer camp, which was held for the third year in a row this August by ITMO University. Applicants need to pass an interview in English, since the camp is run in English. During the day, participants took part in special eco-projects like planting trees, cleaning up the Yagodnoe territory; they also participated in tours, lectures and workshops. For example, this year, there were seminars on waste sorting, recycling, alternative sources of energy, natural cosmetics, and foodsharing. There were specific parts of the program dedicated to social entrepreneurship and developing volunteer projects.

This year’s Ecological Raids included a special project where participants worked in teams on an Ecohouse. The head of the project, Aleksandr Shevyakov, a student from the Department of Computer System Design and Security, explained that an Ecohouse includes several enhancements which help make your home more environmentally friendly. The house they came up with includes LED lighting, solar batteries, gas sensors, an automatic waste sorter, and a “smart” air conditioner in the garage. The house would also have an automatic air temperature regulator. All the furniture is made from recyclable plastic, and only environmentally friendly materials are used in the house’s construction. “So far we have only taken advantage of some of the possibilities available for Ecohouses. We already have an interested investor who is willing to try out the system in his home. So the ITMO University team will continue developing this project further” – explained Andrey Zlenko, head of the Center of Social Design and Entrepreneurship Center.

Besides working on the Ecohouse, the Ecological Raids participants made their own cosmetics using only natural ingredients. In addition, they implemented technology for producing new paper from waste paper at home, which they learned about during one of the workshops; they also learned how to make solar batteries, microgenerators and other devices to obtain energy from alternative sources. ITMO.NEWS asked the young ecologists why they came to Russia to learn about recycling, what were the most memorable parts of their stay at Yagodnoe and how they will use the experience they gained. I’ve participated in similar events in Europe, so when I found out about Ecological Raids, I thought it would be a great opportunity to learn more about ecological projects and get to know Russian culture, and travel to a new place. I really liked the lecture on waste sorting. The workshops about conducting business meetings in the field of social entrepreneurship were also very interesting.

I’d like to work on my own ecological project in the future. At university I am learning about innovation, so for me it was really useful to learn some basic things about ecological projects and events. It was exactly what I needed. I decided to come to Ecological Raids to change up my surroundings and to meet new people. I thought it would be great but I didn’t realize it would be this great.

I wanted to participate in something that is different to what I usually do, to try something new. I can’t say that I had no experience with ecological initiatives beforehand – I’ve participated in several similar projects in Estonia, Germany, and other countries. When you are involved in ecological projects, you understand that you’re doing something important that could make the world better. Here at Yagodnoe, I really liked the seminars and workshops, they were very useful. Also, while I was here I learned how to row a boat. I wanted to learn more about working with ecological initiatives here. I participated in other summer ecological camps before. This camp at Yagodnoe is different because there are people from different countries so it’s quite a “mix” of cultures. We spent two weeks here and really became good friends. We also spent quality time outside of the sessions: for example, we planted pines, I’ve very proud of this.

I came to Russia with my friend. I often participate in ecological camps, and I’m a big fan of Dostoyevsky. Being here gave us an opportunity to learn something new and to also visit an interesting country. Ecological Raids is different from other similar events in that there are a lot of people here. About 30 people from 12 countries. Usually there aren’t many participants in ecocamps. Having such a diversity of cultures is always interesting. There were also really interesting lectures. The seminar on natural cosmetics was a real highlight. Besides the educational part, there were sports and ecological events. The Ecological Raids participants also played games based on Russian folk tales, held themed evenings, made an ecofilm, and researched local flora and fauna during special short hikes. They also got to see some of the sights of St. Petersburg during tours.

Ecological Raids was organized by ITMO University students with the support of the Ministry of Education and Science of the Russian Federation as part of the “People Need You!” competition.