Coming all the way from the South American country of Ecuador, Ricardo is a first-year Bachelor’s student studying mechatronics at ITMO. He developed a strong interest in robotics while he was in school and decided to pursue it further in college. His hobbies include singing, guitar music, and photo editing. Read on to learn more about this talented Latin American student and his experiences here in St. Petersburg since his arrival in September 2021. 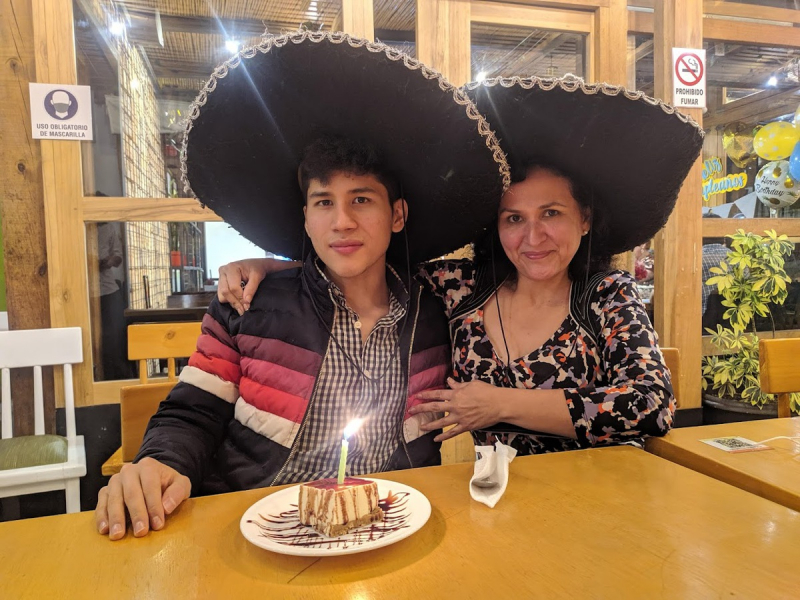 Ricardo and his mom. Photo courtesy of the subject

Tell us something about yourself.

I am a 19-year-old guy from Ecuador, a country in South America.  My main interest in high school was mechatronics. Hence, I decided to pursue it further during my Bachelor's and learn more about electronics, programming, and robotics.

How would you describe Ecuador?

It is a beautiful country located near the equator on the west coast of South America. The landscape comprises the dense Amazon jungle and the Andean highlands. We also have a rich diversity of lifeforms thanks to the Galapagos Islands.

I have been interested in many activities all my life. During my childhood, I learned English and French. I also like to sing and play the guitar. I am very passionate about tennis. I have joined the KronBars tennis team here at ITMO. Some of my minor hobbies include finance management, photo editing, and more.

Do you have a coach?

Yes, I do have one. I have practice once a week on Mondays or Thursdays. There is a nice tennis court at ITMO’s KronBars Arena.

What is your fondest childhood memory?

In high school, I participated in a robotics tournament. I made a robot that can play football and won 3rd prize. It made me fall in love with robots. It still reminds me why I decided to study mechatronics and hence is a very special memory.

How did you find ITMO?

There are two parts to this story. Towards the end of high school, I was interested in learning a new language again. I decided to start learning Russian. So when the time came to select a university for my higher education, Russia was at the top of my list. I had applied for the Russian Government Scholarship and won it.

Now let's talk about ITMO. St. Petersburg has been a magical city to me since my childhood. I had heard stories and watched videos about this beautiful place. When I found out that St. Petersburg is home to ITMO, one of the best universities in the world, it was an obvious decision for me and my family.

Did you study Russian as a part of the Foundation Program?

Yes, I did study there, but remotely. Due to the pandemic, I was unable to travel to St. Petersburg, so I had to attend online lectures from home.

How comfortable are you with your Russian?

I have definitely improved in the past few months. I listen to music and watch movies in Russian. I am able to communicate with the locals now. I am enjoying the progress.

What do you study in your Bachelor’s program?

In the first semester, we studied mathematics, programming, and a few introductory courses on building robots with LEGO. It was really interesting but also challenging. I also had a few soft skills classes during the semester.

What did you do using LEGO?

We were taught to make various machines, such as a motor, using LEGO blocks. We then program it to perform simple actions based on basic mathematical calculations. It is the first step towards modeling real robots.

Is this a good starting strategy?

Yes, it’s a very good idea for beginners. It helps us understand the basics of machinery. Had we been introduced to complex real-world machines in the beginning, we would have surely been puzzled by their complexity. Learning with LEGO bricks is like taking baby steps towards success.

Where do you see yourself after your Bachelor’s?

I would sure love to pursue a Master’s. However, I am not sure if I would do it here or somewhere else. If I get an opportunity to do it at ITMO, I would definitely love to do that. But I want to keep all my options open.

At the same time, I would also like to grow in other aspects of my life. I would love to learn a new instrument and get better at tennis.

Who is your favorite tennis player?

My favorite tennis player is Rafael Nadal from Spain. He is an absolute legend of the game. He has won 21 Grand Slams (singles), which is unbelievable. Even at the age of 35, his fitness is world-class. He inspires me a lot.

What about Ecuador’s national team?

It is also a very good team of talented players. Currently, they are placed 3rd in the World Cup qualifications race. I hope they qualify for the mega event. My favorite national team player was Antonio Valencia, who used to play for Manchester United.

How did you spend Christmas and New Year?

It was quite different this time, as I was away from home. I missed my family, especially my brothers. But I was not sad. I spent the holiday season absorbing the vibe of St. Petersburg, experiencing the snow, and cherishing the decorations.

Did you find a restaurant in St. Petersburg that has good Latin American food?

We went to a South American bar, but the food was not authentic. They had lots of drinks but no good food. I will keep searching for a good place with Latin American cuisine for sure.

It is not bad, but I prefer Latin American food. I am just too attached to the taste of South America.

What is the difference between Russian and Latin American cuisine?

That’s a tough question to answer. It's more of an emotion. But I would say that Latin American food is cooked for a much longer time. For example, if you eat pork in Latin America, the texture is quite different as compared to that available in Russia.

In Ecuador, you also get a lot of seafood. Sharks, tuna, oysters, and shrimps are very common. They are a staple in my country.