Sagar Kumar: My Desire Is to Help Humankind in Every Way Possible

Hailing from India, Sagar Kumar is a Master’s degree student of the Big Data and Machine Learning program at ITMO University. After graduating with a Bachelor's in Computer Science and Engineering from ICFAI University in Jaipur, India, he came to St. Petersburg driven by fascination for data science and a desire to bring positive change to the world. We chatted with Sagar to learn more about his research, quantum cognition, and his first-ever hockey game. 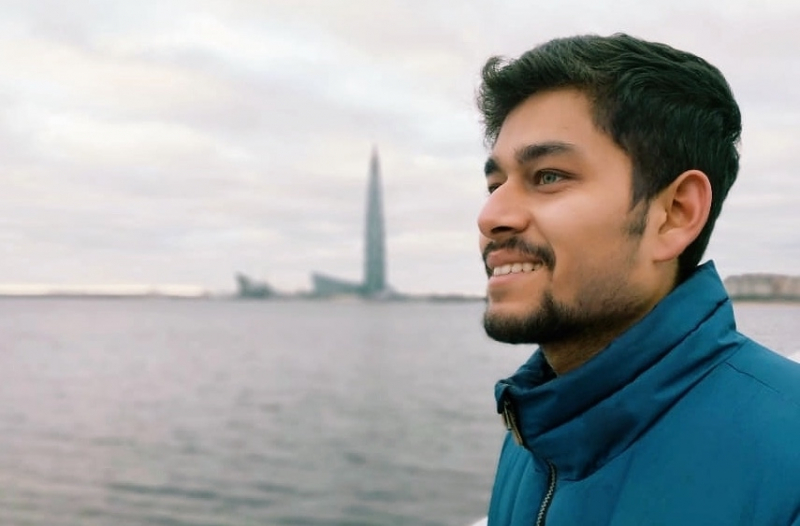 The most fascinating thing about big data and machine learning is how the massive volumes and different sources of data coupled with rapid recent advancements in machine learning have unleashed new possibilities in artificial intelligence. The proliferation of sensors that measure an abundance of different parameters and the Internet of Things have been fueling the big data explosion.

These fields are becoming more sophisticated with every passing year. We are yet to see its full potential, which goes beyond self-driving cars, fraud detection devices or retail trend analysis.

Was there something specific you aspired to when coming to St. Petersburg?

Before coming to Russia, I had only one desire: to pursue higher research abilities in my field with which to help humankind in every way possible. My family always motivated and supported me to pursue higher education and research work.

How do you think the world will change in 30 years?

The future scares many people. Climate change, a growing global population, and fewer natural resources will pose new challenges for humanity in the next few decades. But with new technologies, according to some scientists, human beings will live their lives as long as they want with the help of computational neuroscience. Artificial intelligence will become better. In short, there will be an era of humanoid robots.

What do people tell you when they learn you study big data and machine learning?

Whenever I say that I am a student of big data and machine learning, people say it's a very good and emerging field. But when I say that my specialization is in quantum cognition, then they seem amazed.

Quantum cognition is an emerging field that applies the mathematical formalism of quantum theory to modeling cognitive phenomena such as information processing by the human brain, language, decision-making, human memory, concepts and conceptual reasoning, human judgment, and perception.

And with the help of quantum cognition and some cognitive science concepts I want to help those people who are experiencing problems with their brain and body. To explain my answer I would like to share my experience: when I was in my Bachelor's internship program at IIT Gandhinagar, I was working with Vicon Motion Systems, which, among other things, is used to help stroke patients. The system helps people to walk properly and there is also equipment which helps people with their hand movements. And I want to explore new aspects of this promising field.

What did you like the most about ITMO University?

Here I found a lot of opportunities to interact with people from different countries and different fields. I can say that ITMO has some of the best talents in the world. Also, the professors and staff are very helpful.

Everybody has dreams – what would be yours?

Have you ever been to any sports events here in St. Petersburg?

Yes, ice hockey. It was great. The Dynamo team played very well and ended the game with a score of 2-0. Now I am a fan of Dynamo and ice hockey as a sport. I’ve never seen ice hockey even though hockey is the national sport in India.

How do you find Russian food compared to that of your country? Is it too difficult for someone from India to adapt to Russia?

There is no comparison between Indian food and Russian food, both have their own uniqueness. I like both cuisines. My most favorite Indian dish is dal baati, and my favorite Russian one is borsch. Adapting to the food is not a big deal for me because one of my hobbies is cooking and I know a lot of recipes.