From Sunshine to Freezing Cold: An Ecuadorian’s Experience of Russia

Despite his friends’ warnings about bears and wolves letting loose on Russian streets and meteorites falling from the sky, Michael Nuñez from Ecuador decided to come to Russia to study intelligent robotics at ITMO’s Faculty of Control Systems and Robotics. In this interview, he shares his thoughts about his exciting journey. 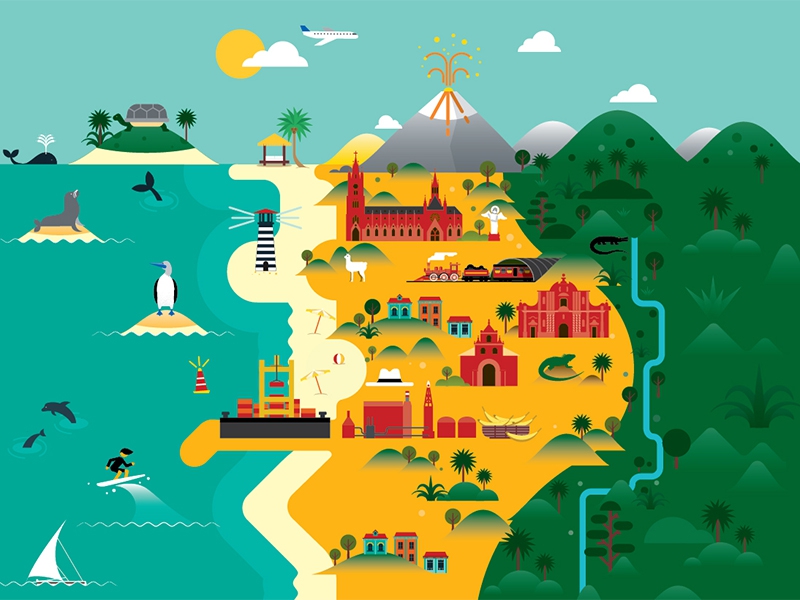 Why did you decide to come to Russia?

People often ask me this question. Most of my friends would never even think about going here. As for me, I have always been curious about this country and language, so I first came for a couple of months to learn Russian at Peter the Great St. Petersburg Polytechnic University.

Compared to Spanish, Russian is much more difficult; it has many peculiarities, such as cases, for example, or vowel reduction when O is pronounced like A. It’s such a challenge for me, and I like it.

What is your first impression of St. Petersburg?

I vividly remember how I came out of the airport in St. Petersburg and felt the cold for the first time in my life. It wasn’t freezing-to-death kind of cold, but it was enough for me to hurry back in. Then I noticed some weird letters and even tried to read and understand something.

The first landmark I saw upon coming to the city was the Hermitage, and I just wow-ed at the sight. I also really like the Park of the 300th Anniversary of St. Petersburg, especially in summer, and all the churches with their beautiful architecture. St. Pete is great because you always find somewhere nice to take a walk.

Before actually coming here, I used to believe a lot of stereotypes about Russia. For one, I was often told that all Russians are rude and unfriendly. Or some of my acquaintances in Ecuador think that there are bears and wolves walking on the streets here. Also, a couple of years ago, there was a lot of talk about meteorites falling in Russia, and some of my friends even tried to discourage me from going because of that.

Now I know that you always have to take something like that with a pinch of salt. Yes, it’s different in a way from what we have in Latin America. People don’t smile that much here, they don’t hug you on first acquaintance, but it’s only until they get to know you better. When you make friends with them, they become very much like us: they smile, joke and help you. For me, this is the best thing about being here in St. Petersburg.

The thing I still can’t get used to is the cold. For someone like me, who grew up in a very hot climate, it’s just a bit too much of a change.

How did you choose ITMO?

I didn’t really like the educational system in Ecuador and was looking for opportunities to study abroad. That’s why I started surfing the net for the best Russian universities that offered programs similar to mine. It’s worth noting that I only chose between St. Petersburg’s universities. I’ve been to Moscow as well, and I think that it’s a nice city and all, but I wouldn’t like to live there. When I found out that ITMO is the world’s only seven-time champion of the ACM ICPC competition, I decided to give it a go. The education process here at ITMO is great as it’s aimed at motivating you to attend all the classes. I really appreciate it.

I’m a first-year Russian language Bachelor’s student in intelligent robotics. I find it a bit hard to keep up with the programming aspect of my studies. In Ecuador, we don’t have any programming classes at school, and so I came here with zero knowledge on the topic, while my fellow students from Russia already knew the ropes. The maths here is more advanced when compared to the level it is taught in Ecuador, which is good. I really enjoy philosophy, but I do get lost sometimes when trying to put my thoughts into words. I’d like to get more fluent in Russian in order to start participating in debates.

Do you live in a student dorm or rent?

I live in a dorm. When I arrived, I asked if I could share a room with Russians, to practice the language. All was great, but my neighbors played computer games day and night and were extremely noisy. So I moved to another dorm, which is much quieter.

Is it expensive to live here?

I don’t find the city expensive, not in the slightest. I expected things to be much more pricey, but everything is pretty cheap here. The only items that is a bit pricey are fruits. I really miss the fruits we have in Ecuador, there are tons and tons of them there, all in a variety of colors and tastes. I also miss the seafood from back home. I decided to make a prawn ceviche once; I bought the prawns (which are, by the by, rather expensive here), and when I defrosted them, they turned out to be so small, like baby prawns!

How did your parents react when they found out that you were going to study in Russia?

My father serves in the military, and he always believed that from the three of his kids, it was I who had to follow in his steps. We have a similar character, so he was sure of it. When I told him that I was leaving to study in Russia, he dug in his heels, saying that he didn’t support my decision and that I would make a great military man, maybe even a better one that he is.

I’d also trained in a semi-professional football club, and football was the most important thing for me. But I got injured and abandoned training for studies. My dad may see me in the uniform, but I don’t want it. He did come to terms with my decision later though.

What advice would you give to international students planning to study in Russia?

Be decisive and have a clear understanding of what you want. Don’t lose sight of your goals, always remember why you chose Russia in the first place, and pay special attention to learning the language. I’d say that language is the only obstacle we as international students face, and if you overcome it, you find that studying here is as easy as in any university in Latin America. Actually, I’ve already recommended lots of my friends to come to Russia, for getting a Master’s degree here at the very least. I’m sure that anyone will find such an experience useful for their future.

What are you planning on doing after you graduate?

As of now, I plan on continuing with a Master’s degree in Germany and try to learn German. I have friends who are from there, and they’ve already explained to me quite a bit about the country and will be able to help me if and when I move there. But if this doesn’t pan out, I’d like to get work experience here, or in Europe, or possibly in the US, before I get back to Ecuador.

Three words you associate with Russia?

Magical, mainly because of St. Petersburg: the city is unbelievably beautiful.

Hospitable, and this is the main thing that everyone coming here should know. There were moments that I was invited to somebody’s home on our second day of being acquainted, and I was welcomed with a table full of food and introduced to the host’s friends. Russians are very welcoming and warm-hearted. I think it is important that foreigners knew this.